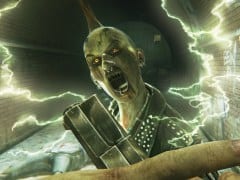 ZombiU is the most celebrated third-party exclusive on the Wii U, and as such is a title which gamers have been asking Ubisoft to bring to other systems for some time. Well, that time is now, with a PS4, Xbox One and PC port arriving digitally at a cutdown price point of £14.99. The game is missing the Wii U’s multiplayer mode and is a pretty barebones effort, but it’s still an excellent entry in the survival horror genre.

By far the biggest difference between Zombi and the Wii U original is the lack of second screen offered by the GamePad. Numerous tasks in ZombiU took players’ eyes away from the TV and onto the smaller display, ramping up the tension as the action continued in the background. In Zombi this is all displayed on the TV but is done in a way that still creates some incredibly unnerving moments. For example, the inventory management menu pops up and blocks everything but the edges of the display, so you can’t really see what’s going on for those few moments.

It’s worth noting that the minimap, formerly present on the Wii U GamePad’s screen, is now in the lower right corner of the TV screen. It’s fairly large, taking up real estate that was clear in the Wii U original, but its presence didn’t bother me. There are also a couple of new melee weapons to compliment the trusty cricket bat. The shovel and the nail bat each offer their own strengths, such as a longer reach and increased damage.

Given the price point it probably shouldn’t be a huge surprise that the port is basic. While it does appear to be running at a higher resolution than the original, the frame rate is merely adequate and the textures aren’t nearly detailed enough for a new-gen release – the dirty filter seen in the Wii U game also seems to have gone missing. Considering the effort gone into the environment design it’s a shame more wasn’t done to spruce the textures up. Modelling is also distinctly last-gen, although the lighting and effects help hide this behind a wonderfully eerie atmosphere.

Hopefully somewhere inside Ubisoft there’s a team working on a proper sequel to Zombi(U), but for now this is a reasonably priced port that is definitely recommended to anyone who doesn’t own a Wii U. Given the lack of meaningful changes for the better, the original game still delivers the best experience, even if the new-gen game looks and performs marginally better.

You play as a lone survivor, waking up in a ruined London only to discover that its inhabitants now want to eat your brains, rather than sullenly barge into you on the Tube. Perhaps ZombiU’s biggest triumph is in making zombies scary again. Games, cinema, even TV is now saturated with the undead, to the point where they feel less of a threat than they used to. ZombiU gives them their potency back. In fact, it makes a single zombie something to be feared. You’re not an SMG-toting marine, but a scared-shitless everyman (or woman) with extremely limited resources: weapons are scarce, ammo is in scant supply, and your best friend for the opening stretch is a cricket bat.

After a while you’ll master the art of the perfectly-timed swipe, judging the exact distance at which your swings are most effective. But even so, there’s still something primal and frantic about these encounters. It’s partly down to the panicked grunts, shallow breaths and whimpers you’ll hear as you bat your enemy back. The sound design here is award-worthy, not least its sparing use of music, but the developer does even more with silence. In the quiet, the slightest noise makes all the difference. You’ll hop through a low window, hear a sound and wonder whether that was merely your feet hitting asphalt or something more sinister lurking in the dark. You’ll be desperately prodding your scanner to ping the environment to see what it is, and you can’t even be sure that’ll help you: red marks on the map could be a zombie, but it could just as easily be a crow, while seemingly dead corpses can and will spring back to life.

Scripted scares, meanwhile, ensure that you can never feel entirely safe. You’ll retrace your steps in an area you cleared out only to find a zombie at the top of a flight of stairs. You’ll pass through a refrigerator with hanging meat and a dangling walker that isn’t as dead as she first seems. There’s an astonishingly tense sequence in a nursery with a shock you can see coming a mile off, but which is nevertheless so expertly timed that it genuinely left me shaking. I wouldn’t say they’re cheap, either: the game uses them sparingly enough that they only contribute to the sense of overwhelming dread you feel as you enter a new area. Elsewhere, there’s a bravura set-piece that sees you barricading the safehouse from a horde of zombies that matches Resident Evil 4’s famous cabin siege for blistering intensity. It’s an early difficulty spike that leaves you in no uncertainty as to how hostile this world is.

ZombiU ups the stakes further with its treatment of death. Get cornered by as few as two zombies, and you can easily end up being forced to the ground as they snack on your face. Death is final, so when you awaken, you do so as a new survivor, your immediate objective being to retrieve the items from the reanimated corpse of the character you were just playing as. Die often, then, and you’re only making it harder for yourself. You can opt to ignore recovering your spoils, of course, but in this world it feels wasteful to do so. There’s something oddly poignant about pulling the trigger on the 37-year-old shop assistant you spent the last two hours with. Indeed, knowing nothing more than their name and occupation is enough for you to form a strange kind of attachment to them, particularly those who last longer than five minutes. They all have slightly different abilities, too: some can run faster, while others are more efficient combatants, a neat touch that reminds you you’re not just respawning but inhabiting another body.

So rich is the atmosphere that I genuinely found ZombiU hard to play for more than an hour at a time. There’s a desolate bleakness about the world and the way it’s presented: with washed-out colours, dim lighting, and a sickly green-grey tinge to the image you’d hardly say it’s beautiful, but there’s an authentic, lived-in ugliness to the world that more than compensates for any minor graphical shortcomings.

It’s a pity, then, that ZombiU falls victim to the same issues that blight many of its cinematic inspirations. The desire to escalate the action means the closing stretch isn’t nearly as frightening as what came before. Zombies are more plentiful, weapons are more powerful, and while it’s still a fight for survival, the horror element has by now lost much of its impact. A reliance on more fantastical elements, meanwhile, sits uneasily with the realism – if that’s the right word when talking about the dead roaming the earth – elsewhere.

ZombiU has more than enough value as a solo experience to strongly recommend. It’s a welcome return for true survival horror, where death is around every corner of this brutal world you timidly creep around.

This is a reasonably priced port that is definitely recommended to anyone who doesn't own a Wii U.
8 Great survival horror gameplay Genuinely scary at points Visually definitely last-gen Basic port

The Wii U horror heads to PS4, Xbox One and PC in…

The Wii U horror heads to PS4, Xbox One and PC in…