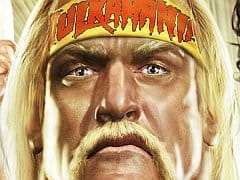 Nostalgia is a beautiful thing. Rose-tinted goggles make us all long for the days when we ran home from school so fast your chest felt like it might explode. Why did we willingly do such a thing? To put the TV on and watch, well, there’s an endless list of fondly remembered 80s shows. Here’s some of mine: Transformers, Thundercats, Airwolf, The A-Team, Defenders of the Earth, Dungeons and Dragons, Knightmare and… WWF.

Which is now WWE of course, a result of the World Wildlife Fund and a few angry letters, I’d imagine. For me, the WWF was all about Hulk Hogan (55, TV star), The Ultimate Warrior (49, retired) The Undertaker (43, still wrestling), Big Boss Man (died of a heart attack age 41), The British Bulldog (died of a heart attack age 39) and Bret “The Hitman” Hart (51, retired). And, as a young gamer, the WWF was all about the WrestleMania games on the NES and SNES.

WWE Legends of WrestleMania, THQ’s latest Yuke’s-developed wrestling game, has one goal: to rekindle all those fond childhood wrestling memories guys like you and me thought were lost to time and YouTube. Its roster of wrestlers is a who’s who of superstars made famous by WrestleMania throughout the 80s and 90s. It allows you to relive those famous matches in virtual form, and feel your childhood, those long Sunday afternoons spent “practising” body slams in the park, come rushing back in a veritable flood of euphoric nostalgia.

Before each match a live-action montage of archived footage plays, setting the scene for the match. It’s real “from the vault” stuff, and includes all that “to the camera” trash-talking and finger pointing that defined WWF during the glory days. Shawn Michaels has a full head of hair, Undertaker is a lean, young machine, packed stadiums, catchphrases, slogans, spectacular signature moves, cheesy entrance music, it’s all there, and it’s great fun to watch and hear.

In-match, Legends of WrestleMania plays very differently to THQ’s current SmackDown vs. Raw series. The WrestleMania Tour matches ask you to win, of course, but they also challenge you to complete a number of objectives designed to coerce you into recreating moves that were actually performed during the real match on which they’re based. So, for example, one of the objectives in the Hulk versus Andre the Giant match is to body slam Andre, just like he did at WrestleMania in the early 80s. There are loads of these objectives for each of the 19 playable WrestleMania matches in the game, ranging from simply damaging your opponent before he damages you, to more complex actions based on from the top rope moves, strong grapples, contextual attacks that use the environment and finishers.

The objectives tie into the new, some will say dumbed down but I say streamlined, control system. Legends of WrestleMania requires only the left thumb stick or d-pad and the four face buttons to play. The triggers or shoulder buttons aren’t needed. On the Xbox 360 (the version tested) X punches, A grapples, B runs/pins and Y counters/blocks. If you want, you can make do with that and get plenty out of the game. The game’s heavy on quick time events. Like marmite, you’ll love ’em or hate ’em. Irish whip your opponent, for example, or perform a finisher, and a QTE triggers that sees both players try to press the right button first. It’s actually decent, albeit simple fun, and, because the more spectacular moves require QTE chains, you’re able to switch proceedings to your advantage mid chain if you beat your opponent on a QTE. In many games QTEs simply get in the way of the action, focusing the eye on a small part of the screen when all you really want to do is absorb the entire cinematic. This is something that Legends suffers from, but at least the QTEs are competitive.

Layered on top of the new grapple-based system is a three-tiered fighting-game-esque meter that fills as you do damage to your opponent. When you hit level two better moves become available. At level three your finishers (Y and B) can be performed. Some objectives require moves that only become available when you’ve reached a certain tier, so you have to spend some time beating up your opponent before you can get that all important gold rating.

While Legends of WrestleMania never reaches anything beyond arcade style complexity, there is a decent amount of depth for more hardcore fans to explore. Holding down X does a more powerful strike, but it takes longer. Holding down A does a strong grapple, but it takes longer. Without a torso outline displayed on the HUD, as in the SDvR series, matches are more about overall damage, about making your opponent groggy with quick strikes, and therefore vulnerable for a short period of time to slower but more damaging moves. The idea is to reduce your opponent’s health meter to the point where they will struggle to mash the buttons quickly enough to escape a pin. The Taunts (X and A) system adds another layer of strategy. A taunt consumes a tier but triggers a temporary boost. This boost improves your character in a number of ways, including damage, speed and the rate the tier meter fills. In a funny way, the simplified controls lend Legends a more fighting game feel, and that’s welcome.

Inevitably, though, some fans won’t like the new control system. They will say it’s been dumbed down, that the game is for wrestling noobs. There is a degree of truth here, but the new approach makes Legends much more fluid and intuitive than recent iterations of the SDvR series, one that’s famously difficult to pick up and play. The game isn’t built using a tight fighting game engine – the collision detection is awful and movement is sluggish – so a more simple control system fits better. Put simply, I had more fun with Legends of WrestleMania than SDvR 2009, and much of that was down to the new controls.

You can see why THQ has taken this approach. Legends of WrestleMania isn’t just for hardcore wrestling fans who religiously buy the annual SmackDown vs. Raw games. It’s for the post-pub crowd, for people who perhaps play only certain video games, football games perhaps, but fancy a wrestling trip down memory lane that’s as much of a laugh as it is fun. With a few mates round, and over a few drinks, Legends provides an experience unlike any other. In many ways I’d be more inclined to pop THQ’s effort into my console in such a situation than Street Fighter IV.

Beyond WrestleMania Tour, Legends is packed with modes and features that fans of SDvR have come to expect. There’s full online integration, loads of exhibition match types, including the hilarious 30-man Royal Rumble (Andre the Giant versus The Rock? No problem!). The game is heavy on unlockables – costumes, modes, archived movies – everything you do seems to unlock something somewhere in the game. The Create a Legend mode does exactly what it says on the tin, and pits your wrestling Frankenstein against waves of wrestlers in the Legend Killer mode. There’s even an option to import your created superstar, and the entire roster, from SDvR 2009, so all that hard work done in the last game won’t go to waste.

Graphically, Legends impresses and befuddles in the same breath. The crowd actually looks good, from a distance, and the game does a good job of capturing that packed stadium feel the archived footage that plays out before matches demonstrates. The presentation, largely, is impressive. The main menu screen is designed like an actual vault, and entering the Hall of Fame sees the camera swoosh into a room packed full of trophies and statues. Unfortunately, the menus outside of this are woeful, reminiscent of a shoddy “last-gen” game, and the loading is annoying at best. The wrestlers themselves are well detailed, but designed to be almost caricatures of their real-world counterparts. Hulk Hogan is the worst offender in this respect. He’s absolutely huge – his torso is about a mile wide and he stands taller than Andre the Giant, which, frankly, is ridiculous. If you’re looking for realism, look elsewhere. Legends feels in every way like a childhood memory remembered with a distinct lack of accuracy. It’s 80s and 90s wrestling how we remember it to be, not how it actually was, just like we remember tiny primary schools as huge castles and parks as entire countries.

As a straight up video game, Legends is a clunky, sluggish experience, like the SDvR games before it. But the new control scheme is, for me, a change for the better. I for one wouldn’t mind a similar system employed for SDvR10, although I’d imagine hardcore fans might not agree. At the end of the day, though, what’s most important is that Legends does exactly what it set out to do, and that’s provide a rose-tinted nostalgia trip down 80s and 90s wrestling. If you’re one for watching old episodes of Transformers on YouTube, or those Mr. T Snickers ads make you long for the days when the A-Team were the talk of the playground, Legends of WrestleMania is for you.

Like WWE? Want to see the current Superstars live in London? Enter this competition to be in with the chance of winning a pair of tickets to the WWE WrestleMania Revenge Tour at the O2 London. There’s also copies of the game on offer to the winner and five runners-up.

If you're one for watching old episodes of Transformers on YouTube, Legends of WrestleMania is for you.
8 Real archive footage Fun trip down memory lane Arcade-style gameplay intuitive Still clunky and sluggish