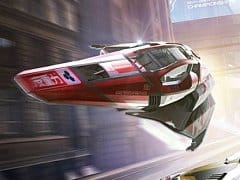 Few games have defined Sony’s PlayStation brand over the ages like WipEout, with SCE Studio Liverpool’s (then Psygnosis) futuristic racer arriving with the original PlayStation in 1995. This high-speed racer wasn’t just a vision the year 2052; it combined a techno soundtrack, sleek 3D models and a blistering sense of speed to make impressionable young teens feel like this was the future of gaming itself.

Since that fateful 90s launch, the franchise has been one of the shining jewels in Sony’s first-party crown, used to add a necessary touch of pizzazz and high-speed spectacle to launch line-ups and the latest hardware. WipEout 2048 is a prequel of sorts, then, designed to showcase the origins of the series while simultaneously flaunting the impressive the-future-is-now power of the Vita hardware.

And, yes, it’s certainly a sight to behold – the screen is packed with so much detail it’s actually difficult for your eyes to process the on-screen mix of light trails, twisting architecture and rival craft. The cost of all this detail is framerate, and occasionally it feels like a slight step back from the series’ last iteration, WipEout HD, which catapulted players through some buttery-smooth 60fps racing.

But WipEout is as much about spectacle as it is speed, and 2048 opens by conjuring up a near-future vision of New York that sits closer to home than the more alien (but visually arresting) vistas of previous games. It’s a different aesthetic but not an inferior one, as the game opens by showing you the first of many breathtaking moments with The Empire Climb, its track boosting your way to the top of the 102-story landmark before blasting you down a vertiginous drop and tunnelling you a wall of speed boosts just as you reach the ground. It made me recall my experience of the Oblivion rollercoaster at Alton Towers, which is no bad thing for a racer that’s always had its sights set on inducing vertigo.

A handful of gentle introductory races ease you into the game, though nothing can prepare you for when the difficulty level ramps up considerably in the second of the campaign’s three year-long seasons. WipEout has always been a brutally hard racer, and 2048 is no exception, even if the usual controller configuration has been reworked so that there’s now only a single button in charge of the airbrake.

The speed ratchets up as you progress into the 2049 and 2050 leagues, class categories now defined with a simpler C (Venom) to A (Phantom) range, and to get an Elite Pass in the second half of the game you’ll need to learn how to hit the apex of WipEout’s unique racing lines without the aid of any in-game assists. This is even more necessary in the neon-lit Zone mode, returning from WipEout HD, which ramps up the speed to ridiculous levels and tests the abilities of even the most talented players. Classic tracks like Sol and Altima start to rear their head as you advance through the timeline, which will comfort veteran players whose muscle memory will still be able to cope with WipEout’s advanced track-specific tricks and risky shortcuts.

WipEout’s 2048’s tracks have been widened to accommodate for the Vita’s less precise analogue sticks, and mastering the twitch of these Vita-specific controls is a game unto itself. There’s also a renewed spotlight on the frantic bedlam of combat events, giving the classic teams – from Feisar to Qirex – their own various objective-based loadouts and limited weapon selections. Weapon pads have been split into offensive and defensive varieties, which give aggressive brawls an appreciated sense of strategy, but there’s still something about the mess of combat that detracts the single-player game from its purest form of racing, which is still where WipEout 2048 is at its best.

This focus on combat is definitely needed for online play, however, as a race-focused online world would ensure an aggressive and entirely unapproachable game for almost everyone. Studio Liverpool adds a touch of flair in WipEout 2048’s online modes, which masks its random matchmaking under a pseudo-campaign of event-specific objectives that rarely revolves around crossing the finish line first. It’s a bold step, though possibly not the tastes of strict racers, but one that offers its own benefits at an admittedly heavy cost to those who just want to zip around a few tracks with mates from their Friends List.

The online code holds up well, though, allowing you to get into races easily provided you’ve got a stable Wi-Fi connection, and there’s always the competition of getting (and keeping) pole position in the online leaderboards.

Studio Liverpool also reasserts its uncanny ability to perfectly match a contemporary soundtrack to its games, though the amount of tracks is a little limited and there’s no support for your custom tunes.

The loading times, however, are simply unforgivable. Running the game from memory stick, I routinely found myself waiting over 50 seconds between selecting and starting an event. That’s about 40 seconds too long, and it’s more than enough to completely stall the ability to comfortably play this game on the go. I found myself having more than enough time to check my iPhone and play a couple of Triple Town turns between races, which is surely something Sony would ideally want to avoid.

This isn’t the best WipEout game in the series, but it’s certainly a positive endorsement of Sony’s latest portable hardware. But for a series that’s traditionally been used to extol the virtues of advancing technology, it’s perhaps a little amusing that WipEout 2048’s best moments are hidden behind those ever-impressive layers of flash and spectacle, and hitting a do-or-die speed pad that’s the difference between taking the corner perfectly and smashing your shiny future-bonnet into a wall is as thrilling in 2012 as it was in 1995.

Wipeout returns for the PS Vita, use tilt features, touch controls and…

Wipeout returns for the PS Vita, use tilt features, touch controls and…