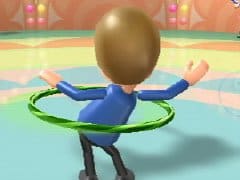 Games as a form of exercise have been around for some time. The DDR games even included a calorie burning stat in later releases, and everyone has surely seen those crazy exercise bikes that hook up to your PS2 and act as the accelerator pedal – the faster you pedal the faster your car moves. We’ve even seen the odd exercise routine game, but none have really managed to gain the attention of the masses. If anything could then, it’s Nintendo’s Wii. Already a cultural phenomenon, Wii Fit looks set to get gamers and non-gamers on their feet.

The most important thing to note is that you’re not going to get anything out of Wii Fit if you’re embarrassed about standing in the middle of a room and looking like a fool. You’ll be stood on the Wii Board for most of your time with the game, using your balance to control a series of tests and mini-games. Whether you’re ski jumping, moving some marbles into holes or walking a tightrope, you’re essentially just shifting your weight with as much control as possible.

Outside of these there are numerous aerobic exercises that have you running on the spot, with the Wii Remote in your pocket determining your effort, or stepping on to and off the Wii Board. You’ve also got a series of Yoga exercises that help improve your suppleness and muscle exercises like press ups. All these combine to, in theory, make you fitter. What’s unquestionable is that these exercises get you moving – something your average video game simply doesn’t do. Even if you’re likely to get a much better workout by heading to the gym, Wii Fit will give you a work out that might otherwise have never happened – which has to be a good thing.

When you start the game you enter your height and the Wii Board determines your weight, which are used to work out your BMI. You then see how overweight you are and decide what target to set yourself in terms of weight loss. As with Nintendo’s other smash hit casual game Brain Training, Wii Fit keeps track of your progress and shows you a graph on how you’re progressing – and yes, you get to stamp the calendar when you’ve carried out your daily tests.

For some this whole fitness regime will be enough to warrant a purchase, but others will want more of a game. Wii Fit isn’t jammed full with mini-games, but there are enough to make it enjoyable for everyone, not just fitness fanatics. While the Yoga and muscle workouts aren’t going to be high on the list of fun games to play with mates, the balance games and aerobic exercises are more fun than they look. With high score leaderboards and numerous difficulty levels games like ski jumping and tightrope walking become quite addictive, and you won’t have played anything like it before.

All your time with the game is tracked and this unlocks new mini-games and exercises. It doesn’t take much to unlock them all, and once you do you could easily entertain yourself for a few hours a week. This certainly isn’t a game to play every day – if you’re only interested in having fun – but in a room full of friends everyone will want to have a go, no matter how silly it looks. It’s just a shame that Nintendo hasn’t included a Party mode for exactly this purpose.

At £70 Wii Fit isn’t cheap and as such can’t really be recommended unless you plan on using it to its full potential. It’s not a solution to weight problems, but it’s definitely a good addition to your fitness routine. The mini-games are really just the icing on the cake, opening Wii Fit up to everyone. People of all ages will love how you control the games using nothing but your balance and competing for new high scores is great fun. Once again Nintendo has delivered a product that stretches beyond gaming, with an appeal broader than anyone else seems capable of creating.

Once again Nintendo has delivered a product that stretches beyond gaming, with an appeal broader than anyone else seems capable of creating.
8 The mini-games are great Makes you work out The Wii Board works brilliantly Not enough gamers' games