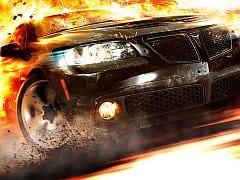 Given Midway’s heavily publicised financial problems and Wheelman’s late shift to publisher Ubisoft, you’d be forgiven for thinking this is a game to avoid. We certainly had our reservations, assuming it would be a mildly entertaining action romp that sat somewhere between Driv3r and GTA 4 – we didn’t expect it to sit so close to GTA 4 in the enjoyment stakes. You’d be hard pushed to find anyone naming this as game of the year come December, but Midway Newcastle has succeeded in making a damn fun game with some of the best driving mechanics we’ve ever seen.

By far the biggest initial draw Wheelman’s going to have is its star, action hero and all round hard man Vin Diesel. He plays Milo, an undercover agent sent to Barcelona to work as a wheelman for hire in an attempt to get info on various crime organisations working in the city. You’ll take jobs from anyone, so it’s an ideal ruse to get close to the people that matter, assuming you’re good enough at your job. While Wheelman tries to tell a decent story it struggles to be more than a platform for Milo’s existence and really only serves to bookend the missions and to give some kind of structure to proceedings. GTA 4 this is not, but then it’s not really trying to be.

Core to everything that’s good in Wheelman is, perhaps predictably, the driving. Midway Newcastle has ditched any notion of realism in favour of a full-on arcade-style handling model. Milo is able to powerslide any car, pull off insane handbrake turns and generally nip about at speed without needing to worry too much about real-world physics getting in the way. It’s not quite Crazy Taxi, but there’s certainly a similar feel and general belief that you can do just about anything while on two or four wheels.

Because Wheelman isn’t your normal open-world action game, with most of your time spent in a car or on a bike, combat had to be possible while driving. At its most basic you can auto target enemy vehicles and fire at them with a gun (the steadier you drive the easier targeting is, and it helps to get Milo firing out of his near window), but the really good stuff comes from vehicle melee and a number of special moves activated once you’ve filled your Focus Gauge by driving like a nutcase.

First of all you need to get into a car or on a bike. The normal way is to walk up to some unsuspecting guy in the street and jack him, and that’s possible here, but a bit dull. Milo prefers to do things while on the move (a wheelman can’t waste time), so he likes to open his car door and leap onto a vehicle ahead. By driving your vehicle in close proximity to the rear of another car and holding down the leap button, Milo gets into position (crash or take a sharp corner and he’ll get back in the car, so careful driving is key) and a coloured arrow appears above your target vehicle. As soon as it turns green you let go and he leaps onto the rooftop of the new vehicle, slides through the window, kicks out the driver and continues on his merry way. Very cool indeed.

No matter what vehicle you’re in (hatchback, sports car, truck, motorbike, etc) a simple flick of the right analogue stick to the left, right or straight ahead will cause it to violently jolt in that direction, slamming whatever gets in its way. Think of the takedowns in Burnout, only with more aggression. The vehicle you’re in obviously plays a big part in what you can do, so you’re not going to be doing too many slams while riding a bike, but get behind the wheel of an articulated truck and there’ll be plenty of exploding enemy vehicles before too long.

This is just one part of the many combat options in Wheelman. By using up the energy in your focus gauge Milo can slow down time and take aim, while still driving. Pressing up on the d-pad will initiate an Aimed Shot, allowing him to target whatever’s ahead or viewable from the side windows, whereas pressing down will result in a Cyclone shot, causing the vehicle to spin 180 degrees and giving you a shot at what’s coming from the rear. Weak points on enemy vehicles are highlighted, giving you the chance to blow them up in typical Hollywood movie fashion. You’ll never tire of pulling off the moves – our favourite is to do a 180 degree spin while heading off a jump, resulting in a slow motion shootout while driving backwards in mid-air.

There’s never a dull moment in Wheelman, and the designers have done a good job of adding variety to a game that could have got old very quickly. You’ll have to transport a massive truck across the city while being attacked by goons, creep through the side streets to evade the cops (there’s a GTA-style star-based wanted system in place here) while trying to get a “friend” to a bomb disposal expert, hijack heavily armed vehicles protected by a police escort and trash advertising put up throughout the city. And this isn’t all you can do, with fun little side missions always available if you want a break from the story.

By taking part in the many side missions on offer (there really are loads, with more and more opening up as you meet the game’s full cast of characters), which range from taxi jobs to wanton destruction and street races, you’ll earn upgrades to vehicle performance, vehicle attack power, vehicle health and your Focus gauge. These upgrades make for a nice bonus reason to play through the non-story-based missions, but you’ll want to play them for the sheer thrill anyway. Side missions are often little more than filler in open world games, but here there are ranks to achieve and clear rewards that make them a real time sink.

And then there’s the on-foot combat. It more or less had to be included as guns sell games and this is one of Hollywood’s premier action heroes we’re talking about, but it’s still by far the weakest aspect of Wheelman’s action-packed gameplay. You can fire a weapon by locking onto an enemy, switching targets with a flick of the right stick, or aim with more precision. Perhaps it’s GTA 4’s influence seeping into our thoughts, but the lack of a cover system here makes the on-foot sections feel dated. Milo can duck, allowing him to stand behind cover and pop up when firing, but it all feels slow and awkward.

What’s also quite jarring is how dull the on-foot action is compared to when you’re behind the wheel of a car. Had Midway Newcastle thrown in some of the mechanics from Midway’s incredibly fun Stranglehold, we’d have had a game that could have rivalled the big summer blockbuster movies in terms of sheer spectacle. As it stands you’ll have to play through the on-foot sections to progress, but will likely be very glad to get behind a wheel again.

Built using the Unreal Engine 3, Wheelman is no slouch in the visual department, running at a decent clip and featuring an impressive amount of destruction. There’s the odd frame rate slip up (something that’s sadly more of a problem in the PS3 version) and characters look fake and plastic, but on the whole Wheelman looks rather good. Barcelona looks great, albeit not quite as busy as it probably is, there’s decent environment variety across the map and loading times when you hop straight to missions aren’t too bad.

Audio work is solid, with Vin Diesel providing his gruff action man tones for Milo and the supporting cast doing a decent job too. For some reason we felt Vin’s voice didn’t quite gel, standing out a little from the rest of the cast, but it’s a minor issue that others might not even notice. The soundtrack (which is played over your vehicle’s radio stations) is nothing spectacular, especially compared to what we’ve seen in other open world games, but it’s certainly passable.

Fun can be found in the simplest of things, and Wheelman nails car combat to the extent that it carries the whole game on its wheels. There are clear issues, with re-spawning enemy drivers causing a whole heap of hassle at times, and the aforementioned on-foot combat is forgettable at best, but for the most part you’ll want to stay behind the wheel. There’s enough here to keep you going for some time too (certainly longer than your average action game), so if the idea of a crazy, almost stuntman-like car-based action game sounds like your kind of thing, Wheelman shouldn’t be passed up.

If the idea of a crazy, almost stuntman-like car-based action game sounds like your kind of thing, Wheelman shouldn't be passed up.
8 Loads of things to do Looks pretty great Brilliant in-car action On-foot combat isn't great