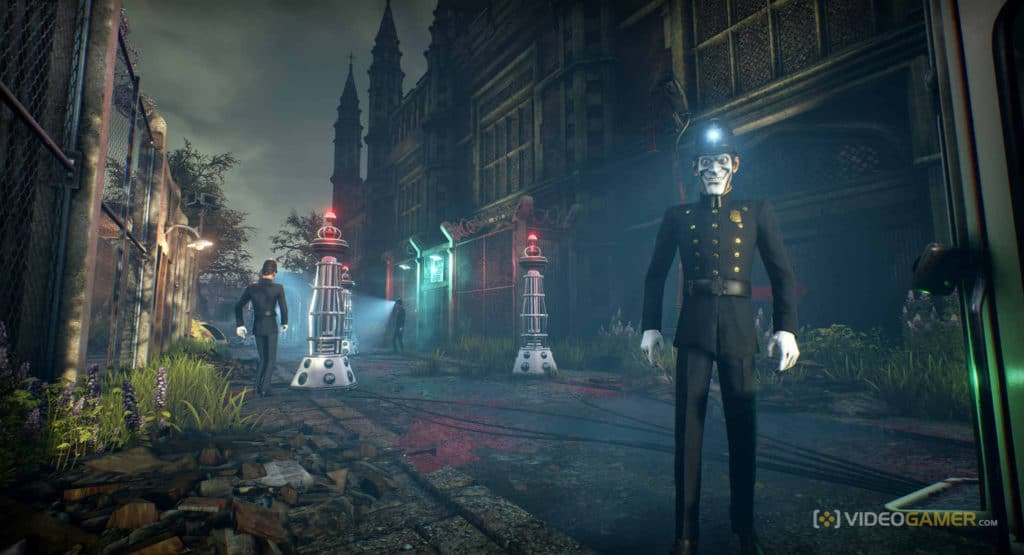 Mashing a myriad of ideas together isn’t always best practice. It can sometimes create magic, and sometimes it can cause a mess. A narrative-driven, survival-based, RPG element-having, melee combat-heavy, exploratory mammoth, We Happy Few ends up on the untidy end of things on most counts. It’s a shame, really, because Wellington Wells’ drug-fueled tale is a neat one that becomes more engrossing as it goes on.

In this quaint British town, in an alternate version of 1964, everyone is hopped up on happy pills in order to forget the atrocities perpetrated by its inhabitants after the Second World War – in which Germany was victorious. Everyone pops these little pellets of Joy, as the memory-suppressing medicine is called, and it rids them of all their regrets, and envelopes them in a gleeful haze. Propaganda broadcasts echo throughout the town, and Joy-infused water flows freely from the taps; the citizens of Wellington Wells, or Wellies, can’t escape the sheer, unadulterated jubilation, thus blinding them to the fact that their neighbourhood couldn’t be further from utopia.

The three characters you assume control of over the course of the game’s three acts are wise to this, however. Journalist Arthur Hastings has stopped taking his Joy and is looking for the brother he hasn’t seen in years; Sally Boyle, a skilled chemist, is creating a special brand of the drug for the local police force, whilst also seeking an escape route; and the war vet, Ollie Starkey, is holed up in his hideout, away from the Joy-addled townsfolk, with only an imaginary friend to keep him company. Each story strengthens as it unfolds, with impactful twists aplenty and strong vocal performances from the primaries. There are dips in the middle of each chapter, as the gameplay itself gets in the way of some engrossing character development, but uncovering We Happy Few’s sinister undercurrent is wonderful. Well, watching it play out it is, at least. 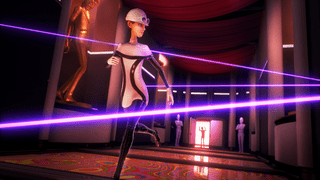 We Happy Few was a survival game before emerging from Early Access, and in its released state it retains a lot of those ideals: if you’re hungry, you’ll want to eat something; if you’re gasping for a drop of water, be sure to take a swig from your canteen; if you’re knackered, you should probably find somewhere to throw yourself down for a few hours. You won’t die of thirst, though; instead, your stamina is capped, meaning you’re unable to sprint or swing your weapon as much as you can on a stomach full of scavenged sandwiches.

The cost of a rumbly tummy or a sleepy head is quite minimal in the big scheme of things; it’s merely a frustration when a prompt pops up on screen, urging you to cycle through the messy in-play inventory for some sustenance, or wander the barren landscape for a bed. You could just swallow a Joy and let that take you, I guess: another thing you have to manage.

In order to fool folk, and pass through certain checkpoints, you have to take one of the pills that has killed all sensibilities in the community. When you do, your surroundings become more vibrant, everyone looks more jovial, and it’s just a nice time all ‘round. Like all good drugs, and some rubbish ones as well, the effects don’t last forever and things get nasty when you’re coming down. You’re better off finding a quiet place to bury yourself when suffering withdrawals, as people will recognise that you’re not in high spirits, and attempt to take you down. Take too much Joy and your stamina and attacks are reduced. It wears off, though, so like everything else you have to manage in We Happy Few, it doesn’t really matter all that much. Unlike what you’re wearing – there is a dress code to uphold. 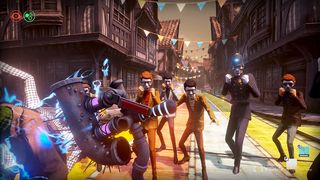 You’ll draw the ire of Bobbies (the guards of Wellington Wells) if you saunter around the main street with rags on, and will have the outcasts on your back if you enter the Garden district wearing the finest threads. Those who frequent the bawdy S&M club will get suspicious of you if you’re not donning some figure-hugging rubber, and you better get your hands on a boiler suit if you want to access some maintenance areas. By grabbing materials in bins, countertops, and cupboards, you can craft these items of clothing, as well as healing balms and a whole host of weaponry.

When it comes to crafting, Ollie, for example, prefers bruteforce over the more delicate approach, so he isn’t that handy when it comes to chemical concoctions; Sally isn’t as robust, and opts for the stealthier approach, utilising her penchant for alchemy to knock out Bobbies; whilst Arthur, the first playable character, is a sort of amalgamation of the two. Because of this, I didn’t find myself changing up my style for either Sally or Oliver, all that much. There’s no obvious benefit to altering your approach with enemies when you have similar skill trees at your disposal over all three chapters. It all comes down to persistence when an adversary spots you, anyway.

Upon detection, you have two options: leg it, or swing for the fences. You’ll win the majority of foot races, so that’s not an issue if you want to rush for the foliage you can hide in (you can’t hide in all bushes, because… well, just because), and combat boils down to wildly whacking the unlucky one in the face, blocking when you notice them winding up for an attack. Encounters become mundane within seconds. Less, even. With a semi-decent arsenal, you can take down pretty much whomever you like. 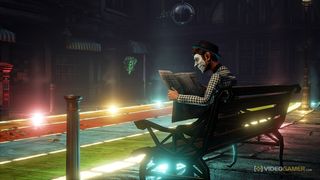 Although, if you’d like to sneak around the bliss-filled denizens, you can often do so at your leisure; the AI is fundamentally flawed. Guards’ patterns are easily read, and sometimes cover such a small patch that you’d be forgiven for wondering if they keep going back to a particular flower bed because they’re sure their keys have fallen in there. I definitely came across instances where they appeared to have 21/20 vision, but mostly they seemed like a population that wore the wrong prescription the day I popped into town. During the occasional night-time curfew, I was crouched within two feet of a Bobby, almost daring him to get a glimpse of me so we could begin our Benny Hill chase over this barren land. And my God, it is a bleak.

Missions generally revolve around you fetching items for people who are clearly too lazy to do it for themselves, sending you great distances across this desolate waste of space. As well as making the more captivating quests stand out, this shows up how empty We Happy Few is. There are side quests, if you feel so inclined, but the game is bloated enough as it is when it comes to the main narrative, which has you toing and froing all across the overblown map. There aren’t enough compelling reasons to explore your environment.

Once the forthcoming Sandbox mode is added, and a countless number of bugs are addressed in patches, then maybe We Happy Few will be more of a complete game. I somehow doubt they’ll update it with a more concise story that doesn’t have survival elements, though.

Available on: PC [reviewed on], Xbox One, PlayStation 4

While We Happy Few's story contains some genuinely wonderful twists and turns once it gets going, it's dragged down by frustrating survival systems, shoddy combat, and an empty world.
4 Engaging narrative Pointless survival elements Massive, empty open world Boring combat