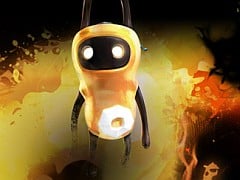 Chances are that you’ve already judged Warp by its digital cover. Looking at Zero’s vaguely bug-like features and lack of pupils, you might be inclined to think that the game’s player-character is adorable; alternately you might not like him as much for the same cutesy reason. I’d put money on one constant here, though; you’ll mistake Warp for a kids’ game.

But developer Trapdoor makes its point the first time you warp (hence the title, duh) into the body of a scientist or soldier and watch as they balloon up and explode in a bombastic, splattery mess. Warp’s cartoony trappings are more in step with Team Fortress than Pixar, and though the violence at work is all (more or less) comically incidental, Warp isn’t going to appeal to a younger players’ sense of pacing, either.

Basically, if E.T. was given the ability to teleport into inanimate objects and had to escape a maze-like facility for Martian testing, you’d kind of have an idea of what Warp is going for. Zero is extremely underpowered, so the focal point is on puzzle-solving through physics, item manipulation and stealth, or some combination thereof. Death is also a one-hit kill, and the only upgrades available improve attributes like sneaking and your powers of physical trickery.

Initially, the puzzles blocking your progress out of the facility aren’t much challenge. Doors up to a certain thickness can be warped through, and Zero can avoid patrolling soldiers by warping into barrels. Guards can also be warped into, and this puppet mastery can (and mostly does) result in the aforementioned explosion of blood and severed limbs. You’ll need to use your exploding skill on regular objects from time to time, but obviously it’s not quite as squishy and gore-laden.

Zero’s obstacles don’t stay simple for long, though, and after the humans learn of Zero’s weakness to water they develop appropriate weapons and shields, and outfit parts of the facility with water barriers. To compensate, Zero learns to make ghost copies of himself as a diversion, before learning how to swap objects when the timed mines and lasers are introduced into the game world.

You get the idea. Eventually you’ll be jumping from conveyor belt to conveyor belt using indestructible containers as cover to pass through sets of lasers while juggling timing based traps (remember: one hit kills).

That said, Warp is the kind of game where you rarely run into particular moments that will frustrate or puzzle you. The overhead room-by-room design, frequent checkpoints and extreme ease of death (you will die a lot) make it blend together as a cohesive whole, but that also means there isn’t a whole lot that stands out, either.

Repetition is probably Warp’s biggest issue. Without much in the way of enemy and environmental variety, it can start to feel like a chore at times to make your way through the facility. Puzzles and progression blend together. Unfortunately, Warp’s challenging difficulty forces the game to devolve into decidedly cheap scenarios.

There are some incentives for those who want to explore for grubs, which aliens apparently love (and more importantly let you buy upgrades). Still, scouring the quasi-Metroidvania map didn’t hold that much appeal to me, since I ended up not needing any more abilities than I couldn’t already afford. This is really the kind of game where your motivation is going to stem almost entirely from physically moving from one room to the next.

Bizarrely, there is a strange dichotomy between puzzle difficulty and enemy or stealth situations. The puzzles, even at their most complicated, are often focused as much (or more) on timing rather than creative brainteasing. Conversely, since Zero is so vulnerable, any combat situation is stressful (particularly when soldiers start surrounding themselves with cylindrical water shields).

If you’re a fan of puzzle design and adventure games, you should still give Warp a shot. Yeah, it’s a little bit of a letdown that Zero’s abilities are so limited and there will be some weird trial and error because he’s so fragile, but the game is still a pretty delightful conceit with superb art direction.

There are little moments, like Zero being sucked through underwater transit tubes or fighting an alien boss that’s been traumatized by too many lab experiments, that really stick out. And watching the abrupt, messy disintegration of your hapless foes never gets old.

If you're a fan of puzzle design and adventure games, you should give Warp a shot.
7 Hilarious art style Fun conceit Not much incentive for players Occasionally cheap

A stealth action game set in a top-down sci-fi world.

A stealth action game set in a top-down sci-fi world.