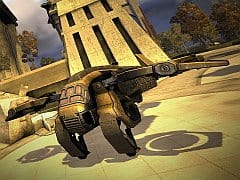 If by any chance you’ve stumbled upon this review without any knowledge of the fully-fledged Warhawk game to which Omega Dawn is an add-on, allow me to enlighten you. Focussing entirely on online multiplayer battles, the game set two fictitious nations, the Eucadians and the Chernovans, at each other’s throats. This involved huge and busy battles fought in the air in ships that can switch from jet plane to helicopter, and on the ground on foot and in numerous military vehicles. Most surprising of all, it made Sixaxis control work with panache.

Warhwak is frantic, accessible, and feels as much like bringing a set of chunky plastic army toys to life as throwing yourself into a war full of serious hardware and complex strategy. Still, Warhawk is a game of skill, and requires plenty of teamwork and thoughtful play, but at the same time it is filled with fast-paced action and features some of the liveliest battlefields seen in online gaming. Most important of all is that it is immense fun, and absolutely ranks as one of the best online PlayStation 3 experiences yet available.

Operation: Omega Dawn at first appears like a rather insubstantial expansion to the game world. Essentially you get a new map and a new vehicle, but delving somewhat deeper reveals that these well considered additions bring a whole new lease of life to a game that still has plenty of mileage of its own to expend.

The new map, Omega Factory, is a vast and towering level, featuring plenty of raised platforms that make for some excellent gameplay, having been designed with the new KT-424 Combat Dropship in mind, which we’ll get onto shortly. The new map, set at night time, has several vast factory buildings that reach into the sky, includes six battlefield layouts and encourages slightly more on-foot fighting than the game’s previous combat zones, though you’ll still find yourself spending plenty of time in the air unleashing hell on the enemy below and around you.

While the new level is expansive and filled with nice design touches such as some excellent hidden rooftop areas, it is the Dropship that really steals the limelight in the Omega Dawn expansion. Described by developers Incognito as something of a ‘multiplayer boss’, the huge new vehicle is essentially a transporter and battle station combined that can be used on land or in the heavens, allowing for all kinds of new strategies and tactics.

Capable of carrying up to seven troops and land vehicles at once, its most basic function is as a vessel to pilot into a strategic position before unloading all of its passengers and hardware for a combined attack on the enemy. Unlike Warhawk’s previous passenger vehicles, those sitting away from the pilot’s seat can fire hugely powerful MBEC-3 Heavy Support Canons, meaning taking down or even approaching a Dropship is very hard work indeed.

However, the KT-424 does have a weak spot in its armour, meaning a skilled pilot of a standard lone Warhawk plane can fell the massive behemoth with a few well placed shots. There are other limitations on the enormous vehicle in place to assure that it isn’t too all-powerful, and to prevent games descending into nothing but Dropship attacks. The vehicle respawns incredibly slowly, and coordinating your clan to make their way towards and onto the ship simultaneously is some undertaking. Still, once in a while you are treated to a Dropship-on-Dropship stand off, and the carnage unleashed is quite staggering.

Additionally, flag carrying characters cannot leap straight onto the Dropship, but must be picked up. This may sound like an incidental rule, but a particularly skilled Warhawk pilot should be able to pluck a flag-carrying troop from a vehicle or land mass and drop them from a safe height back at their base. Toying with this technique, it’s easy to see that soon they’ll be all kinds of clever stunts as players intercept falling flag carriers in a myriad of ways.

Some truly thrilling battles take place around the Dropship points, as teams try to prepare for the perfect moment to board one of the new vehicles, and subtle alterations to the largest five original Warhawk layouts have been made to allow for spawning points for the hulking new transporter.

The new ship and the new map look fantastic, and Omega Factory does seem to be slightly better graphically than the previous levels. It combines sleek futurist lines with an antique style that evokes a feel for ancient civilizations long ago redundant. Other than that everything here will be familiar. The same irresistible gameplay keeps you coming back for more, and the intensity of the action never fails to excite and challenge. If anything proves that the PlayStation 3 will one day rival the might of the 360’s online services, it is Warhawk and this brilliant Omega Dawn expansion.

If anything proves that the PlayStation3 will one day rival the might of the 360's online services, it is Warhawk and this brilliant Omega Dawn expansion.
8 Features perhaps the best Warhawk map yet An amazing new vehicle to put Halo to shame An incredible price for such an expansion Another map would have been nice