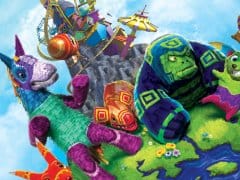 As much as we were hugely looking forward to Rare’s Viva Piñata follow-up, Trouble in Paradise, there was always the feeling that the dev team would struggle to make a true sequel. Although the original game had a few problems, the core idea and gameplay was near-perfect, making for one of the Xbox 360’s best games. Being a sim, Rare couldn’t simply build some new levels and a few new enemies and have a sequel. The whole premise of Viva Piñata is the garden, which is where piñatas live, where you plant seeds, grow plants and decorate. This was never going to be Viva Piñata: Piñatas invade New York City, and as such is going to feel extremely familiar to anyone who sunk considerable time into the original. That’s not to say that Rare hasn’t managed to make this another must-own title.

The sense of deja vu is impossible to shake. Once again you start with a simple spade, a watering can and some grass seed. These are your primary tools for landscaping your garden into a piñata paradise – a garden that starts off looking just a small step above what you might expect to find should you return home after a trip around the world. It’s not pretty and isn’t attracting many visitors. Your goal, as in the original, is to spruce up the garden and attract as many different piñata species as possible. This all starts with the humble worm, or in piñata land, the whirlm.

All piñatas in Trouble in Paradise have certain garden requirements before they’ll appear, visit and become residents. Whirlms are the most basic example, but the same principles apply across the board, albeit at a much more complicated level. Whirlms need dirt, so as long as you’ve got 10 square pinometers of soil or grass in your garden they’ll turn up. Luckily the requirement for a visit and residency is exactly the same, so it won’t take long for a whole load of whirlms to turn up. The final requirements are for romancing. These need to be met before your piñatas do a little dance and start breeding. All piñatas need a house to romance in, but usually also a bunch of other requirements, from the type of objects in the garden to the food they’ve eaten. Whirlms of course are simple creatures, so just need a house and dirt. If only everyone was so easy to please.

A whirlm population will bring in new visitors, and from here you start the whole pleasing-process again, shaping your garden to their needs while also trying not to upset your existing residents. Depending on what you’re trying to attract you’ll need to dig ponds, lay new surfaces (grass, long grass, sand and snow are all options eventually), grow certain plants or plant bushes and trees for fruit. Once you start you’re in a state of constant upkeep and renovation, digging, planting and watering non-stop.

You’re not entirely alone in your quest to become the ultimate gardener, with a whole host of helpers (many familiar faces from the original game) cropping up as you progress. Achieving new things in the game awards you with petals, with a certain amount of petals earning you a level upgrade. Level upgrades earn you new items available to buy from the store, new helpers to hire, new seeds to plant, new equipment to buy and loads of other stuff . You can even buy accessories and toys for your loveable piñata friends – who doesn’t want to see a Lickatoad in a bowler hat?

By the time you’ve been awarded a larger garden size (a second increase comes later in the game) you’ll need all the help you can get. Eventually you can hire help for just about all the tasks you need to do in order to keep your garden in good working order, from a woman who collects fruit and sells it on, to garden guardians who are meant to prevent nasties from causing trouble while you’re not looking. As you’ll come to learn, these helpers have a mixed rate of success.

The nasties come in the shape of red enemies known as sours and ruffians. Sours are evil piñatas full of bad candy – candy which is harmful to other piñatas if eaten. You’ll have to batter them with your spade and break up all dropped candy as quickly as possible in order to prevent a visit from the doctor. With money earned through selling unwanted piñatas and garden produce you can block various sours from entering, which makes your life a lot easier. Ruffians, and bigger baddies Dastardos and Professor Pester are another matter entirely. These guys are immune to your shovel attacks and cause far more trouble. If you get to them in time they can be bribed at a high cost or you can buy a fairly costly decoy piñata, but usually once they appear it’s best to expect the worst.

Professor Pester will be familiar to fans of the original game and here he seems to appear more regularly, taking out your most valuable piñata in one wickedly cruel blow. Until later on in the game you don’t have much in the way of defence, making for a rather annoying period of play where your most cherished piñatas (we swore we wouldn’t become attached and name them all, but it’s hard not to when the game rewards such actions) are repeatedly taken from you – we’ll never forget you Lickyman, with your bright orange afro shining bright in our memories forever.

To add a little more focus to proceedings you can accept challenges from Langston, a Lickatoad whose job it is to round up piñatas for parties around the world. You’ll be asked to round up one or more of a certain piñata type and pack them into a crate for delivery to a party somewhere. It’s not as easy as packing them up though, as you’ll need to make sure their Candiosity meter is full (their happiness) before Langston will accept them. These challenges not only encourage you to go after new species but also reward you with petals which help towards your overall goal of levelling up.

Since pretty much all of the above can apply to the original game, what exactly has changed in this sequel? The short answer is nothing massive, but lots of little things. One of the most important is the more streamlined interface, which makes access to tools, piñatas and seeds so much quicker. Newcomers will find a well designed control system that utilizes the 360 controller extremely well, while veterans will instantly appreciate the improvements that have been made.

Two new environments have been included too: Dessert Desert and Piñarctic. You don’t have nearly the same level of interaction here as you do in your own garden, instead taking on a hunter approach. Langston also sells traps (of varying quality and price), which you need to place on the ground and bait with enticing items. Other than making sure you’ve bought the best trap you can and placed the correct item on the trap, you’re pretty much a spectator in these areas, but you can’t help but get engrossed. We sat in the Piñarctic for a good 30 minutes watching as a giant piñata sniffed around an orange we’d placed on a trap. We could do nothing but watch, making it more of a wildlife documentary than a game, yet when it finally walked on to the trap there was a unanimous shout of joy in the room. Of course, when the beast smashed free of its trap there was a collective sigh, but it’s all part of the game. Damn you and your cheap traps Langston!

Also new is support for the Xbox LIVE vision camera, allowing you to scan cards and add new piñatas to your game – a process we found to be rather hit and miss. A ‘just for fun’ mode essentially allows you to play with unlimited cash and access to all the game’s items and tools. Piñatas show requirements above their heads and nasty enemies don’t appear either, making it a less stressful game mode that will hold more appeal to gamers interested in seeing the creatures and less bothered about the deep management sim running in the background. The trick system (tapping piñatas with a stick when they perform a trick after eating a certain item) also seems largely tacked on, but it does provide another way to raise the value of your piñatas.

Of more appeal is the new co-op functionality. Two players can play a garden together on a single 360 and up to four can play together over Xbox LIVE. Sadly the online play ends up being nothing more than a rather high-tech show and tell, but the two-player single-system play serves as a great way to play with a friend or, better yet, a younger family member. As much as Viva Piñata: Trouble in Paradise has the appearance of a family game, it’s far too deep for novice gamers. Two-player support lets kids play without being overwhelmed by the complexities. The included mini-games feel like novelties, but they are another way to increase the value of your piñatas gain some achievement points (something that isn’t easy in Trouble in Paradise).

Trouble in Paradise will polarise people. You can’t get around the fact that it’s full of incredibly bright colours, insanely cute creatures, twee noises and almost child-like humour. If you’re reading this thinking you’re going to hate it and want to get back to blasting steroid-abusing muscle men with yet another overpowered machine gun from the future, then go right ahead – you need an open mind if you’re going to get the most out of the game. Allow yourself to enjoy the over-the-top sugar-coated sweetness of it all, and it’s hard to resist. There are some technical problems that we’d have liked to be fixed (reflection pop-in and some frame rate issues) but on the whole Trouble in Paradise delivers a much needed blast of colour to the Xbox 360 and next-gen gaming as a whole.

If you’re new to Viva Piñata you probably won’t expect to find the level of depth that’s on offer. On top of what we’ve already mentioned, you can add in the use of special fertilizer to grow new plants, a bouncer board that lets you block entry to certain piñatas, a tinkerer who can completely change items into new objects, variant piñatas, high-level piñatas with brilliant abilities, sharing piñatas with friends, a full-on ecosystem, a complex farming sim where you grow to sell and much much more. If you’re expecting a walk in the park, think again.

Rare’s original Viva Piñata proved that cute visuals and loveable creatures needn’t be packaged up in throwaway party games. Although this sequel could be labelled as Viva Piñata +, in that it more or less builds on the original rather than doing anything drastically different, it’s still an absolutely must-own Xbox 360 game. Once you’ve built a garden with a few piñatas living happily you’ll be hooked, with short sessions to check out how things are going quickly turning into mammoth all-day affairs where you simply can’t stop until you’ve managed to entice that smug new piñata into your garden after it’s spent a whole day wandering around the edge grinning like the village idiot. Buy Trouble in Paradise, name your piñatas after celebrities, friends and family members, dress them up like fashion disasters and realise you’re playing one of the best games of the year.

Buy Trouble in Paradise, name your piñatas after celebrities, friends and family members, dress them up like fashion disasters and realise you're playing one of the best games of the year.
9 Gorgeous visuals Highly addictive Incredible depth Very similar to previous game