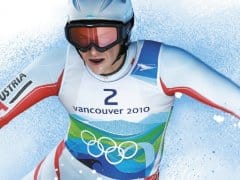 Everyone over a certain age loves a bit of virtual track and field. The simple button-mashing controls take us back to a time when games were a collection of poorly animated sprites with limbs moving faster than humanly possible. There was a sense of achievement when your fingers started to hurt and blister due to the excessive button mashing. The Olympic Winter Games has never really lend itself well to that style of gameplay, but that hasn’t stopped SEGA bringing out a title to coincide with the 2010 games in Vancouver. The problem is, without the immediate and gratifying finger-punishing gameplay, all that’s left is a collection of mundane and overly similar event recreations that do little to excite.

Based on the 14 events on offer in Vancouver 2010, snow and ice-based events are clearly harder to translate to simple video game fun than track and field events. You get four Alpine Skiing events, one for Ski Jumping, two for Freestyle Skiing, two Snowboarding, two Short Track Speed Skating, and one a piece for Bobsleigh, Skeleton and Luge. That isn’t a terribly large number, and once you’ve factored in that a lot of them play very similarly to others, you’re left with very little variety.

Downhill skiing and snowboarding events generally require you to tap a button to set off and then steer your skier while either holding down a button to speed up (by crouching slightly) or slow down (carving into the snow). The difficulty in passing through gates that mark out the course changes depending on the event type, and the Cross events require you to press a button to jump every now and again. It’s basic stuff. Ski Jumping is decent enough, but with some of the distance relying on a good tailwind, getting a top score isn’t always possible. This is of course part of the sport in real life, but in a video game it feels rather unfair.

Of all the events, the speed skating recreations are most comparable to traditional Track and Field events, although here you only ever need to hammer one button or press it in time with your movements, and steering is bizarrely handled by the triggers on the controller, and not the analogue stick. The award for most awkward to play goes to the Ladies Aerial event, in which you need to spin each of the two analogue sticks to keep coloured bars over a number of targets travelling around a circle. It feels as though you’re doing nothing at all related to performing tricks and will baffle anyone who can’t multi-task.

Then there’s the trio of Bobsleigh, Skeleton and Luge. These are essentially the same event in slightly different sets of clothing and the odd control variation. All three are dull to play. If you manage to build up some speed by banking up the corners just the right amount, the game portrays this fairly well, but there’s nothing remotely fun about it. That, in a nutshell is what’s wrong with Vancouver 2010. Even the official Olympic licence hasn’t been used very well, with the Olympic mode offering none of the flashy presentation of the proper event. Games like FIFA have shown what TV-style presentation can add to the sports genre, but Vancouver 2010 feels nothing like a TV broadcast.

Multiplayer should in theory have made the game more enjoyable, but the events here just don’t work that well. Whether played split-screen, system link or online, the game simply isn’t worth much of your time. The downhill Cross events work best, but that’s in comparison to some that just aren’t good at all in the company of friends: Ladies Aerial, we’re looking at you. Even the lure of beating your friends’ top scores, viewable on online leaderboards, isn’t enough to keep you playing beyond a few runs through each event.

Developer Eurocom has included a series of challenges to try outside of the practice and Olympic modes. These take the basic events and challenge you to complete them against certain criteria, such as the downhill slalom under a set time. In that case, the course has been littered with snowmen, each giving you a few seconds extra when hit. These will keep you occupied for a while, perhaps even longer than you’ll want to play the main game, but the core gameplay mechanics aren’t changed. We’d have preferred more events over these tweaked versions of an already limited selection of events. Where are curling, figure skating and biathlon?

The BBC has the rights to show coverage of the 2010 Winter Olympics in the UK and is advertising it with a brilliant animated short. This brief advert is more entertaining than the Vancouver 2010 video game. We’re all for multiplayer sports games that follow the Track and Field mould, but Vancouver 2010 offers none of the classic game’s gratifying gameplay. Stick to watching this year’s Winter Olympics on the TV.

We're all for multiplayer games that follow the Track and Field mould, but Vancouver 2010 offers none of the classic game's gratifying gameplay. Stick to watching this year's Winter Olympics on TV.
4 Looks decent Lots of popular events are missing Only 14 events No flair to the presentation

Vancouver 2010 – The Official Video Game of the Olympic Winter Games

The official video game of the Vancouver Winter Olympic Games.

Vancouver 2010 – The Official Video Game of the Olympic Winter Games

The official video game of the Vancouver Winter Olympic Games.