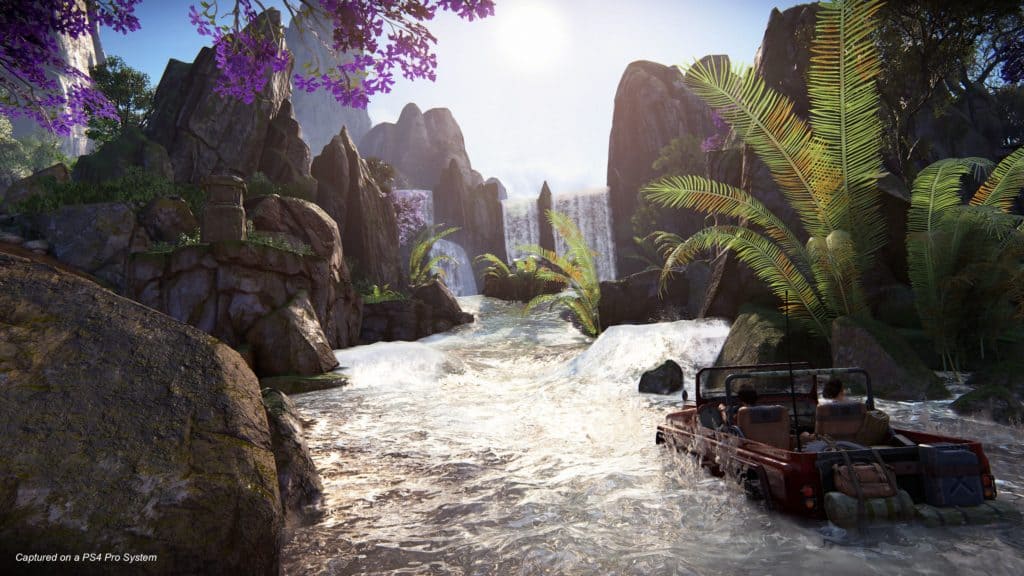 We live in a post-Nathan Drake world, where he’s retired from treasure hunting to apparently buy an entire Island. I’m okay with that, especially if it means a great character steps into being the main protagonist. Thus Chloe Frazer, first introduced in Uncharted 2, fulfills the role of jumping onto ledges that then crumble beneath her, and pulling down the doors of ancient archaeological wonders with a jeep.

It will probably come as no great surprise to anyone reading this that Uncharted: The Lost Legacy is, um, more Uncharted 4. I liked Uncharted 4, so that isn’t much of an issue for me, but it really is a microcosm of Uncharted 4, over about eight hours. It uses not only the same mechanics (the two people rollocking around in a jeep, the rope swinging, the piton climbing, the sliding around on your arse on muddy slopes into a rope swing into a piton climb, at which point Chloe goes ‘Woo! That was a close one!’, or similar) but also having approximately the same beats in the story (bad guy encounter, frantic running from gunfire, exploring open area, lost city, bad guy encounter where you’re outmatched, and so on and so forth).

This means it has all the bad things about Uncharted 4, including bullet sponge enemies and guards who sometimes default to not having a patrol route, some fussiness about when you should press jump in a platforming section for it to be deemed successful, and the game occasionally telling you what you need to do, but only triggering a cutscene when you do it exactly the way it wants. It’s caught between allowing open, free form exploration but still being linear.

But it has all the good things, too. The puzzles in the main story are perhaps a little tired for a game (one wonders why so many ancient civilisations locked things away with rotating circular jigsaws) but the optional ones are thoughtful and satisfying to solve. The stealth combat has been improved with the addition of silent weapons. The areas you explore are wonderfully realised, and are mostly a beautiful riot of colours, rather than being predominantly green as in the Uncharted 4 jungle.

This time the treasure is the fabled Tusk of Ganesha, the hunt for which takes you into the mountains of India and explores Hinduism and the associated mythology, and Chloe, an Indian-Australian, actually has an emotional connection to this particular treasure that’s revealed as you play. As with all Uncharted games, the truth is a mix of both the myth and the fact, though The Lost Legacy feels more grounded in reality, particularly with the bad guy. Asav isn’t looking for magic, he’s a war profiteer who seems to have developed a kind of religious mania about his own self-importance, which is a fantastic enemy for two women to take down together.

Because, of course, Chloe is not alone. She’s working with Nadine Ross, a secondary antagonist in Uncharted 4 turned supporting protagonist here, and the developing dynamic between the two is probably the best thing about the game. Chloe is the carefree treasure hunter and Nadine is the pragmatic mercenary, both loners deflecting their emotions in different ways and for different reasons, but eventually having deeper and more trusting conversations as the game progresses. They educate each other a little on their respective heritages and pasts. Their initial bonding is of course over how, what with both of them coming from male-dominated professions, it’s nice to be working with a woman (Nadine apparently broke a man’s legs when he asked to speak to ‘the man in charge’).

But here we come to a sticky wicket, because my biggest problem with the game is a spoiler. I’m going to talk about it in vague terms to give you an understanding of my experience, but I won’t go into explicit detail. If you want to avoid any spoilers whatsoever, however, then skip the next bit. I’ll put a screenshot in when we’re done. You’ll be safe again after the screenshot. Ready? Okay.

About two thirds of the way through, maybe a little more, a man is introduced and joins the team. It’s not that I don’t like him (I do, a lot, and if anything he deserves his own standalone rather than being an also-ran in someone else’s), but he’s near as dammit entirely superfluous. The story would run almost exactly the same without him, and he upsets the dynamic that I had previously enjoyed so much. You can tell, I think, what Naughty Dog was perhaps going for: he’s not unhelpful, but is unnecessary, and so you’re shown how the women don’t need a man, literally climbing over him to press forwards. But there’s another, easier way to have done that, isn’t there?

It’s a bit like if you went out to get mashed with some mates and one of them brought along their partner, and you like them and everything, and they didn’t do anything really, but you weren’t expecting them to be there and the evening was a bit weird as a result. I feel like I was promised a girl’s own adventure, and then I didn’t entirely get it. He either needed to be in it a lot more or a lot less, if he was going to be there at all.

The Lost Legacy is otherwise confident proof that Uncharted has life in it yet, capable of telling new stories with engaging characters, and ones who developed a natural, convincing and refreshing relationship as a result. If there is another Uncharted, though, it’s going to need to break out of it’s own formula a little. Nadine and Chloe can certainly help it do that, but they can do it alone, you know.