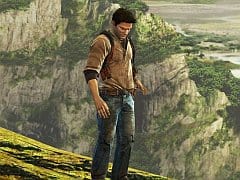 I wouldn’t blame anyone for approaching Uncharted: Golden Abyss (the second new Uncharted game in three months) with a touch of resistance, but fears of this handheld adventure being a straight-to-DVD sequel in comparison with the series’ PlayStation 3 blockbusters can be put to rest.

But it’s not all good news, as developer Bend Studio’s writers and directors can’t go pound-for-pound with Naughty Dog’s finest in this prequel title, and its treatment of Nathan Drake and his new (old) chums is a fragile emulation of the series’ former highs. In walking the hallowed jungles and mud paths of one of Sony’s most cherished franchises, the studio most famous for the characterless but mechanically sound Syphon Filter series ensure a cosy, safe but sadly unambitious stewardship for Drake’s first portable outing.

This is a tale designed by committee and checklist, and so Uncharted: Golden Abyss finds itself in a handful of exotic Central American locales (check), matches Drake with a new smart-talking love interest to banter with and rescue from peril (check). Then there’s a touch of double-crossing, a nefarious warlord after an ancient city of gold, and about 6-8 hours of the series’ well-worn formula of action, traversal and some very gentle puzzling (check check check).

So far, so Uncharted. For a series that trades almost entirely in big-budget spectacle, Golden Abyss’ downsizing remains impressive, even if it cannot compete with the more elaborate set-pieces of Uncharted 2 and 3. Drake gets to shoot, shimmy and dangle his way across some suitably exotic rainforests and mountain ranges, and the game makes good use of rocky chasms and burning buildings. Your world still crumbles in Golden Abyss, then, but in smaller pieces and much less often. Framerate is occasionally sacrificed to benefit the game’s impressive fidelity, too, and in spots the system simply cannot keep up with the more hectic firefights.

As Sony’s jewel of the PlayStation Vita launch line-up, Bend Studio has used the system’s various doohickies and wotsits (perhaps under duress from suited executives) to crowbar in a variety of touch and gyro features. You’ll be tapping to pick up treasure and weapons, swiping to clear dense overgrowth with a machete, and rubbing the screen to clean dirty objects. The latter would be the most unnecessary and unwanted addition to Golden Abyss were it not for the maddening abundance of puzzles requiring you to reassemble torn documents by spinning and placing them on a grid, a drab exercise that makes you wish the villains had just made use of a paper shredder.

Even the more fundamental parts of the game can be played with the Vita’s new input methods, allowing you to climb by drawing a line across the screen, engage in melee combat, or aim with the gyro rather than the right stick. Traditional methods of control still exist – the Vita’s second analogue stick is one of its biggest back-of-the-box selling points, after all – meaning those used to playing with two circular blobs and a few buttons will be right at home, but the ease and accuracy of readjusting a sniper crosshair with tactile movement should silence even the most vocal sceptics of motion controls.

Studio Bend has also gone to considerable effort to pad out the periphery of the Uncharted formula, with Drake’s journal transforming from a gentle hints repository for some of the game’s puzzles into a fully-fledged almanac of baubles, backstory and trinkets. Alongside a returning bevy of shiny treasures to find – now bucketed into various categories – there is also an abundance of turquoise to gather; so much so that even Nolan North sounds wearied when reading his various lines for picking up lumps of the stuff.

Drake even finds himself taking on the role of an exotic tourist, using an in-game camera to snap a few Kodak moments in choice spots. Then there’s the Black Market metagame, which allows you to use Near to trade and exchange items with friends, building up a catalogue of tarot cards, Spanish gold and a general cache of shiny gubbins. Whether you’ll actually want to is another question, as the density of collectibles in Uncharted: Golden Abyss is overwhelming to a fault.

These myriad collectibles are designed to flesh out the game’s backstory, yet Golden Abyss is often at its worst when attempting to school the player with its overwrought mix of tawdry exposition and pointless chatter. While the script has touching character moments, much of the tale lacks the punch of Drake’s previous efforts, and the game’s signature villain lacks the psychotic menace of Lazarevic or the sinister edge of Marlowe.

The underwhelming narrative is a real shame, as without the budget, supporting cast or the raw processing power, Studio Bend’s gambit should have been on intelligent writing and canny storytelling, two areas unhindered by memory and technical specifications. While Drake is still one of gaming’s most likable characters, with more personality in his half-tucked shirt than the entirety of most action games, the rest of Golden Abyss’ half-realised world is depressingly forgettable.

The mistake, then, was for Studio Bend to blindly chase Naughty Dog’s focus on technical whizz-bang from an inferior position, a situation that would be like a handcuffed Michael Cera attempting to go ten rounds with Wladimir Klitschko. Even at its best, Golden Abyss is considerably behind the strong character work gained from Uncharted 2’s Tibetan mountains or the lavish visual feast of Uncharted 3’s capsizing ship sequence.

Yet Uncharted: Golden Abyss is a fine ambassador for the PlayStation Vita’s impressive capabilities, and Studio Bend’s heavy focus on coating its brief adventure with details and variety means there’s plenty to see and do in this pint-sized adventure. This is an enjoyable game, and Studio Bend has proved itself capable of competently shepherding Sony’s trusted franchises, but its limited spectacle and lacking script also make it the worst entry in the Uncharted series since the original Drake’s Fortune.

Golden Abyss' limited spectacle and lacking script make it the worst entry in the Uncharted series since the original Drake's Fortune.
7 Drake is still charming Impressive handheld game Weak script Too many collectibles