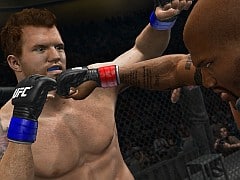 Do you know what it actually feels like to take a Muay Thai roundhouse to the leg? If you’ve never felt the thud of shin bone on prone quadriceps then it might appear a fairly tame way to attack another human being. It isn’t. Once you’ve felt that splitting of muscle and savage aggravating of nerve, sending emergency signals firing through your entire body from the tips of your toes to the lenses of your eyeballs, your whole perception of hand-to-hand combat changes forever.

I’ve just come fresh from rendering Urijah Faber’s leg to mincemeat with the human baseball bat Jose Aldo in UFC: Undisputed 3, and the addition of leg kick TKOs is just one example of this latest iteration getting the little things right. The MMA obsessed will purr over nerdy minutiae like the new seated cage position, or the ability to take an opponent’s back while you’re both still standing, while hardcore UFC nuts will cheer at every one of Jon Jones’ spinning elbows or the sight of GSP’s powerful double-leg. THQ and Yuke’s have managed to include all the little details and personality ticks you want to see from the Ultimate Fighting Championship’s most famous stars, and tuck them into their most complete, balanced and sturdy engine yet. This game sees the Forrest and the trees, if you will.

There’s no point splitting hairs (or should that be eyebrows?) over the fact Undisputed 3 is for the fans. If you’re after some rock ’em sock ’em head-smashing action, or the thought of two men tangled in a warm embrace on a sweaty mat turns your stomach, this really isn’t the game for you. Undisputed 3 is for people who’ll get excited by improved counter-punching, which sees jabs and straights now halting more powerful attacks mid-animation, so you can truly box off the back foot and frustrate your haymaker-hurling opponent. This is for the Tapout-clad Underground-lurking fanboys who know their Josh Rosenthals from their Josh Koschecks and their AKAs from their ATTs.

The in-cage (or in-ring if you’re playing the new PRIDE mode) action is still a little stilted and robotic compared to the sublime fluidity of EA’s MMA, but there’s so much depth to the brawling. Every position, from standing to clinch to ground, and everything between, has been lavished with detail – there are so many ways to transition from one facet of MMA to the next. Case in point: takedowns. The old UFC games let you shoot for a double leg before both players twiddled with the right stick until either the takedown was completed, or it was stuffed. It was a fairly competent system, but one sorely lacking in subtlety.

That system is still there, but now takedowns can be charged into the cage and completed using a throw, they can be sprawled out of (leaving the aggressor in danger), they can be shrugged off completely, or they can dive under a strong strike and lift a fighter clean off his heels. Mercifully, there’s no unstoppable Machida takedown this year either; as clear a demonstration as any that a game like this needed more than the 10-month development cycle UFC 2010 struggled through.

This depth and meticulous balance seeps into every area of UFC Undisputed 3 like warm salty sanguine to the eyes. Where there’s an attack, there’s a counter. This is particularly prevalent in the new submission system. Not only can you now block an incoming submission attempt (vitally), the new mini-game gives a clear indication of who’s winning the battle and why. An octagon appears on screen with two coloured outlines, one for each player, and the aggressor needs to keep his coloured outline over the defender’s until he gets the tapout, while the other guy just needs to keep away. It’s not as elegant as EA MMA’s dual submission meters, but it’s a damn sight better than mashing your pad into a fine powder with the ‘shine’ method from the last two games. And importantly, it’s now perfectly feasible to submit the CPU on any difficulty.

All this talk of mechanics and meters gets away from the real joy of UFC Undisputed 3, though. This, like the sport it represents, is a game of great moments, the type that brings a room of bloodthirsty men to a fevered roar when someone lands a thunderous headkick or recovers from near-death adversity. More so than any MMA game yet, UFC Undisputed 3 captures the thrill of catching your opponent clean, knocking him down then swarming for the kill, pounding away until the ref yanks you off or your foe somehow regains his senses and – crucially – his guard. It’s the most exciting thing about the sport – or any sport for that matter – and Yuke’s has captured it brilliantly.

Unfortunately, this new high standard doesn’t quite make it out of the Octagon door and into the gym. The new career mode is much improved over UFC 2010, with no stat degradation, little time in between matches and even some perfectly fine video packages popping up at key moments, but it’s still very dry, entirely formulaic and devoid of any real drama. Expecting the narrative of something like Fight Night Champion is perhaps too much, but there’s surely a nice middle ground to be found for future efforts.

Beyond that, the laddered Title mode returns, for what it’s worth, as do the once-excellent but now almost-entirely-DLC Ultimate Fights. Charging for what was one of the series’ trademark modes is pretty ugly. Thankfully, then, the PRIDE mode fills out the package with more weight than Bob Sapp in a McDonalds. Yuke’s and THQ have really gone to town, and that town is Saitama Japan, home of the enormous Saitama Super Arena and the now-defunct glory days of Japanese uber-league PRIDE.

Not only do we have the famous white ring and the headkicks-on-the-ground ruleset, we’ve got Bas Rutten on commentary, Lene Hardt screeching the ring announcements, giant trophies and PRIDE music when you win… even the lighting model is different. It’s such a glorious love letter to the long-dead promotion that it makes up for all the wonky single-player modes and money-grabbing DLC.

Rounding off the package is the online, which has always been the series’ downfall. At the moment, it’s smoother than 2010’s equivalent but still plagued by heavy input lag. Hopefully when the game hits stores things will shore up, and the game’s pre-release Alpha test will pay off in the long run.

Ultimately, though, UFC Undisputed 3 is still a game that’s best enjoyed with likeminded fight fans, on the same couch and with the same competitive spirit. There’s still room for the perfect MMA game, one that’s more organic, more convincing and probably even more violent, but for now, just strap those gloves on and enjoy the madness.