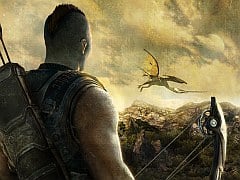 As far as aging franchises go, Turok is right up there. Having started out on the Nintendo 64, Turok’s early games proved to be popular with critics and gamers, in no small part for the then rather spectacular graphics. But things went wrong. After Turok 2 the games seemed to get progressively worse, with the last game, Turok Evolution, pretty much nailing the coffin shut. It was Touchstone who saw the series still had potential, grabbing the licence and setting Propaganda Games to work on a new Unreal Engine 3 powered FPS. While certainly better than Evolution, Turok’s latest dinosaur hunting adventure still leaves a lot to be desired.

You once again play as Turok, a Native American who happens to be part of an elite squad of soldiers. Your space ship crash lands on a jungle-like planet and from then on it’s time to blast some dinosaurs. In between all the shooting you’ll get some flashbacks to events from Turok’s training and a previous mission that resulted in a death of a soldier – something Turok is blamed for. It’s all action movie macho stuff, but serves its purpose.

So what follows is a by the numbers FPS, with you fighting against human soldiers and a load of rampaging dinosaurs. The key point is that these dinosaurs have no alliegence – they’re just trying to survive – so they’ll attack everyone. You can be fighting some soldiers, only to disturb a nest and all hell will break loose, with the prehistoric beasts ripping friends and foes to bits (not that you see that level of gore). This is a neat idea and one that on occasion does impress, but it’s sadly encased in a game so annoyingly designed that any good points are soon washed away beneath a sea of problems.

Let’s take a look at the controls first. Turok plays like any other FPS, so that’s fine. The problem comes from the number of fast moving dinos and the frequently large groups of soldiers. Without any aiming assist and some very twitchy analogue stick controls it takes an awfully long time to get to grips with things. Even after a number of hours you’ll still struggle to take down the fast moving beasts, and the long grass doesn’t do you any favours either – despite it looking rather nice. A little more assistance in the targeting would have been great, even if it was limited to attacking dinosaurs.

As with most modern action games, a health bar is nowhere to be seen, with the game instead doing the usual trick of making the screen turn red. Again, that’s fine, but what isn’t fine is the insane amount of blur applied to the screen as you near your end. It’s hard enough having to fend off a pack of dinos and some ridiculously powerful and accurate soldiers, and making you blind doesn’t help. You can of course run for cover (although your movement speed is far too slow) to recover your health, but you’ll rarely make it if you’re surrounded. It’s as if developer Propaganda Games wanted to intentionally damage its own game.

And there’s more. Turok is more than a little nifty with his knife, so he can kill most small to medium dinosaurs with instant kills. You’ll find that this move comes in incredibly handy as it saves you from spinning around wildly trying to target dinos with your guns, but it too is severely flawed. You can only perform these instant kills when the on-screen button command appears, but it seems to appear when you don’t expect it to and once you’ve started a knife attack the animation has to play out before you can attempt another. So, while you’re stood there knifing thin-air, the bloodthirsty dinos can feast on your flesh. When you are taken down by a dinosaur you’re presented with a button mashing event to save your life and, although they do grate after a while, these manage to convey the feeling of a struggle very well indeed.

Being knocked down is something few games actually do, especially first-person shooters, and it feels good at first. If a dino rams you or a grenade explodes near you, you’re going over. Viewed from a first-person perspective it’s incredibly immersive and at first a great feature. But at times it’s the most annoying feature in the game. One fight later in the game sees you go up against a walking tank (essentially a smaller version of Halo’s Scarabs) that repeatedly fires at you, knocking you down. Its fire rate is such that by the time you’ve scrambled to your feet it’s fired another round at you, and you’re on your arse again. Repeat this until you manage to edge out of range and you can imagine the frustration. It works as it should, disorienting you, but it doesn’t work as a gameplay mechanic.

So, that’s the aiming, the screen blur, knife attacks and knock downs – four things that combine to really damage a solid game – but there’s another, even more damaging flaw: the checkpoint system. It still baffles me how game designers can’t implement fair checkpoints and how game after game we’re forced to play through the same sections over and over again just because one section towards the end proves to be difficult. Turok has these in spades. Early on you’re forced to replay a complete elevator section (including a part where you get off to shoot out an electrical hatch operation console) over and over again unless you make it to the top without dying. Even on standard Normal difficulty this is hard, but on anything trickier it’s infuriating. And these moments keep on appearing throughout the game.

What’s sad is how good Turok could have been. The environments are large and allow for a range of approaches, the dinosaur-on-man action is excellent and the range of weapons on offer is pretty good (although not nearly as impressive as Turok games of old). Despite its problems it’s still an exciting game to play, often invoking memories of classic PC FPS Alien VS Predator, with the rushing dinosaurs and swaying grass making for some truly heart stopping moments. While the storyline relies on there being other humans on the planet, had the game been simply about your squad surviving against dinosaurs the end result could have been far better.

There are genuinely great moments, like your first fight with a big dino in an arena-like area. Moments like this make you think the game is going to improve from then on, but it just doesn’t. You’ll encounter the above problems over and over again, and so much darkness that you’ll laugh when one of your team mates states quite seriously that “It’s starting to get dark”. The fact that you’ve been fighting through dinos in near pitch black lighting for the past 15 minutes seems to have passed him by.

Multiplayer game modes are of course included, with up to 16 players able to take part in competitive matches for solo and team play. What’s on offer is solid, but the fiddly aiming and some considerable lag make Turok’s online modes something you’re unlikely to play all that often. The co-op missions carry the most enjoyment, offering you unique levels not found in the single-player campaign. While the gameplay isn’t suddenly transformed during these levels, playing with three other real players does elevate a few of the problems, simply because you’re able to tackle groups of enemies more successfully.

Built on the Unreal Engine 3 you’d expect Turok to look great, and it does… in parts. When you’re looking out over a large landscape, the light hitting the trees beautifully and dinosaurs running amok in the valley below, it’s a great looking game. Other than the odd moment where the dinos animate a little strangely the beasts look great too, but too much of the game is bland. All the indoor sections are awfully generic and at times the lighting is so subdued it’s almost impossible to see what’s going on. Still, seeing all the sights is one of the main reasons to play through the game, and it’s only really some fairly regular slowdown mars the overall presentation. Audio work is a bit patchy, with some excellent surround sound but not so great voice work.

So, Turok isn’t an awful game, it’s just an unbelievably frustrating one. Try as I might to like it, the game almost insisted that I didn’t. Every good moment is countered by at least a handful of near soul destroying problems and every stunning piece of scenery is blighted by too much darkness and an erratic frame rate. A selection of solid multiplayer game modes aren’t enough to make up for a poorly put together game, relegating the latest Turok to a league it simply shouldn’t have found itself in. It’s definitely better than Evolution, but as reinventions go we wanted a whole lot more.

Turok isn't an awful game, it's just an unbelievably frustrating one. It's definitely better than Evolution, but as reinventions go we wanted a whole lot more.
5 Some impressive visuals Twitchy controls Dreadful checkpoint placement Knockdowns are annoying

Turok is an epic, story-driven first-person shooter set on a dark, mysterious…

Turok is an epic, story-driven first-person shooter set on a dark, mysterious…