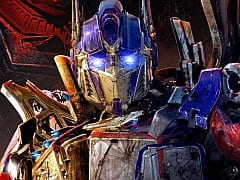 Transformers: Revenge of the Fallen Review

I’ve yet to see the latest Transormers movie, having had my hopes dashed by friends claiming it’s a huge disappointment. As a life-long fan of the original cartoon and comics the first big-budget Michael Bay movie managed to tick most of the right boxes, but the game failed on almost every count. Activision claimed to be righting many of the wrongs found in the 2007 game, so my hopes were raised. Could Revenge of the Fallen actually be pretty good? Would playing as Optimus Prime bring a dash of childish nostalgia and have me grinning from ear to ear? I probably shouldn’t have been so optimistic.

Revenge of the Fallen isn’t a terrible video game, let’s make that clear from the start. It’s certainly better than the last one, which was terrible on anyone’s scale, but it’s still some way off greatness. The plot, I’m told, follows the movie’s storyline, with the All Spark once again being key to which side comes out victorious as the Decepticons try to destroy humanity and the Autobots attempt to save everyone. Megatron, having been sunk to the bottom of the ocean at the end of the first film, is being guarded by a fleet of Navy carriers, but you might be able to guess what happens.

Storytelling isn’t a highlight of the Michael Bay movies and it’s even less so in this game. Trying to figure out what’s going on through the odd mission description isn’t easy and you’ll likely get to the end feeling slightly confused. This isn’t a complete disaster of course, with the robot action being the most important ingredient, but this too doesn’t deliver the goods as well as I’d hoped.

Taking control of massive transforming robots should be cool. Games like MechAssault were excellent, and those were plain old mechs with humans piloting them, so proper bots that can turn into cars, trucks, planes and helicopters should be a thing of beauty. The problem developer LuxoFlux clearly had is how to make a game that made the most of each form. On one hand you need a solid third-person walking robot game, and on the other you need to be able to scream around environments on four wheels or in the air. This was a task that seemingly proved too difficult to pull off.

As a bi-pedal robot you can stomp around, jump pretty high, climb buildings, fire off guns and activate special abilities unique to each bot. This works well enough, although the missions rarely throw up many surprises, with the majority of your time spent simply blasting a set number of enemies, escorting vehicles, ferrying around Sam or Mikaela (Shia LaBeouf and Megan Fox) or rescuing stranded soldiers. All of these tasks are joined by a few optional objectives (giving you more Energon for upgrades) and timed for various badges that earn you points. Points are needed to unlock new missions and areas, but it’s not too hard to gather enough to progress.

Had the vehicle gameplay been integrated superbly into the on-foot combat the whole thing would have been elevated, but it’s sadly far too awkward for its own good. Rather than having a button that switches between the two forms, transformation takes place as soon as you press the right trigger. As this is also the accelerator, you’re always moving forward, which is as troublesome as it sounds. You can brake, but there’s no reverse and as soon as you let go of the accelerator you transform back into standard walking mode.

It’s a control system that simply defies sense at times, which is a shame as some of the moves you can pull off while transforming from vehicle to walking robot are pretty cool. These come with their own issues though, with you having to hold down a button and then release the trigger while keeping the other button held down – something that takes a little getting used to. When you pull them off you can perform massive leaps into the air, devastating ground pounds and powerful melee attacks. These advanced takedowns are always hugely satisfying to pull off, but they don’t make up for the general awkwardness of the controls and combat.

None of the game’s missions will take you all that long to complete, so you’ll have seen both campaigns in less than a day. There is some online multiplayer to keep you going, though it’s not genre defining stuff. As well as normal deathmatch and team deathmatch, there’s a take on capture the flag, a mode that sees teams trying to take control of points on the map, and a defend/kill the leader mode. With a max player count of eight (four per side), it’s hardly a full-on Transformer war, but it’s enjoyable enough.

After the hugely disappointing game of the 2007 film, Revenge of the Fallen looks somewhat beautiful by comparison, but it’s far from the complete package. Bot models are the most impressive part of the presentation, being incredibly detailed, but the rest of the game looks bland and lifeless. Levels are sparsely populated, the draw distance on offer isn’t great and the effects aren’t exactly spectacular. Some environments certainly look better than others (the Shanghai levels are incredibly dull), and the voice acting is decent if a bit too cheesy at points, but on the whole this isn’t really good enough for a next generation product.

Fans of the movie are likely to find something to enjoy here, but outside of the fact that this is a movie license it’s hard to find much to heap praise on. The controls and lacklustre level design are the biggest problems you’ll have to overcome in order to enjoy Revenge of the Fallen. If you can manage that you’ll find a enjoyable, if rather basic shooter. If you’re not a mega fan you’re probably better off giving this a miss.

Fans of the movie are likely to find something to enjoy here, but outside of the fact that this is a movie license it's hard to find much to heap praise on.
5 Impressive bot models Advanced takedowns are cool Controls are awkward Bland environments

Transformers: Revenge of the Fallen

Transformers: Revenge of the Fallen