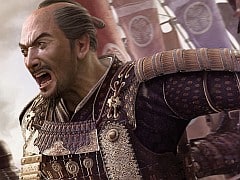 On paper, Shogun 2: Fall of the Samurai reads like the ramblings of an eight year old after his first history lesson, hand stretched tentatively up into the air in class to ask who would win in a fight between a rifleman and a samurai. Before being laughed at by his classmates. Silly child: history has no time machines.

But, evidently, it does have a few time capsules. Feudal Japan was still pretty feudal in the early 1800s, while the British and the French were gallivanting around the globe with steamboats and smooth-bore rifles, and it wasn’t until 1842 that the Japanese even allowed Western ships near their borders. But after the West was allowed to dock, Japan went from sword-wielding warriors to regimented platoons of rifle-bearing troops in half a century.

It’s not only about the weapons, but also the massive changes to infrastructure that went on during the period. The introduction of railways cut travel times by a previously inconceivable degree, and the assembly line and factories turned Japanese production into a powerhouse. The entire face of the country was altered in a startlingly short time. About as short a time as the typical game of Total War, in fact.

That’s not the only convenience of this setting for Creative Assembly. With Empire: Total War already under their belt, they have the knowledge of how to make line infantry work, and the assets in place to bring them over wholesale. Fall of the Samurai even counters the main complaint that people had with Empire: that it was far too big and unwieldy. Instead of the known world, now we have Japan. It’s a vastly smaller, more intricate playing field, but it’s also one that scales excellently with the game’s engine.

None of this is wildly evolving the well-established Total War formula, though. You still build your forces, aggressively expand into neighbouring territories, and then build the infrastructure and economy to fund bigger, better forces. Diplomacy is still a simple affair, with trade agreements and military alliances, and you still dispatch agents to assassinate, sabotage and coerce. Which is fine; no one expects an expansion to rewrite the book. But Fall of the Samurai does rewrite a few chapters.

There’s a wonderful sense of imbalance to the whole expansion (which is its own separate install, and playable without the main game), with cannons tearing apart castles that were clearly not meant to withstand cannon fire. The riflemen rip the melee troops to shreds, and the mounted units don’t seem to have a response to getting a wall of hot lead blasted in their direction. The economical buildings, too, are all vastly superior if you choose to adopt the Western styles, generating more money for you, and better units and benefits for your people.

All of these are not without cost, however. Each modern building you construct or technology you research adds modernisation to your clan, which makes your people unhappy. Change is never welcome, and when you’re dealing with change of this magnitude it breeds a particularly potent resentment. For every shiny new gun, you’ve got another grumbling traditionalist sowing dissent in your Teahouse.

Some buildings, such as Dojos and Inns, lower modernisation, meaning you’re in a constant balancing act between what you want to build to strengthen your position, and what shiny new technology you could get if you carry on levelling up your Clan Development, which is fed by modernisation and unlocks more advanced technologies to be researched.

The expansion is focused around the Boshin conflict, a civil war that occurred between 1868 and 1869, fought between the Shogunite and the Imperial forces. The Imperials wanted the foreigners cast out of Japan, and the Shogunite considered a future with the world involved would lead to a stronger Japan. Oddly, it was the Imperials who were more technologically advanced at the time, with the Shogunite leaning stronger on traditional values.

Which makes it a shame that none of those ideologies are reflected in the game itself. The modernisation mechanic is the same for both, and both can quite happily create international trading ports that welcome the French, British or Americans into Japan. Instead it becomes a war based purely on geology, and while it does build into an exciting climax where, by the end of that seventh decade, you’re forced to pick a side, and engage in all out war against the other.

The other problem is that somehow, despite the incredibly volatile period and the vast ambition of merging such diametrically opposed technologies and peoples, Fall of the Samurai feels safe. Creative Assembly can do line infantry. They can do trading ports. Empire worked, on the small scale, and Japan is a much smaller scale than almost anything Empire attempted. The few genuinely new mechanics that Fall of the Samurai introduces, especially railways, feel clumsy. In theory trains should be the perfect troop transports, zipping your men from one end of your territory to the other, but in reality if you don’t have a perfectly connected rail system, you can’t go anywhere. And when you can’t dictate where those railway stations are, it gets a little frustrating.

The same problems that plagued Shogun 2 are present here, too, with insufferable load times, wonky pathfinding and an ever so slightly idiotic AI on the campaign map. This is all a roundabout way of saying that if you were happy to put up with those issues in Shogun 2, there’s no reason that they should annoy you here. Shogun 2 was a massive, beautiful game, and Fall of the Samurai is that same massive, beautiful game, except now it’s got guns and trains, and a much stronger theme that plays into the mechanics.

So it’s not hard to ignore those niggles, especially when you’ve got an excitable eight year old in your head jumping around and making gun noises as he pretends to swing a sword about. There’s a magic in that weird juxtaposition of old and new. You want to know who would win, because while there’s an awesome power in the barrel of a gun, there’s a romanticised grandeur to the blade of a sword. And you know who won, because our policemen don’t walk around with katanas strapped to their backs.

There's a magic in Fall of the Samurai's weird juxtaposition of old and new.
8 No Tom Cruise Guns and swords Loading times Railways are a bit rubbish

A standalone expansion for Shogun 2 set in 1863.

A standalone expansion for Shogun 2 set in 1863.