It’s nice to see Tony Hawk again. His image was in need of renovation. The last we saw him, in Pro Skater 5, he spent most of the time on the floor. In fact, he spent most of the time in the floor, flailing through a fog of asphalt, thanks to a welter of glitches: hardly a dignified position for a man in the grind of middle age. But then, I can’t imagine him doing anything as uncouth as ageing; as someone who has forged a career from a polite but firm disagreement with gravity, why should he succumb to the touch of time? I like to think that he, like Dorian Gray, struck a deal: whereby the games that bore his likeness would wither in his stead. And wither they did. Senescence seemed to set in, rather fittingly, around the time of Tony Hawk’s Downhill Jam—followed by a long noseslide, from mediocre to outright mess.

What, then, to make of Tony Hawk’s Pro Skater 1 + 2? Well, the title is to be commended. Not for Mr Hawk the brain-draining blur of Call of Duty: Black Ops Cold War, another Activision-published release, whose name takes after its subject, spreading disinformation and mass confusion. Nor any graceless appendages, like Spyro Reignited Trilogy or Crash Team Racing Nitro-Fueled. Here we’re told exactly what we’re getting for our money, pitched as simple arithmetic: 1 + 2 = a trip back to the series’ happy height, on the PlayStation, when its ramp-strewn world was wrought by Neversoft, and seemed a fair reflection of our own, as skating culture reached a clattering peak in the early 2000s. Given that this marks the third occasion on which the first two entries have been re-released—after Pro Skater 2x and Pro Skater HD—you may wonder why on earth you should bother. 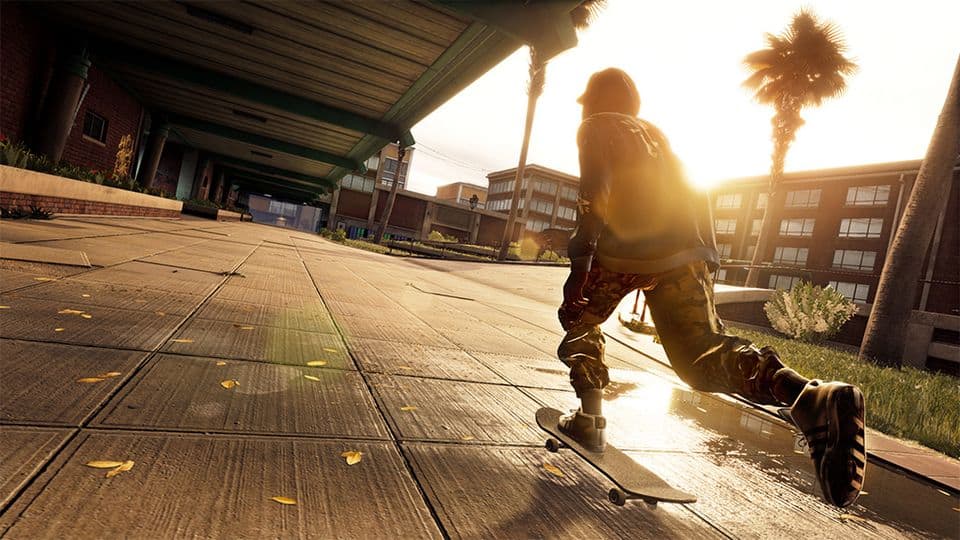 There are a few reasons. For a start, you’re rarely on earth. The game’s pleasures lie in the zone just above it, gliding over its rails and grazing its concrete. There, loosed from the grip of logic, you find the familiar quarters of daily life—the school, the mall, the street—hauled out of the humdrum into a realm of heightened abstraction. The flavour of the action is pure arcade. If, in 2007, you were drawn away from Proving Ground toward EA’s more sober, reality-bruised Skate and mourned the loss of the outsized and the zany, then this will feel like a salve. Euphoric, building-hopping feats of inhuman prowess are all carried out in pursuit of a high score, and strung together in a stream of unconscious controller inputs. You may find that you emerge, breathless, not just from an unbroken combo but from an afternoon that has raced by in an eye-reddening blink.

Then, there are the developers, Vicarious Visions and Beenox. Both have displayed—with Crash Bandicoot N. Sane Trilogy and Crash Team Racing Nitro-Fueled, respectively—a surgical talent for the art of the faithful remake. This consists of making deep incisions into our recollection, delicately presenting us with the burnished result, and standing proudly in another studio’s shadow. There are few finer shadows in which to go about one’s fastidious work than that which is cast by Neversoft, whose games were never still. They were possessed of joyous movement. Is it any wonder that the developer that brought us Pro Skater 2 also gave us Spider-Man, that same year? The primal fun of effort-free motion abounds in both, whether stuck to a thundering board or winging down the boulevards on a silken thread. As the Tony Hawk series rolled on, it amassed a muddy crust of gimmicks—storylines, peripheral hardware, Bam Margera—that jammed the clean, whirring wheels of its appeal. The new studios pay both respect and homage to the original releases by valuing their clarity above all else. 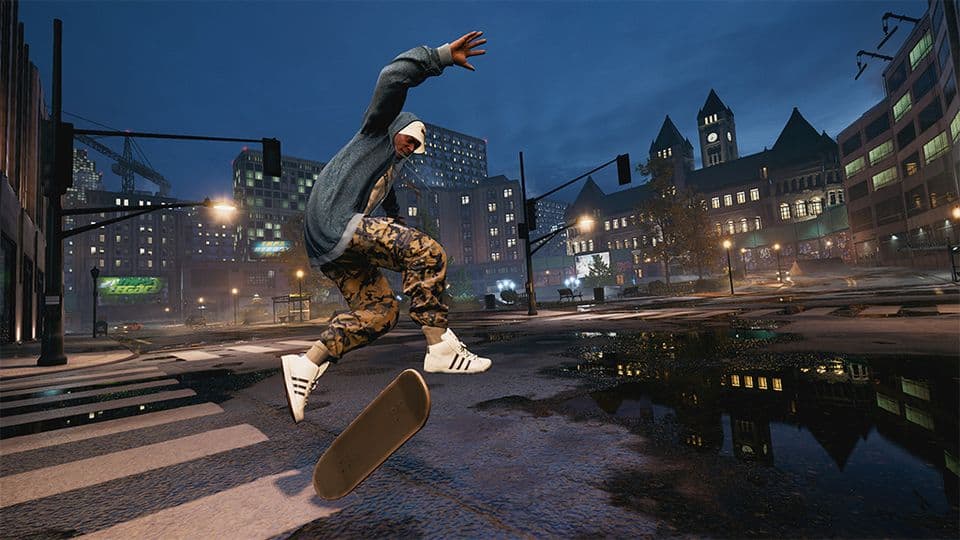 Hence you will find the first two games lavishly re-pressed in Unreal Engine 4, and presented with a beefed-up roster of skaters and a raft of new songs on the soundtrack. The art direction, by John Paul Rhinemiller and John Dobbie, is crisp and bright, honouring our memory of its subject. Check out Marseille, a level drizzled in the freshly squeezed light of an orange juice advert, or Warehouse, whose gnarly wood and high windows lend it the air of a loft. The groove of play, now as it was then, is as follows: pick a skater (returning legends, like Rodney Mullen, are joined by newcomers, such as Nyjah Huston and Lizzie Armanto), a location (17 classic skate parks await), and a song (be it an old, cherished number or, if you wish to walk on the wild side, a new addition, like “Can I Kick It?,” by A Tribe Called Quest). Then skate.

When you do, you realise that its strengths and strains originate from the same place. There is one advantage that Vicarious Visions and Beenox wield over Neversoft, but it’s hardly fair: the years. You notice it mechanically at first (the wall-plants and reverts of Pro Skater 3 are present) and, more gradually, in its power to thrill. There is no great innovation here, only the renewal of a love that once grew creaky. The series staled through repetition, and, though this entry steers away from the blunder and complication that blighted the later games, it benefits most of all from us. 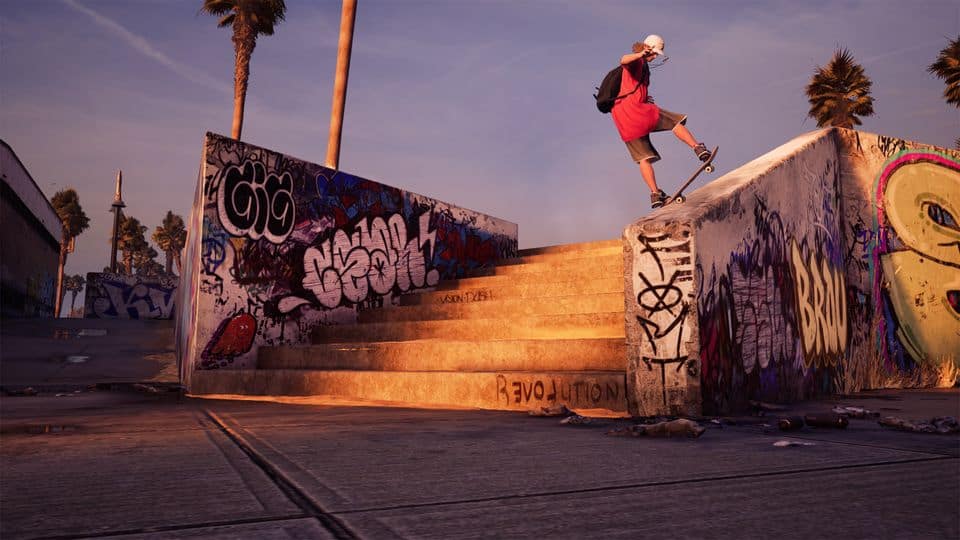 In his great essay on Grand Theft Auto IV, “Video games: the addiction,” Tom Bissel puts it to us that “maybe all a game can do is point at the person who is playing it, and maybe this has to be enough.” As I played Pro Skater 1 + 2, I couldn’t help but feel the pain of what was being pointed at. I suspect it will be felt, too, by those whose shins bear the scars of a skating dalliance; who still encase their feet in chunky DC shoes; and who have, in the time-warped bowels of their wardrobe, the unwise T-shirts of another epoch. We have found, to our horror, that we have not unfurled into kickflipping superstars, that our waistlines have thickened, and that heaven may not, after all, be a half-pipe. But perhaps it could be a weekend on the sofa, spent not quite in the company of a masterpiece but in front of a gleaming mirror, and a magnificent vision of the newly decked-out past. Maybe this has to be enough.

The new studios pay both respect and homage to the original releases by valuing their clarity above all else.
8 Skating Art-style Nostalgia Getting older 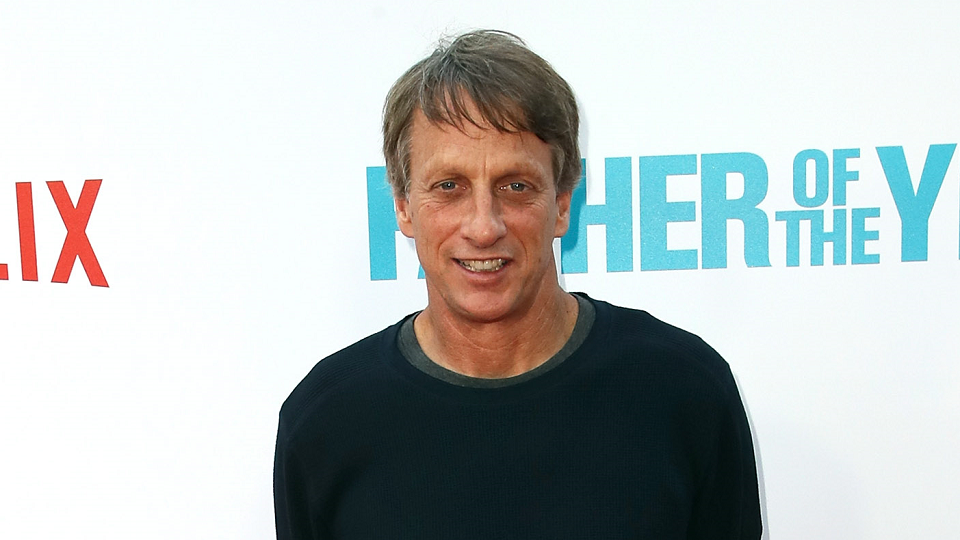 Tony Hawk has ranked all of his video game soundtracks