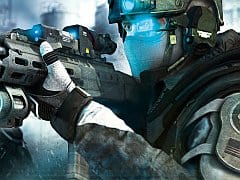 So here it is, the real gem of the 3DS launch line-up. It’s not a new Mario game, sadly, nor is it a racing game, or even a portable version of Street Fighter. No, our triumphant star is actually a thoughtful little strategy game, and a turn-based one to boot. Bet you didn’t see that one coming.

Actually, some of you may have done – because Ghost Recon: Shadow Wars is the work of Julian Gollop, creator of the X-Com series – you know, that game old farts like me are always harping on about. If you’re younger than 25 or so then there’s a good chance that neither name will mean much to you, but that doesn’t matter. All you really need to know is that this is a turn-based military affair from Ubisoft Sofia, one that finds you ordering your small band of elite troops about a 3D, grid-based battlefield. It’s essentially a board game version of The A-Team, only without the need for dice or a burly Mohawked chap with aerophobia.

Despite the familiar branding, this bears scant resemblance to previous Ghost Recon titles. The action is viewed from an elevated perspective, giving a broad outlook on the combat. You can use the C-pad to pivot the camera around, but there’s little need to do so unless you’re trying to get a sense of the 3D effect. Since there’s no Fog of War, it’s relatively easy to keep track of your various threats and objectives, and given the game’s turn-based nature there’s plenty of time to decide what you should do next. The enjoyment here lies in making a careful plan to exploit your team’s abilities, and then watching as things come to fruition. Or not, as the case may often be.

The six Ghosts in your squad fall neatly into established gaming archetypes. Your commando-style leader is joined by a sniper, a medic, and a heavy-weapons chap, along with a stealthy scout and an engineer, who can deploy an independent turret. Sometimes you’ll only be using a few of these caricatures, but on other occasions you’ll have the full six plus a smattering of largely expendable helpers. As familiar as they may be, each of your specialists has a clear-cut set of strengths and weaknesses that mesh well when used as part of a considered strike.

Each character is limited to one movement and one major action per turn, and when you launch an attack the aggressor is subjected to return fire – not just from their victim, but also from anyone else who happens to be within range. Successful assaults are therefore dependent on co-operation, timing, and an awareness of who you’re going up against. You’re able to check your foes’ lines of sight at any time, but even so it’s surprisingly easy to put a foot wrong, and thanks to the fact that you’re limited to a single mid-game save slot, the more complex engagements can get quite tense.

Story-wise Shadow Wars ploughs the familiar Tom Clancy furrow, pitting squeaky-clean Americans against a collection of sinister (and balding) Russian Ultranationalists. It’s daft stuff, but at least the villains’ cutscenes benefit from growly bear imagery and some pleasingly pompous music. The plot’s primary purpose here is to drive your next assignment, and in this regard the game succeeds in throwing up a decent spread of scenarios. You’ll start out in small-scale tussles against Kazakh bandits, but before long you’ll be taking on grander tasks – protecting besieged gas pipelines, ambushing convoys and blowing up secret bases. There’s a steady sense of progression, with missions swelling from 15-minute jaunts into sprawling escapades that take the best part of an hour.

As your duties grow in complexity, so too do the strategic demands placed upon you. It’s easy to tear through the opening levels without much thought, but by the third chapter of the campaign you’ll be dealing with a deep set of considerations, both on and off the battlefield. Cover and elevation both have a subtle but significant effect on battles, while capturing control points can unlock airstrikes and other support for your troops. At the end of each mission you’ll also get the chance to upgrade your chosen specialists, adding a further level of tactical play into the mix. These features are hardly new, or even that unexpected, but their combined effect results in an engaging and moreish strategy game.

Shadow Wars’ only major weakness is that it largely ignores the secondary functions of the 3DS. StreetPass goes unused, nor is there any fancy way of using the gyroscope to whirl about the map, or something equally silly. It’s easier to criticise the lack of online options, although there’s still a solid multiplayer option that allows two players to battle each other on one console, passing the machine back and forth. Given the game’s turn-based nature, this is arguably a more efficient setup than Download Play – for local competition, at any rate. Even the use of 3D itself is relatively subtle, daubing the environment with an extra level of “ooh-look-you-can-see-right-down-that-air-vent”. In short, it’s fairly obvious that this was originally planned as a vanilla DS release.

All the same, a good game is a good game. If you’ve bought your 3DS to show off its new-fangled gadgetry, you might do better to pick up one of the other launch titles. But if, heaven forefend, you might actually want to actually play something fun, or something that requires a bit of thought, look no further. For all its lack of 3D showboating, Shadow Wars offers genuine depth.

For all its lack of 3D showboating, Shadow Wars offers genuine depth.
8 Solid multiplayer Plenty of strategic depth Lots of missions, and varied objectives Doesn't make much use of the 3DS features