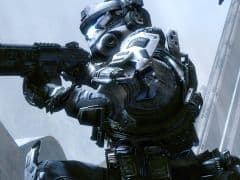 An evolution of the core Call of Duty concepts rather than a revolution for multiplayer shooters as a whole, Titanfall feels, in a way, like a hyper-budgeted mod that will only truly see its aims realised in the inevitable sequel. This is not necessarily a negative: it’s a tremendously enjoyable game, and one that both expands upon, and strips back, some of the excesses of its spiritual predecessor.

Whereas Call of Duty is bloated and wobbling towards death by gluttony, leaning on cheap gimmicks (Michael Myers?), Respawn – and Zampella – know what the real appeal is. 6v6 is a smart move, allowing for (stupid) bots to keep you killing while giving the titans room to manoeuvre. It’s a game of trade-offs, discarding the vogue for Yet More Unlockable Bullshit and instead confronting players with obvious choices: strength or speed, light or fast, yet still asking them to adapt to change when the hardware is called in. Unlike killstreaks, everyone gets a titan, choosing from three available types: how you plan for that eventuality is all-important.

As is how you decide to tackle the environment. Titanfall may be almost identical to CoD in terms of gunplay: ADS, pull trigger until someone falls over. But by introducing proto-jetpacks and parkour – and intricate running routes that can be exploited – Titanfall is even faster and more strategic than Activision’s shooter. It’s a game that prizes player agency and clever planning, with your mech often being used as a proxy or guard dog, and it encourages natural teamwork, even in defeat with the excellent dropship extraction ‘epilogue’.

But for all its strengths, its reliance on tried and true modes and rigid maps stops Titanfall achieving its full potential. Capture the Flag, Attrition, and Domination are the best gametypes, but none of them show the same invention that’s occurring elsewhere in the title, leading to a feeling of natural fatigue. Some of the maps also feel too similar to each other, lacking in distinction, and campaign multiplayer is sadly non-dynamic. A very good first instalment then, but the best is yet to come.

A very good first instalment, but the best is yet to come.
8 A nice evolution of the Call of Duty formula. Fast and addictive. Game modes showing their age. Maps aren't distinct enough.