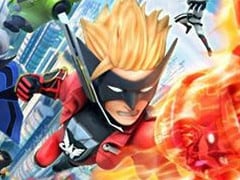 At times, The Wonderful 101 represents Platinum games at its very best. Don’t be deceived by the isometric view or the cutesy looks, though: this is a Hideki Kamiya action game through and through that’ll challenge even those that have done Devil May Cry on Dante Must Die. Mastering your one hundred heroes and their abilities will take time. A lot of time.

You take control of a bunch of heroes who are able to morph themselves into various weapons. You do this by drawing on the Wii U gamepad or twiddling the right stick about, so you can fashion your chaps into a gun, a sword, or a giant fist. You then use these (literally) man-made weapons to repel a colossal full scale alien invasion. It’s hard at first, but it’s fair. It’s like ‘rock paper scissors: ludicrous anime edition.’

It’s almost like a Platinum’s (and by extension Clover’s) greatest hits. It has the style of Viewtiful Joe, the shape drawing mechanic of Okami and the cheeky sense of fun and humour that was so prevalent in Bayonetta. It’s a blast, and sometimes so bombastic it makes Bayonetta look like Dear Esther. It’s the result of the best game developers in the world being given free-rein to do what they want.

However, with free rein occasionally comes over-indulgence, and it does feel like it could have done with a bit of editing. It’s a big game, and there are moments where you wish it was more concise. Bosses often come back from the brink just when you thought you’d finally killed them, which can grate. It’s been done to make the whole thing feel more grandiose, but it becomes wearying. Fights can also feel very drawn out at times. You can’t pick this up for a quick go; you’re in this for the long haul.

That said it’s hellishly addictive. The sense of fun is palpable throughout, the characters are mostly pretty likeable, and surprisingly the plot’s fairly absorbing. It helps that it’s been pretty sharply written too, full of excellently corny jokes and one liners.

Almost as good as Kamiya’s twitter feed. Almost.
8 Contains the typical Platinum magic Represents a good challenge Can be too drawn out at times