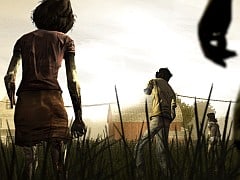 Telltale Games have always been masters at raising the dead. For about a decade adventure games had all but flatlined until Telltale almost single-handedly resurrected them in the public eye, delivering titles based on such beloved properties as Sam & Max, Monkey Island and Back to the Future. Now, they’re using their necromancy to raise the actual dead in their newest offering based on Robert Kirkman’s comic book zombie series, The Walking Dead.

Newcomers to the series, or even those overly familiar with the comics and so-hot-right-now TV show, will be delighted to learn that Episode One stands on its own and follows a mostly new cast of characters whose adventures run parallel to the those in the comics. All you need to know is the following: zombies.

You play as Lee Everett, a former college professor on his way to prison for murder when his escort gets in an accident, leaving him stranded in the middle of an undead invasion. Before long he becomes the surrogate father of an eight-year-old girl as the two seek a way to get the hell out of Dodge.

In many ways, The Walking Dead plays itself. Puzzles are kept to a minimum, their solutions entirely logical and obvious. Instead, the gameplay primarily consists of quick-time events and making choices. It’s a bit like Heavy Rain, only it makes more sense.

Most choices need to be made under pressure. You’re only given a few seconds to respond to dialogue, and the undead won’t hang around all day while you decide who to rescue. It’s easy to panic and accidentally say the wrong thing, which often comes back to haunt you in unexpected ways. One time I told a lie that conflicted with something I said earlier, and the person I was talking to picked up on it. As is true to form, there’s plenty of bickering in a zombie apocalypse and whose side you take will alter your relationships. Choices are also surprisingly complex: there’s no good/evil morality bar and deciding the ‘best’ course of action is never easy.

Usually games that present these sort of choices cast you as a blank slate, as any player agency could undermine a strong narrative. The Walking Dead dances around this brilliantly, positioning Lee as a defined character with his own baggage and personality but with writing that exhibits a deft touch in filtering player input through him. It feels like you’re advising a friend rather than penning your own Mary Sue fantasy.

Even when The Walking Dead isn’t interactive, a smart script and expert direction makes it enjoyable to watch. Seeing how each character deals with the card they’ve been dealt is harrowing, and there are plenty of shocking tragedies waiting to unfold. Don’t let the cartoonish, cel-shaded aesthetic fool you; this is an unflinchingly brutal portrayal of a zombie outbreak.

Sadly, there are a couple flaws that hold The Walking Dead back. For one, there are mild performance issues (on PS3 at least) where QTE-heavy cutscenes can get choppy (though it’s nowhere near as serious as in Telltale’s disappointing Jurassic Park). More irritating are sections where you can’t progress until certain conditions are met. You can’t run through the infested streets to retrieve a needed item, for instance, until you’ve completed the tasks necessary to set up a diversion. Since most of your actions have an immediate impact, it feels overly restrictive when Lee resists your suggestions in favour of old-school adventure design.

These speedbumps are few and far between, however. The Walking Dead: Episode One is less a traditional adventure than the first part of a promising new choose-your-own adventure, with tight, well-crafted sequences and a sharp script that manages to calibrate itself to your input with minimal awkwardness. This novel mix of cinematic direction, episodic storytelling, and player choice defies convention and the result is an extraordinarily accomplished piece of interactive fiction.

The Walking Dead is an unflinchingly brutal portrayal of a zombie outbreak.
8 Fantastic writing Difficult decisions You can't execute plans until all the pieces are in order Some performance issues