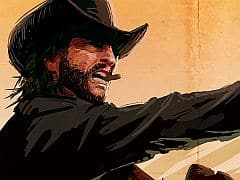 Call me a cynic, but when a game decides to call itself “The Shoot,” my expectations plummet. Short of labelling the thing “Bang Bang”, I’m not sure I can think of a more obvious, uninspired name for an on-rails shooter. To be fair, the title also works as a weak double entendre – denoting the game’s film-making theme as well as its focus on endless trigger-play – but there’s still something that suggests an utter lack of ambition and imagination on the part of developer Cohort Studios. Sure enough, the game itself proves these suspicions to be woefully accurate.

The Shoot uses the Move controller as a makeshift lightgun, casting you as an anonymous Hollywood wannabe blasting your way through the five B-movie scenarios. Rather than attempting to serve up any sort of serious plot or continuity, the game styles itself as a light-hearted marathon of score-based shooting challenges. In terms of raw ambition alone, this setup would already place The Shoot far below the likes of House of the Dead: Overkill and Dead Space Extraction – in fact, it’s only a few rungs up the gaming ladder from sniping tin ducks at an old-school fairground. Still, there’s nothing wrong with a game having simple aspirations – provided that the execution is something close to perfect.

Regrettably for all concerned, The Shoot falls on its arse in almost every way. The tongue-in-cheek art style is a lonely point of success, dressing your targets as wooden cut-outs and Ed Wood-style models dangling on bits of string. It’s a nice idea that carries a degree of charm, but any goodwill towards the game itself will almost certainly evaporate as soon as you start to play. The Shoot somehow manages to be soporifically dull and utterly exasperating at the same time. I don’t suffer from narcolepsy, but if I did and I spent the afternoon attempting to build a six foot-high house of cards, I’d imagine that might feel a bit like an extended session with The Shoot. It really is that annoying.

Initially it seems as if Cohort Studios is gunning for a casual audience: the colourful presentation and use of comedy voiceover certainly underline this approach, and the first, Western-themed scenario gives the player a remarkably easy ride. You’ll notice immediately that’s there’s no health bar in the true sense, but rather a circular indicator that relays how The Director of the film feels about your performance. Do well, by hitting successive targets without missing, and the bar will fill up; sequential hits also serve to build up your score multiplier and unlock three special abilities – we’ll return to the latter in a moment. On the other hand, you’ll be penalised for taking damage or for blowing away ‘innocent’ targets from time to time. If you annoy The Director too much he’ll halt filming, forcing you to use up one of your lives. This cuts both ways, however: Mr Director comments on your efforts via a series of repetitive samples that will start to grate within minutes – and if he aggravates you enough, there’s every chance that you’ll simply turn off your PS3.

Still, the four stages that make up the cowboy diorama are competent enough. True, they’re easy to the point that you can stumble through with minimal effort – there’s no punishment for ignoring most targets – but at least it can be said that the game won’t make you angry. However, from the second scenario onwards, things change. The 50s sci-fi levels are accompanied by a significant leap in difficulty, and the game begins to lob harmful projectiles at the player on a regular basis. In low numbers it’s possible to shoot these missiles out of the air, but most of the time you’ll be forced to dodge – an action that requires you to physically lean left or right. This gets tiresome quickly, particularly given that you’ll rarely escape harm, such is the leaden pace of your evasive movements.

As mentioned earlier, you’ll be rewarded with three flavours of special ability if you’re able to chain together 10 or more successful hits, and it soon becomes clear that these are essential for making any real progress. Two of these powers – a screen-clearing shockwave and a rapid-fire-plus-invincibility combo – are triggered by firing the Move Controller at the floor or ceiling; the third and arguably most useful perk lets you slow down time for a brief interlude – but to activate this trick, you’ll need to spin in a circle. Some genius clearly thought this would lead to endless guffaws at particularly uninspired parties – the kind where half the attendees lock themselves in the bathroom with a bottle of vodka.

But while it’s funny to watch someone else being forced to do this (in theory – I couldn’t persuade any of my colleagues to do it; they certainly laughed at me), this requirement makes the power largely useless: even though it only takes a second or two to spin on the spot, that’s usually enough time for you to be hit by a barrage of projectiles. In theory, you’re supposed to be able to trigger the slow-mo by waving the controller in a lasso motion, but this rarely seems to work. Either way, you’re left feeling like a bit of a tit without any discernable benefit.

You see, The Shoot suffers from something of a split-personality disorder. The jocular presentation and “hilarious” gestures smack of early Wii shovelware, but from the second scenario onwards the game starts to pretend that it’s a hardcore title – even as it’s forcing you to lurch about like a reluctant ballerina. Even when you finally manage to grind through the sci-fi stages, for example, you may fail to unlock the following Mafia-themed set – because there’s a minimum score requirement to unlock them. It’s a ridiculously misguided bit of design: most casual players will never reach the demands of the later stages, and serious gamers won’t want to. I can only assume that someone at Cohort Studios thought this could genuinely inspire Geometry Wars-like levels of devotion. If that’s the case, they need to have their head examined.

Aside from the aforementioned technical failings and bone-headed design, there’s no two-player mode in the main campaign. True, a second participant can join in for Score Attack mode and for a set of challenges that unlock if you gather collectibles from within each scenario, but it’s still distinctly odd that you can’t have a pal join in for the meat of the game. If it weren’t for the abundance of destructible items in the environment, there’d be nothing here to even remotely suggest you’re playing a current-gen title. The game that Cohort was trying to make – or part of it, at any rate – was released on the original PlayStation in 1998, when it was called Point Blank (Oh Point Blank! Where did you go? How my aching heart yearns…).

While it’s early days yet, it’s safe to say that PlayStation Move isn’t exactly overflowing with great titles at present. If you’re an early adopter, the chances are you didn’t spend all that cash to play embarrassing, watered-down rail shooters that are effortlessly eclipsed by their Wii-based rivals. Buy this, and the only shooting you’ll be doing is to yourself: in the foot.

Buy this, and the only shooting you'll be doing is to yourself: in the foot.
3 The art style is quite cute Fails to cater to casual or hardcore demands Gesture controls are embarrassing and unreliable Barely uses Move's capabilities

Take out the bad guys in style.

Take out the bad guys in style.