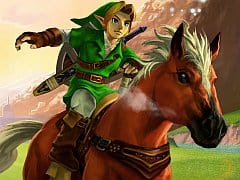 The Legend of Zelda: Ocarina of Time 3D Review

I bought the gold cartridge edition of The Legend of Zelda: Ocarina of Time at its original 1998 UK launch. I remember the day well: heading to my local indie store to pick it up, briskly walking home, and sitting down to play the game I’d been anticipating for months. Back then I was a complete N64 fanboy, too, so the release of Ocarina of Time was a very big deal.

For all this hype, though, I only ever finished the game once (and that was actually through a friend playing the final few hours on his game save instead of mine) and haven’t touched it again over the last 13 years. While I did play what many consider to be the best game of all time, then, I came to The Legend of Zelda: Ocarina of Time 3D with little emotional baggage and less inherent love than commonly expected.

What’s obvious after just a few minutes is that Ocarina of Time still feels unique. Modern games tend to firmly hold the player’s hand, mollycoddle them in the right direction, and in many cases put up great big signposts so that no-one can get stuck or lost. Nintendo didn’t take this approach back in 1998. Ocarina of Time is an adventure game in which you really have to explore and find things out for yourself. You need to speak to NPCs and go with what they say, wander about and try things out, and generally ‘waste’ a lot of time. There’s no breadcrumb trail in sight (hints and tips videos have been added, but are completely unobtrusive), and Ocarina of Time is all the better without it.

Ambling about trying to discover what to do next in order to advance your quest is what makes Zelda games and Ocarina of Time such a joy. The sense of place is far greater here than in almost any RPG or adventure title I’ve played in two generations of consoles. You’re not just a video game character in Ocarina of Time.

You are Link. A boy who really doesn’t know what he’s doing, despite being given the unenviable task of saving Hyrule from the evil Ganondorf and rescuing Princess Zelda in the process. Each village in the game is full of characters with something to say and problems to dump on the young adventurer, yet you’re expected to absorb it and get on with the daunting job at hand.

In truth the ‘what’ and ‘why’ of your task is secondary to the doing itself. During the adventure I didn’t enter each epic dungeon desperate to get to the end in order to get closer to defeating Ganon, instead just happy that there was another dungeon to work through. These self-contained areas are, at times, so baffling that you’d give up if they hadn’t been designed with so much genius.

And, yes, the Water Temple has been made easier due to some colour coding, but considering how tricky that was in the original it’s a fair enough alteration.

While your quest throws up similar scenarios and gameplay mechanics along its duration, it’s rare that you’ll be asked to do exactly the same thing twice. Ocarina of Time’s mechanics evolve. Not only does Link get turned into an adult (bringing with it new tools and a darker kingdom to explore), but things learnt before are built upon. While you find out that you can burn things and fire arrows to activate switches, for example, these two ideas will combine later on to create fire arrows.

Other areas of the game’s design are equally inspired. The large Hylian Shield you gain as a child can’t be held properly – instead Link cowers underneath like a turtle hiding. It’s only when grown up that it can be held like an actual shield. The hookshot, a device which you assume is primarily to be used to latch onto wooden objects and propel Link towards them, comes in equally handy during combat, serving as an ever-present projectile weapon.

The titular Ocarina serves as a way to cast magical spells that help you solve puzzles, access secret areas and summon characters. These, learnt throughout the quest, play out as incredibly catchy and instantly memorable tunes – which for long-time fans will feel like jumping into a time warp. I challenge anyone to play Ocarina of Time and not spend your free time humming the various tunes, be it Zelda’s lullaby or Saria’s Song.

I haven’t even touched on your trusty steed, Epona. While you first meet Epona when Link is a child, it’s not until much later that you get to ride and keep her. With Hyrule under Ganon’s control, Lon Lon Ranch is under new management and Link must best the manager in a horse race in order to free the horse – and you’re only really free once you dramatically escape by jumping over the gate of the ranch. Having learnt Epona’s Song as a child, you can use this to bring her to you while in Hyrule Field and even convince cows to give you health-replenishing milk.

When you’re not trying to figure out how to solve puzzles in dungeons or just find out what you should be doing next, you’re often engaging in battles against a variety of foes, both big and small. Ocarina of Time introduced Z-targeting, which let you stay focused on an enemy while moving around – something that didn’t really exist until then. While the Z trigger has been changed to the L shoulder button on the 3DS, the system is as it was.

Holding the handheld comfortably while frequently using L was a little awkward at first, but soon became second nature, although a bigger problem is the slight awkwardness when trying to lock onto enemies and get Link facing the right direction. At times Link just doesn’t want to target an enemy, or will lock on but not have the enemy in view. Aiming with your boomerang and bow has been helped thanks to some incredibly intuitive gyroscopic aiming by moving the entire handheld, but be warned that this will likely destroy the 3D effect (something worth leaving the slider turned on for) and cause a double image – close one eye during aiming to avoid this problem.

The 3DS’ touch screen is used well, offering four item slots for easy access (two of these can also be accessed via the X and Y buttons), displaying a map and other items that would have otherwise cluttered the main game screen. It’s a neat system that makes up for the 3DS’s lack of buttons in comparison to the N64 pad, but it’s a shame that items can’t be assigned to the d-pad for quick access slots.

Visually Ocarina of Time 3D has seen significant changes over the N64 original. Character models and animations have been redone and all the textures in the game have been smartened up in a way that simply wasn’t possible on the now ancient Nintendo 64 console. The result of all this is a game that looks how you remember the original, which isn’t exactly cutting edge by today’s standards but in reality is a huge step up over the blocky visuals and juddery frame rate of the N64. Newcomers are likely to be less impressed, but the world is still a joy to explore even if some of the dungeon and overworld design is rather angular.

There was a question before Ocarina of Time 3D’s release over whether or not the game suited a handheld, but it unquestionably does. Would I have preferred a remake for the Wii U that I could have played on a TV or a handheld device? Yes I would. But that doesn’t mean this isn’t a brilliant version of the game that you can pick up whenever you like, stop at any point you wish (by closing the lid), and experience in wonderful 3D. Hand holding in modern games was certainly necessary in order to make video games popular with the masses, but Ocarina of Time wasn’t made for that new generation. This is a hardcore game through and through, and one that undoubtedly has to be experienced by anyone who classes video games as one of their hobbies.

While other games have built on many of the mechanics and ideas The Legend of Zelda: Ocarina of Time brought to the industry, somehow Link’s N64 debut still feels as fresh and exciting now as it did 13 years ago. We knew then that Miyamoto and co had made a classic, but it’s only now that we can see just how revolutionary Ocarina of Time actually was.

We knew then that Miyamoto and co had made a classic, but it's only now that we can see just how revolutionary Ocarina of Time actually was.
10 Charming visuals Invokes a desire to explore Incredible sense of adventure Slightly dated combat

Legend of Zelda: Ocarina of Time

Legend of Zelda: Ocarina of Time