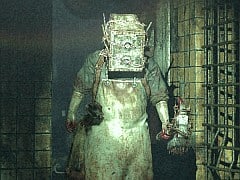 The Evil Within Review

Note: the embargo for media that received The Evil Within from Bethesda is on October 14th, the day of release. As Bethesda declined to send us a review copy of the game (presumably due to the score we gave Wolfenstein: The New Order) we bought our own copy. As such said embargo does not apply, hence why the review is live now.

One of the most interesting things about famed Resident Evil creator Shinji Mikami’s latest is how much it feels like Silent Hill. While the influence of past Capcom classics is obvious – it plays like a cross between Resi remake’s slow-burn horror and resource management while effortlessly slipping gears into the slasher-terror of Resi 4’s action – The Evil Within’s paranormal setting gives the director free reign to play with notions of reality in a way that resembles Team Silent’s best. Crumbling hospitals, dilapidated prisons, the odd, dreamlike feeling that none of the spaces you inhabit bear much relation to any real-world rules: you wouldn’t be surprised to bump into James Sunderland.

Does the combination work? It does, even if The Evil Within doesn’t hit the heights of Mikami’s previous work. It’s a game that expertly sustains a feeling of dread, and knows when to ratchet up the feeling of being utterly overwhelmed, first slowly then suddenly in a way that induces sheer panic, much like Resi 4 before it. But detective Sebastian Castellanos is no Leon S. Kennedy: there are no suplexes or diving out of windows here. Instead Castellanos is a man who struggles, who limps, who, like the player, has to fight tooth and nail to prevent the next enemy encounter being the last.

The game is divided into distinct chapters, each beautifully presented in 2.35:1 ratio and backed up by superb, grisly art direction as well as technical grunt, before pulling players out to a menu when each is completed. It seems an odd, momentum-breaking decision at first, but later reveals itself as an effective way of letting players simply breathe again. Beyond mere survival The Evil Within’s chapter objectives (find a key, flip a switch, etc) are simple, and for good reason: they serve as effective ways of focusing the terror.

From the word go the game is about survival in its basest form: there’s a lot of action, but none of it is macho or glorious, and most of it is in the service of getting the fuck out of town. Your foes – whose tactics are essentially the same as the ganados in Resi 4 – work perfectly in these dreamscape worlds: they just keep coming.

Mikami, more than perhaps anyone, understands that the secret to gunplay and enemy encounters is crafting weapons that are actually tools, with specific functions, not just bang-bang power fantasies. The Evil Within’s environments are cramped, dangerous, and oppressive. But they’re also that to your enemies. Best laid plans will often go wrong, but the maxim remains: use your weapons and items wisely.

Failure to do so will result in death, and you’ll probably die a few times anyway as a matter of course. Enemies are tough and intelligent, moving in packs and swarming the player, using melee and ranged weapons to box Sebastian in. Their resilience – a well-placed shotgun shell to the face sometimes isn’t enough – is at the heart of their danger. In a nod to Resi remake’s Crimson Heads, one of the few times players will feel safe is after burning downed foes. Even then, matches are at a premium.

There’s a satisfaction to combat that feels distinctly Mikami – every encounter is a test, a potential last stand, and it takes true skill to come out alive. Choices have to be made – do you use the various tricks and traps against your enemy, or break them down into ammo for your multi-purpose bow? It’s up to you, which makes combat so much fun.

It’s these elements that drag you through a game that is, on the face of it, exhausting to play. Even when it isn’t at its best, you’ll want to press on. It sags considerably in the middle, unable to match Resi 4’s superb pacing and letting some rather uninspired environments get in the way. Sometimes you’ll be killed cheaply, which given the Herculean effort needed to survive at all can grate.

At times it feels like a Mikami megamix: it has the village with the chainsaw-wielding dude, another mansion, etc. But Mikami does this so well it’s difficult to get annoyed. It’s not unusual for directors in either film or games to recall past glories, and few do it better than Mikami. Even though this isn’t his best, The Evil Within has enough magic to make it a worthy investment.

The Evil Within is one of the few action games I’ve played where, despite the comprehensive selection of firearms on offer, you feel close to powerless. The only way to survive is to keep a constant eye out for jars of green goo, which function as a currency for upgrading Sebastian’s various attributes.

Thankfully said goo is fairly prevalent, found on dead enemies and in the environment like the Pesetas in Resi 4. Unlike that game, however, The Evil Within takes upgrades as an opportunity to pull the player out of the main game and into a small hub (to say more is to spoil it). It’s a welcome breather in a tremendously bleak game, and the added wrinkle of various story elements taking place here means you’ll want to visit often.

Players can upgrade Sebastian’s health, weapons, and ammo-carrying capacities in a manner reminiscent of past Mikami action titles (although, sadly, briefcase Tetris is no more). Sebastien is tremendously weak in the early going, and so upgrading his health and sprint stamina is advised. Melee attacks, too, are near laughable in the opening stages (no roundhouse kicks here I’m afraid) and so upgrading weapons is a must. The Evil Within is a game where bullets are at a premium and the player must be economical with their resources, and adding more damage or a faster reload will often be the difference between life and death. Choose wisely.

A Mikami megamix of sorts that doesn't hit the heights of the director's previous work, but is enjoyable all the same.
8 Wonderful environments. Superb gunplay. Sags in the middle. Story never really gets going.