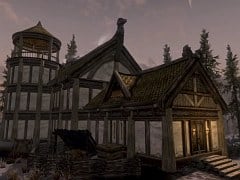 Clink, clink clink: Hearthfire is the faraway sound of a pickaxe striking stone over and over in the background while you’re whittling away some time on Twitter. It is the long wait between loading screens as you ping-pong across the world map to stock up on supplies, followed by frustrated grumblings as your character becomes over-encumbered from carrying too much vitally important junk. Hearthfire is work. But, hey, nobody ever said owning a home was easy.

Most of us are already a few steps up the property ladder in The Elder Scrolls V: Skyrim, and those prefabricated houses chucked in most of the furniture for much less money than just the cost of simply owning one of the three plots of empty land available in Hearthfire. But like mighty oaks from tiny acorns, Hearthfire’s potential properties sprawl out into much, much bigger estates, and the middle-classes love spending a little more on grow-your-own stuff anyway.

You can’t fault Bethesda’s intentions here, even if Hearthfire does bear many similarities to a Skyrim mod already available on the PC for free. But like Tom Hanks movie The Green Mile, Hearthfire will mostly be remembered for its bungled execution. While there’s a strangely compelling rhythm to rummaging around various shops and slowly assembling your massive house, including a slow and steady furnishing of a nice little trophy room and filling all those weapon racks with your priceless Daedric artifacts, there’s just not quite enough variety and customisation to make it feel like a worthwhile endeavourer.

Hearthfire begins with a courier handing you a string of letters the first time you visit one of Skyrim’s major cities after installing the new content (only some people aren’t getting the correct post, but a few teething problems are sadly to be expected by now). The jist of the whole pack is that you’ll be offered a chunk of land in either Hjaalmarch, Falkreath or The Pale. One quick travel to the Jarl’s steward of each particular territory, and a 5000 gold transaction later, you’ll have a deed to a plot of land in your respective area and can start constructing your new abode.

Only Hearthfire’s construction is basically just scrolling through a series of unfolding lists, so if you were expecting any freedom in your build then you’ll also be particularly disappointed. Grand Designs this is most certainly not, and your architecture style is limited to one of three standard, near-identical manors in a game that already had more than enough boring standard manors already available.

Playing Hearthfire feels like going through a shopping list, with you going out and collecting enough stuff to progress to the next stage of your build, and your only real choice comes from deciding what gets plonked on your north, east and west wings. This identikit construction means whatever you build will look strikingly similar to everything everybody else builds, which kind of takes the shine off the whole concept and also severely limits the amount of “look at my house” videos that people were probably planning to post on YouTube. Even your furnishings can only be placed in fixed locations, so after four or five hours of plodding around building your manor piece-by-piece you end up with something that looks like a bigger version of any old Skyrim house, albeit with a deer head you’ve framed over the mantelpiece yourself.

Hearthfire also widens Skyrim a little to allow for more stuff to plonk in your house once it’s done, like a bard and two children. But Skyrim’s children are terrifying, blank creatures with sob stories delivered in a distressing monotone drawl, who can trigger blank, pointless quests that you go about doing for no discernible reason. You wouldn’t want to live with any of them, really, and to be honest I’d feel more comfortable adopting the The Shining’s Grady sisters. At least the bards are up for a bit of a sing-along.

To me, Hearthfire feels more like Bethesda testing the waters for a deeper, more engaging home-crafting component in one of their future games, but for your 400 Microsoft Points you end up with what is easily the best house available in the game and the most conveniently accessible for dropping off your vast swathes of trinkets. But even though it’s been crafted piece-by-piece, Hearthfire’s land never feels like it’s truly yours, and the rigidity of the process robs it of any potential satisfaction. Despite the whopping size of your new stately mansions, Hearthfire feels cold and empty.

Even though it's been crafted piece-by-piece, Hearthfire's land never feels like it's truly yours, and the rigidity of the process robs it of any potential satisfaction.
4 Your new house can be quite useful Adopting a kid feels like Bethesda is really scraping the barrel Little variety Poor customisation options