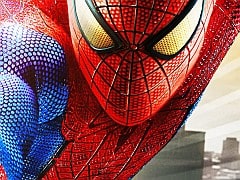 You’ll excuse me for damning a game with faint praise, but The Amazing Spider-Man is pretty good for a superhero movie tie-in. This is also the best Spider-Man game to roll off Activision’s sturdy assembly line in years, even though that isn’t saying very much.

This is a perfectly pleasant title, but if you stack The Amazing Spider-Man up against the rest of its genre – such as inFamous, Prototype and Batman: Arkham City – the webslinger’s latest outing starts to feel rather thin. Rocksteady’s 10/10 scoring smash hit is a particularly great reference point as it’s the game The Amazing Spider-Man cribs from the most.

Like the caped crusader, Spidey’s approach to taking down New York’s criminal elements is divided up between confronting them head-on or stealthily subduing them. A combat system that’s been lifted wholesale from the Arkham games feels immediately familiar when you go toe-to-toe with your enemies, but what’s missing are decent animations and any sense of heft. When Spider-Man attacks a villain he looks like a jerky lucha libre wrestler, and his punches and kicks feel so lightweight you’ll be genuinely surprised when his opponents fall down. A standard progression system awards you experience based on maintaining unbroken combos, which you can then use to open up new physical and gadget-based perks.

Against armed foes, however, Spider-Man can stealthily use his wall-crawling abilities to position himself above enemies before trussing them up in his webbing. Most stealthy instances take place indoors, mind, where the game is decidedly not at its best; Amazing Spider-Man comes into its own when the player is swinging freely. Beenox have wisely dumped the linear structure from its last two titles and instead opted for a wide-open sandbox for the player to tool about in.

And with great freedom comes a great amount of side quests, so you’ll often find yourself involved with beating up muggers, snapping photos for the Daily Bugle, rescuing infected citizens, stopping car chases and breaking up gunfights. There are also a couple of challenge missions available and a zeppelin (piloted by Bruce Campbell) handing out races. The rooftops above the city are also filled with comic book pages which award XP and unlock digital versions of classic Spider-Man comics.

Despite the humdrum nature of the missions, and the later addition of fiddly flying enemies, there’s a certain buzz to zipping around the city: it’s the closest the game comes to making the player feel like they are, in fact, a friendly neighbourhood Spider-Man.

By far the game’s weakest aspect is its plot. This tie-in title takes place roughly a day or so after the events of the film, having Spider-Man team up with Curt Connors to stop a shady corporation using Connors’ research for nefarious purposes. It seems the company in question (Oscorp, surprise surprise) has been blending human and animal DNA with disastrous results and released a plague on the island of Manhattan. Some of their failed experiments, such as The Rhino, The Iguana and Vermin, have also (again, surprise surprise) escaped.

While this may all sound initially promising it’s eminently forgettable in execution, with the game setup to shunt Spider-Man around bland and samey indoor environments, fighting bad guys and solving the odd puzzle. Besides this, most of Spider-Man’s most recognisable villains have been reduced to mindless, feral creatures here and in this form they’re all very uninteresting – the notable exception being Black Cat. There’s something of a twist in the plot, but it’s telegraphed quite early, and I can’t get into it here without heading into spoiler territory.

And speaking of spoiler territory, if you want to watch the film and you don’t want it ruined for you, avoid playing the game until you’ve done so, as it reveals several major plot points in the film early on.

The game’s presentation doesn’t help matters. The graphics aren’t great, the animation looks shonky at times and the camera occasionally goes haywire if Spidey gets turned around on a wall or a ceiling. The voice acting isn’t bad, however, and there’s the odd spark of brilliance in the dialogue, but Spider-Man and the NPCs around him tend to repeat themselves on a scale that is truly comical.

The Amazing Spider-Man feels like a template for a much bigger and better game. Beenox might have turned to Batman: Arkham City for inspiration in creating its first open-world Spider-Man game, but it’s just a pity Activision didn’t do likewise. There are many reasons Batman: Arkham City and Arkham Asylum are excellent games, but one of the more crucial ones is the fact that Rocksteady was given time and creative freedom in its impressive endeavours. Beenox has been tied into a spine-crushing annual development cycle ever since it started making Spider-Man games, and is now saddled with having to dovetail a movie reboot as well. On the evidence here, I’d dearly love to know what sort of game this developer would be capable producing if it was given a two-year development cycle, a bundle of cash and the freedom to take Spider-Man in any direction.

Sadly, we’ll have to wait on that, but in the meantime Beenox deserves some mild applause for constructing a game that succeeds in being consistently fun despite the fact it’s a movie tie-in.

Beenox deserves some mild applause for constructing a game that succeeds in being consistently fun despite the fact it's a movie tie-in.
7 Spider-Man is awesome Open-world webslinging Missions are a bit boring Too many indoor levels