The Adventures of Tintin: Secret of the Unicorn The Game Review 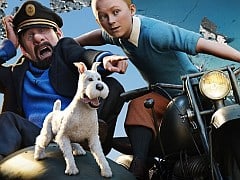 I’m not sure why I expected something good to come from Ubisoft’s The Adventures of Tintin, the tie-in game based on the Steven Spielberg/Peter Jackson CGI movie. Maybe it’s that the film’s trailers look gorgeous, or that the footage I’ve seen of the game suggested it’d be a stylish platformer. It certainly does look stylish at points, but the game is sadly no different to the majority of movie-licensed titles released every year.

Tintin’s main problem is the ridiculous amount of repetition, with a handful of gameplay scenarios recycled time and time again. You get some standard 2D platforming sections, along with some incredibly basic combat. Most enemies can be easily dispatched with a few punches, but sneak up behind one and you’ll be able to perform takedowns. You can also throw things at them, drop on their heads or make them run into walls. That might sound like a decent amount of options, but it’s not – especially when every combat situation is almost exactly the same and crops up over and over again.

You’ll team up with your dog Snowy and disgruntled mariner Captain Haddock over the course of the adventure, each offering their own limited gameplay mechanics. Snowy can sniff out where characters have gone (which is never very far given the small size of the environments) and dig for items, while Haddock relives stories of his ancestor, with these sequences playing like an on-rails version of Assassin’s Creed made for small children.

Vehicles crop up throughout, too. You’ll have to fly a small plane through storm clouds far too many times, take part in some aerial dogfighting, drive a motorbike and sidecar and fire at enemies while Haddock takes over the driving. These sequences, like the game as a whole, feel like the Fisher Price versions, seemingly designed for people who might never have played a game before. As a result the game is alarmingly easy, with any death (although the post-death scenes suggest Tintin doesn’t actually die) causing little to no trouble as you’re almost instantly popped back to a nearby checkpoint.

A perfect example of how the various mechanics have been reduced to their simplest form is the grappling hook sequences. At various points you’ll have to traverse the side of a building or boat, throwing the hooked rope from point to point in order to make it to an open window. In gameplay terms all you do is hold a button and repeatedly press another – that’s it. With the amount of interaction on offer during these sections Ubisoft might as well have simply shown them all as cutscenes.

The latter quarter of the game presents a slightly more interesting collection of levels, with Tintin having to use some more advanced platforming skills and throw items to unlock paths, but we’re still talking about beginner’s stuff really. If you think modern games are too simple, you’ll wonder if you’re actually still in the tutorial as you watch the end credits scroll by.

Aside from the main campaign, which won’t take you much longer than four hours to run through, there is a two-player cooperative mode in which you play as Tintin and Haddock, working together through a series of simple platforming levels. These stages take place inside Haddock’s dazed mind (having been hit on the head), so feature some surreal imagery, but the visuals are really the only interesting part of what’s on offer.

There are also challenges based around the Haddock swordplay levels, flying and sidecar sequences. On Xbox 360 you can use Kinect in an expectedly simple fashion (steering a plane using your hands does work quite well though), while PS3 owners can use PlayStation Move. You can opt to use standard controllers too, and if you’re going for high scores that is definitely you’re best option.

At times the presentation shines, due to the art style rather than any technical brilliance. There’s nothing here that would look especially brilliant on the Wii, let alone the Xbox 360 or PlayStation 3. Still, the watery levels manage to impress the most, and there’s something almost beautiful about the plane stages set inside storm clouds.

The Adventures of Tintin is a disappointment but perhaps my expectations should have been lower in the first place. It’s short and lacking in gameplay depth, but has moments where you’ll be fooled into thinking it’s all right. Visually it at least has style if not technical excellence, but underneath is a fairly typical licensed title.

The Adventures of Tintin is a disappointment but perhaps my expectations should have been lower in the first place.
5 Numerous game modes Visuals are stylish Far too simple Repeated gameplay sequences

The Adventures of Tintin: Secret of the Unicorn The Game

The Adventures of Tintin: Secret of the Unicorn The Game