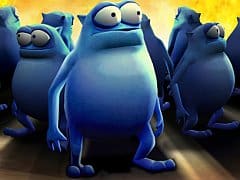 You never feel like you’re in control when playing Swarm, though that’s probably because guiding 50 hapless blue blobs to any particular destination was always going to cause problems.

The controls don’t help. On a basic level you’re weaving your squad of swarmites through a multitude of puzzles, with tactful squeezes of the left and right triggers to spread and contract the ranks. More advanced manoeuvres, such as getting the little sods to assemble into a thin vertical stack or even jump in unison, feel woefully imprecise. When the game progresses to the point that it’s asking you to perform these fiddly actions with both accuracy and haste, well, that’s the point you’re likely to get in a huff and switch off.

A wafer-thin exposition instructs you to collect strands of DNA – five of which are scattered around each of the game’s ten levels – to ensure the development of the swarm, but for the most part you’ll be fighting the combo meter. This sits in the top right corner and ticks up steadily when swarmites die, or by hoovering up the swathes of purple orbs littering each level. Nurturing your combo is especially important because progression is blocked until you hit each level’s strict score target.

Checkpoints dot each stage, and hitting one banks your current score while keeping your multiplier running – effectively handing you two caches of points for the price of one. In theory a checkpoint should give you a bit of breathing room and make fumbling at one of the game’s many pitfalls less devastating, but the inherent need for scoring means you’re better off restarting the level whenever anything goes south. And, believe me, it will.

Almost everything in the game hates you. Spinning blades chop your guys in half, walls of electricity spit out fatal blasts, and cracks in the ground hiss asphyxiating gas. Entire corridors are strewn with bear traps, landmines, and sensitive explosive barrels, though the game’s biggest killer is easily the many vertical drops into the frankly baffling amount of jagged spike pits.

Death is not the end, however. Because their untimely demises keep your combo multiplying, loss of individual swarmites is a good thing – the trick is to ensure the survival of enough cyan cretins to get to the next cache of eggs and pad out the ranks. This, as you might expect, is not necessarily as easy as it sounds.

The game revels in fatalities. Your army of pudgy, gormless swarmites are designed as lovable insects, dropped out of the weird throbbing tail-thing of a ‘mother’ entity burrowing through each of the game’s levels, and whose growth is illustrated on the world map. The designs of the swarmites are uniformly excellent, with the game’s primary characters exuding plenty of cheeky charm. If I saw a plush version of a swarmite for sale I would almost definitely be compelled to purchase it.

Still, it would have been nice to have seen more variety elsewhere. Level designs look uniform and samey, with a few different elements and lighting effects doing little to mask the repetition. More creativity in stage design would have been great, too, though I feel that there wasn’t too much Hothead could do with this considering the pernickety controls.

When Swarm does attempt to mix things up it becomes particularly guilty of throwing in unwanted barriers. The game’s fourth level will probably serve as the first real test for players, but after spending a few frustrating attempts to work out the knack of the scoring and controls the game then decides to further annoy by setting the fifth level completely in the dark. Manoeuvring through these corridors requires you to pick up objects, an expectedly fiddly process, and blights the experience entirely.

The game also features two boss encounters, unlocked by backtracking through the levels to pick up lingering DNA strands, at the halfway and end points of the game. These encounters are teeming with annoyances, concentrating everything wrong with the experience into five minutes of uninteresting combat. Muck up here – which, and you’ll excuse me for sounding like a broken record at this point, is easily done – and the game sends you right back to the start.

Finish any level and you can return with an added time multiplier, further bolstering your scores into the multi-million figures – an Achievement is rewarded for breaking 42 million in one level, for instance, though numbers this high will probably remain a pipe dream for most. Leaderboards are also integrated into (and integral to) the experience, though my list is completely barren almost a week after release. There are simply better games available if you yearn for high scores.

Swarm’s azure blood is obsessed with score running, and there’s certainly something decent bubbling underneath the surface that captures attention: I found myself gravitating back towards the game on numerous occasions, despite knowing I’d come to regret it after about half an hour. The crux of the problem is that Swarm’s frustrations are many and its rewards too few, yet there’s enough charm layered within that you’ll find yourself soldiering on despite a multitude of annoyances. I’m convinced the team at Hothead have a great downloadable game within them, but they’re still not quite there yet.

Swarm's frustrations are many and its rewards too few, yet there's enough charm layered within that you'll find yourself soldiering on despite a multitude of annoyances.
7 Decent concept The swarmites are great Little incentive to progress Controls are too fiddly