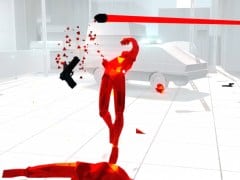 I’m not a cool person. I dress like a supply teacher, wear dorky black-framed glasses, and have hair that exists to cover my head. I read comics, hang out on internet forums, play video games, and, worst of all, write about video games. At least I don’t – shudder – enjoy sci-fi TV shows, but it’s obvious to all that ‘cool’ isn’t a term anyone would use to describe me. Superhot makes me, or at least my virtual avatar, look cool. Very cool.

Superhot isn’t a complicated game. You play in first-person, shooting, punching, and slicing enemies through a series of small areas. It looks like standard FPS stuff, except it’s not. People and items in the world only move normally when your character walks or performs an action (such as shooting a gun or punching a man in the face). When you’re stood still, or looking around, everything (enemies, bullets, smashed windows) moves at a fraction above still.

In action Superhot is unique and exhilarating. It takes a few runs to get the hang of things, but soon you’re dodging bullets like a pro. Then moments later you’re being gunned down by someone you didn’t see. While you can, and do, weave like Messi escaping the taxman, it’s essential to be aware of everyone around you. Red enemies come from all directions, usually armed. Some carry pistols, machine guns, shotguns, samurai swords – weapons you can grab by disarming them with a well-aimed thrown object or by shooting them.

Each gun has a unique bullet pattern: The pistol is the easiest to face, with single shots giving you space to move into; Shotguns are dangerous as they spray a bunch of bullets out as if sneezed by an unpleasant rush hour commuter; while machine guns fire out bullets so fast you need to disarm the assailant as quickly as possible. When you get through a stage (kill the enemies and don’t die) you’re shown a wonderful replay, putting together the entire run in real time rather than the stop-motion you played at. It’s awesome and makes you out to be John Wick and Neo rolled into one.

Tying together the stages inside the main campaign is an odd story that sees you talking to a friend about the game, via IRC. Something strange is going on and there’s a neat reveal, although it all ends rather soon. I’d guess most players will see the game’s credits in under three hours, but a set of challenges and score-based modes are unlocked to keep you playing. While the campaign isn’t difficult to complete, the same can’t be said about these extra game modes.

Endless mode, which throws enemies at you until you die, will be played to, um, death, and of the challenges, the no death run through the entire campaign stands out as one of the hardest to tackle. In this deviation on the main game, time freezes when you’re still, but that doesn’t mean the feat is easy. Upon finishing the game in a few hours I feared Super Hot had burnt out, hitting great highs but then nosediving into an ice bath. Sure, I’d have enjoyed a longer campaign, but what comes after is a much trickier beast to overcome.

Superhot’s art style is minimalistic but stylish, and it looks great. The world is painted white, with objects, enemies and bullets adding colour. The result is a game that gives you simulations of scenes where you can add your own imagination on top. Take one stage, in which you walk from a toilet into a bar. After laying into a peeing man with a three-punch combo, then smacking an incoming foe with a glass bottle, you spot a pool table. You think fast, pick up a ball, lob it into the face of shotgun-wielding barman, run over and grab his gun, blast him in the chest, spin round, throw the gun into the onrushing goon, grab his dropped pistol, and… well you get the picture. It looks cool in white and red, but in your head it looks so much cooler.

We’ve known about Superhot for some time, but on its actual retail release it’s no less exciting and innovative than it was over two years ago. Sometimes games just feel right, and Superhot is such a game. It takes something familiar and turns it on its head to create what I expect will become an indie classic.

Sometimes games just feel right, and Superhot is such a game. It takes something familiar and turns it on its head to create what I expect will become an indie classic.
9 Stylish Exciting Unique Campaign is brief