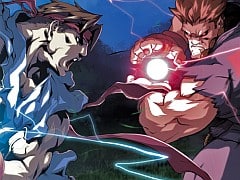 At first glance, the answer is a whole-hearted yes, and that’s because the graphical upgrade is so striking, so shiny and crisp that you can’t help but admire Udon’s comic-book-style redrawn art. Anyone who’s been paying attention to Capcom’s drip-feed of assets will know what to expect – dark outlines, stark colours, beefy limbs, gorgeous backgrounds, revised, canon correct endings – Udon hasn’t just given Super Street Fighter II Turbo an HD anime lick of paint, but chucked the whole pot on.

Cammie’s England stage, with Northern Lights intact, is a highlight. Chun-Li’s China stage, complete with chicken wringing bloke, stands out, and Sagat’s Thailand stage looks like a work of art, but there are one or two missed opportunities. Fei Long’s Hong Kong stage is as static as ever and Dhalsim’s trumpeting elephants are quite possibly even more annoying than before.

As it should be though, the characters steal the HD show. Zangief’s bulging biceps look brilliant, as do Guile’s, and the bosses – Balrog, Vega, Sagat and M. Bison – are all upgraded for the better. HD Remix will leave no fan wanting in the graphics department. It’s gorgeous, slick and, put simply, the best-looking Street Fighter game ever released on home consoles.

There were concerns that Udon’s work would play havoc with the hit boxes that have stood the Street Fighter series in such good stead for 17 years. Well it hasn’t. HD Remix, essentially, plays just like SSF2T did back in the day. Everything works just the way it should – the pace, the feel, the incredible control and perfect collision detection – it’s all there, confidently in place even after all this time. If you’re one of those lapsed Street Fighter players who hammered the SNES and Mega Drive d-pads till their thumbs bled back in the mid 90s, then, like riding a bike, everything will come flooding back to you in a wave of d-pad nostalgia.

First it’s quarter-circle forward fireballs, or charge back then forward projectiles. Then, without knowing it, it’s Dragon Punches, and Flash Kicks, and even three hit combos. And then somehow you’re stringing six, seven, eight hit combos and finishing opponents with Supers before you can say Hadouken.

You’ll find almost every character’s more difficult moves have been tweaked so that they’re slightly easier to do. Ryu’s Super is now two fireballs and a single punch. Even Zangief’s classic health bar destroying Spinning Piledriver, what was a 270 degree spin and a punch, is now half circle back, forward and punch or half circle forward, back and punch.

Sirlin’s design philosophy is this: Street Fighter II should be more about anticipation, quick reflexes and good decision making than being able to input incredibly complex commands on demand. While this is certainly an admirable ideal, and, actually, a reality since HD Remix does level the playing field somewhat (experts can perform special moves at will anyway), it’s still a relatively hardcore fighting game that’s unlikely to attract anyone who hasn’t dabbled in Street Fighter II before. This is no Mortal Kombat VS DC Universe.

While most people won’t notice any difference beyond the graphical and audio, purists will feel that HD Remix is a completely new Street Fighter game and worthy of being called the sixth true iteration of Street Fighter II, and that’s because Sirlin has also rebalanced the game so that lower tier characters have more of a chance and upper tier characters are less overpowered. These changes are of much greater importance to hardcore Street Fighter players than the fact that less skilled players will find special moves easier to pull off, and will be the first thing they explore once the game is in their sweaty hands.

We haven’t got enough room to detail every single rebalance change that has been included in the game (you’ll find a complete change list over at Sirlin’s site), but we will detail some of the headline changes. They’re basically divided up into two categories – buffs and nerfs. First, the buffs: Ryu players will notice he’s now got a fake fireball – quarter circle forward and short, which is absolutely brilliant for faking your opponent out and making them jump. Guile’s roundhouse Flash Kick now travels forwards and up rather than straight up, making it great for hitting retreating enemies, AND his Upside Down kick hits as an overhead AND it can be used from any distance by pressing forward and roundhouse, making it great for giving him some offensive potential. Honda is now dangerous against projectile characters, given that his jab Torpedo goes through fireballs, and Chun-Li’s classic Spinning Bird Kick has a new up down arc that helps her get out of tight corners and travels over fireballs.

Now, the nerfs. Dhalsim, considered by many to be the best character in Super Turbo, has had the obscene range of his Noogie shortened and his ducking ranged punches no longer go under Guile’s Sonic Booms. Balrog’s throw range has been reduced, but he’s still incredible, and Sagat (based on New Sagat) has had his fireball recovery slowed so that it’s similar to Ryu’s, which means that annoying Tiger Tiger Tiger players are going to have to think of some new strategies.

Sirlin believes that the best characters should be toned down slightly and that the worst characters should be toned up slightly so that everyone meets somewhere in the middle and the game, as a result, is more balanced. This hasn’t quite been achieved – Dhalsim and Balrog are still the two best characters and T. Hawk and Fei Long are still the two worst – but the roster has been scrunched somewhat, and that’s undoubtedly a good thing.

Still, there will be some who hate every balance change, tweak and even the new HD graphics. If that sounds like you, fear not, the original SSF2T is included untouched in the form of the Classic Arcade mode. Brilliantly, you can mix and match the original graphics and the new graphics with the HD Remix and Classic Arcade modes in any combination. You can even delve deep into the minutia of the balance changes in an extensive Dip Switch editing mode if you want to get your hands really dirty. This, coupled with a training mode that displays hit boxes for each character, gives HD Remix an extremely hardcore edge more casual fighting game fans probably won’t even notice.

The graphics and the gameplay aren’t the only things that have been remixed, the audio has also been revamped. Every classic Street Fighter track has been given the once over by OverClocked ReMix, a community of game fans that specialises in remixing game music. The results are hit and miss. The title screen music and Ken’s guitar solo stage have been given a hard rock boost for the better, and Chun-Li’s chirpy whistle-friendly melody has been brought into the modern age with aplomb, but then Dee Jay’s Jamaica music sounds like it belongs in an elevator, Balrog’s Las Vegas music sounds like it belongs in a lounge and Vega’s Spain music sounds like it belongs on a J-Lo record. But hey, like with the HD graphics, you can play with the original music if you want, so it’s hard to complain.

More essential to nail from Capcom’s point of view than everything else was providing a solid online experience, and it’s here that HD Remix excels. We’ve experienced pretty much zero lag in most of the games we played online (on the Xbox LIVE version) which is absolutely brilliant. Capcom’s Street Fighter II’ Hyper Fighting was roundly criticised for providing awful online play, although it improved over time. Lessons have clearly been learned, indeed much of the wait for the game has been down to Capcom refining the quality of the online experience with tweaks and feedback from a beta. You’re bound to run into the odd opponent with a bad connection, which will result in lag and teleportation, but this is the same for every online game ever released. Fingers crossed Street Fighter IV online is equally robust. We experienced a few games where the character names and health bars were just messed up. Not sure about that one, but leaving the party and joining again fixed the problem.

As far as online features go, HD Remix is brilliant. You’ve got standard ranked and unranked matches with up to four spectators, as well as an eight-player knock out tournament mode, which is great if you’ve got some Street Fighter II players on your friends list. Even better than this though is the implementation of double-blind character selection. For the uninitiated, one of the worst things about playing fighting games online is that there’s nothing to stop someone from waiting as long as they can to see who you’re going to pick so that they can pick the character that works best against them. In HD Remix you can’t see who your opponent is selecting, so you may as well go ahead and pick your character straight away. It’s a simple solution, wonderfully implemented, and from this day forward is a feature that must be included in all future fighting games. And, crucially, there is a timer in the selection screen, which wipes out a repeat of the griefing experienced in Hyper Fighting where people simply put the controller down and waited for you to quit, granting them a win and you a disconnect.

All of the changes, all of the tweaks, all of the graphical upgrades, remixed music and refinements to the online experience make SSF2THDR one of the best remakes of a classic game in recent memory. Despite efforts to make it more accessible, it’s clearly been designed for the hordes of Street Fighter fanatics that still pump hours into refining their combos and honing their strategies nearly 20 years after the first Street Fighter II game came out. This is one for the fans, and fans will absolutely love it. Take a bow Mr. Sirlin. You done good.

The only question that remains is what version to pick up. For those of you who have an arcade stick of some description, it won’t matter, but for those of you who don’t, we’ll recommend the PS3 version, since the d-pad on the Sixaxis is miles better than the Xbox 360 pad (and only a little bit better than the new green 360 pad). It really is worth scouring the nations shops for a stick though, even if this is the only fighter you’re going to buy all year.

This is one for the fans, and fans will absolutely love it.
9 Clever rebalancing Tight online play Brilliant gameplay Lovely graphics