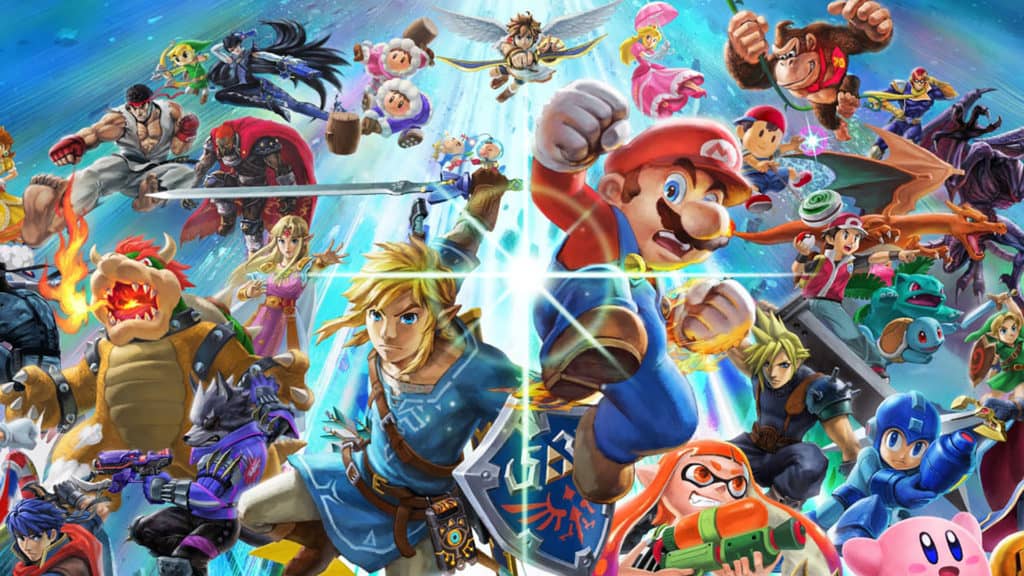 In these times of Uber and Deliveroo, and the culture of wanting everything right now, immediately and without delay, Super Smash Bros. Ultimate serves as something entirely antithetical. It makes you savour the moment without pining for more; you start with eight characters, and unlock the other several dozen by actually playing the game. Imagine that! No fighting game has been brave enough to do such a thing in some time; normally you can count on having an almost complete roster of characters out of the box.

That this works in Super Smash Bros. Ultimate’s favour is testament to how enjoyable the process of unlocking characters is, and in every one of the game’s modes, there’s an opportunity to add a new challenger to your roster. Promoting dalliances in every facet of Nintendo’s exemplary party-style beat ’em up, earning new fighters is a reward for progressing through the involving Spirits Adventure mode or by enjoying a quick match in the various Smash game types. Not only has Ninty stuffed Smash Bros. on Switch to bursting point with characters and stages, but there’s a wealth of content, too.

First port of call is Smash mode, where you’ll find your conventional, but no less fantastic 1v1 match-ups, as well as the excellent Squad Strike for 3v3 or 5v5 elimination battles, and the ever-present tournament knockout mode. Special Smash punch-ups are where it’s at, though, enabling you to play your very own custom matches with giant or tiny characters, at fast or slow speed, breathing curry fire, with a metal body or whatever you desire. Or you can work your way through the roster in Smashdown or enjoy a quick sudden death showdown. There’s more exciting punch-ups to be had in Classic Mode, Training and the endurance challenge of Mob Smash modes (Century Smash against 100 opponents, All-Star Smash against all fighters, and Cruel Smash against the toughest foes) that pit you against a succession of challengers in a fight for survival. There. Is. A. Lot. 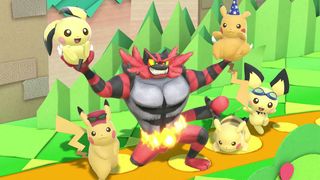 All of this is only scratching the surface, however, as the Spirits Adventure hides away hours of wanton brawling with a delightful smidgen of RPG depth thrown in for good measure. Each victory brings with it new spirit characters and support spirits, all of whom fight at your side (figuratively) once defeated, granting your main a selection of perks. Think of these as gear that you can equip, arming you with helpful buffs for the ensuing head-to-head. Some fights also bring certain conditions to the table that you’ll need to take into account, whether it’s reversed controls, a slippery or lava-covered floor, a stage that flips upside-down at random intervals, or opponents with boosted stats or vitality, diversifying each encounter. Arming yourself with the right spirits is vital to combat these conditions, although you can have the game auto-pick a loadout for you if you can’t be arsed.

There’s a story of sorts here, too, wherein all 70-odd characters are captured, their spirits removed and placed in sinister, red-eyed vessels. Each of these enslaved challengers is marked in certain locations across an expansive game map, which you can navigate via any number of different routes. It can be a bit of a grind at times because you’re fighting the same characters over and over, but ultimately, Spirits Adventure is a rewarding jaunt, featuring little side activities like pumping up your spirits at the gym, or sending them into caves or ruins for a spot of exploration to dig up bonus items, like snacks to feed your spirits and level ‘em up faster. It comprises countless stages, and is one of the best ways to unlock characters for the roster that are subsequently playable across all modes. Elsewhere, characters are obtained through reaching certain milestones, that event in a new foe appearing from out of the ether to challenge you. Defeat said foe and you’ll acquire the new character, and unlike previous Smash Bros. games, a loss in these scenarios isn’t quite so devastating, because you can initiate your rematch clause instantly from the Games & More menu. Phew.

Of course, a raft of options and a million characters doesn’t mean much if the game itself is a load of old cobblers, and unsurprisingly, Super Smash. Bros Ultimate is every bit as joyful and gratifying as its forebears. An exuberant, always frantic and fun arcade brawler, Super Smash Bros. Ultimate cements the series as a Nintendo essential. Accessible enough for a casual button-mashing session with a friend, but intricate enough to require mastery, Super Smash Bros. Ultimate is in a class of its own, even if the Joy-Con’s tiny little buttons aren’t exactly ideal for this sort of thing (grab yourself a GameCube or Pro Controller if you can). 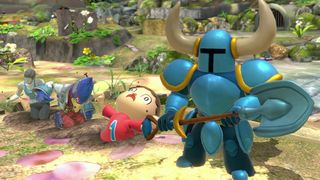 A celebration of each and every one of its characters, the attention to detail and knowing nods to its raft of guest stars is nothing short of exemplary. You need only play on the Metal Gear Shadow Moses stage, Bayonetta’s Umbra Clock Tower, Ryu’s Suzaku Castle, or the interactive Wario Ware backdrop to see how much fun’s been had in making Super Smash. Bros Ultimate the definitive Smash. The roster will bring a smile to even the most hard-hearted cynic. Every square-inch of Ultimate features unparalleled fan service, and has clearly been treated as a labour of love; Solid Snake is given as much care as Mario, Peach, Link, or Kirby. It’s impossible not to be completely intoxicated by the whole thing.

Online, meanwhile, Smash Bros. is a bit on the laggy side, which doesn’t exactly provide the perfect parameters for the game’s inherent fast pace and kinetic nature. Clearly, improvements need to be made to make online battling as smooth as it needs to be, because in its current state (at time of writing), it’s not really up to snuff. Matchmaking is messy too, taking a bit too long, with no guarantees that the options and rules you’ve chosen will appear correctly. Harumph. You’re better off sticking with local offline play until Nintendo gets the myriad issues with Ultimate’s online sorted out.

A vibrant riot of colour and merriment, Super Smash Bros. Ultimate is a wondrous ode to fighting games, with an eclectic and varied cast of characters, more modes than you can shake a Joy-Con at, and a raw, infectious sense of fun. Granted, it can be confusing when there are multiple character on-screen at once (especially in handheld mode, where it can get a bit squinty), with power-ups whizzing around and what not, but there’s nothing else like Super Smash Bros. Ultimate on Switch. Wing your other copies of Smash in the bin. You don’t need them anymore. Ultimate is inarguably the greatest Smash Bros. game of all time. End of, mate. 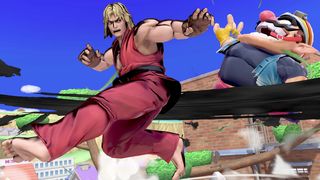 The definitive Super Smash Bros. game, Ultimate is not only a pure and unadulterated joy, but also a fantastic fighting game stuffed to the gills with characters and other content. A little smasher.
9 Loads of characters, stages and modes Frantic and fun fighting action Fan service is incomparable Online is a bit of a mess