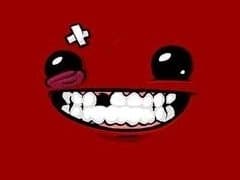 Super Meat Boy is one of the reasons I play video games. It’s bright, huge, colourful, funny and painfully annoying.

This retro-revival darling immediately strikes a chord with anyone who can remember the early 90s, when platformers were king and the idea of a mid-mission checkpoint was entirely alien. You control a friendly-looking wad of meat and shuffle around hundreds of – if we’re being painfully honest – increasingly evil levels.

The game is beautifully indicative of a generational shift in designers, too. We’re all used to developers reviving their 80s childhoods (Geometry Wars, for instance) but Team Meat is fondly harkening back to their youths spent playing 16-bit consoles; even the title screen riffs on Street Fighter II’s now-iconic opening, and not-so-secret ‘warp zones’ catapult you into ostensibly vintage homages of yesteryear. Super Meat Boy feels like my childhood but all growed up.

Each level is themed around one the oldest tenets of video game design – “the princess is in another castle”. You need to rescue your girlfriend, Bandage Girl, from the nefarious clutches of Dr Fetus. Every time you catch up to her, at the end of each level, she’s snatched away once more. And so on, and so on.

But Super Meat Boy is buggeringly hard. At times it’ll make you feel like jamming your controller prongs into your eyes as a way of releasing all the pent-up agony coiled inside your head. It routinely reduces me down to a weak, fragile husk, pushing some of my more obvious gaming tics to the foreground: I tend to compulsively take a sip of my drink whenever I die, for instance. Which means about half an hour of Super Meat Boy transforms me into a human water balloon.

Happiness is derived from these frustrations, not in spite of them. That’s one of the reasons why Super Meat Boy is so good, and why it recalls that same giddiness of when I first, say, unwrapped a SEGA Master System II for Christmas.

Controls are sensitive but not finickity, requiring only two buttons (jump and spring) and the analogue stick. Sensitivity is high, and the bracing speed and immediacy of the levels is enough to put even Sonic to shame. Push hard in one direction and Meat Boy will dart spritely across the screen, probably face first into a giant saw blade. Or a mound of salt. Or a pile of needles, or – well, you get the idea.

Sensitivity does not equate to imprecision. Each platform, trap, spike and chasm feels like it’s been tweaked to remain perfectly fair, with seemingly impossible challenges becoming a laughable doddle after enough time spent learning the nooks and crannies of the environment. Juicy splotches are also left on surfaces after Meat Boy runs over them – and stay there as you make your inevitable repeat attempts – which function as both a neat aesthetic touch and a permanent marker of your progress.

Perseverance is met with eventual victory, and an accompanying wave of euphoria. The staccato and varied pacing helps to create a series of miniature piecemeal adventures, and you’ll often end up in situations where you bang out five levels first try after spending twenty minutes failing on the one that came before. Difficulty spikes rather than curves, though the overall effect is always satisfying – like the range you get from a nice bag of pick ‘n’ mix.

The pleasing cycle of delight, despair, anger and persistence carries on for hundreds of levels – the designers claim there are more than 300, but in reality the game repeats itself with harder ‘dark world’ challenges of prior areas. These are modified just enough, however, to make them feel like an entirely new rage-inducing treat.

Bonus unlockables, garnered from collecting hard-to-reach (note: understatement of the year) bandages scattered around the level, include the option to play as, amongst others, a Castle Crasher or the guy from Braid. The changes are more than cosmetic too, with each character having their own special ability.

Team Meat is essentially reviving age-old design tactics for a modern audience, but it would be impossible to accuse them of an inability to be forward-thinking. Taking a page out of the retail market of the App Store, the game is launching on sale at 800 points (until November) and new, free content will be supplied over the coming months. This tactic has worked wonders for the likes of Angry Birds and Doodle Jump, and it’ll be very interesting to see if it manages to take off on other platforms.

Of course, Super Meat Boy might not be for you: it’s highly likely you switched off when I wrote ‘buggeringly hard’ a few paragraphs ago. Super Meat Boy taps into the exact kind of things I want from a video game – it’s bold, challenging and, above all, rewarding. I can certainly understand how people might not be attracted to a game that takes a sadistic delight in coming up with inventive ways to frustrate players, but you’d be missing out if you let Super Meat Boy pass you by.