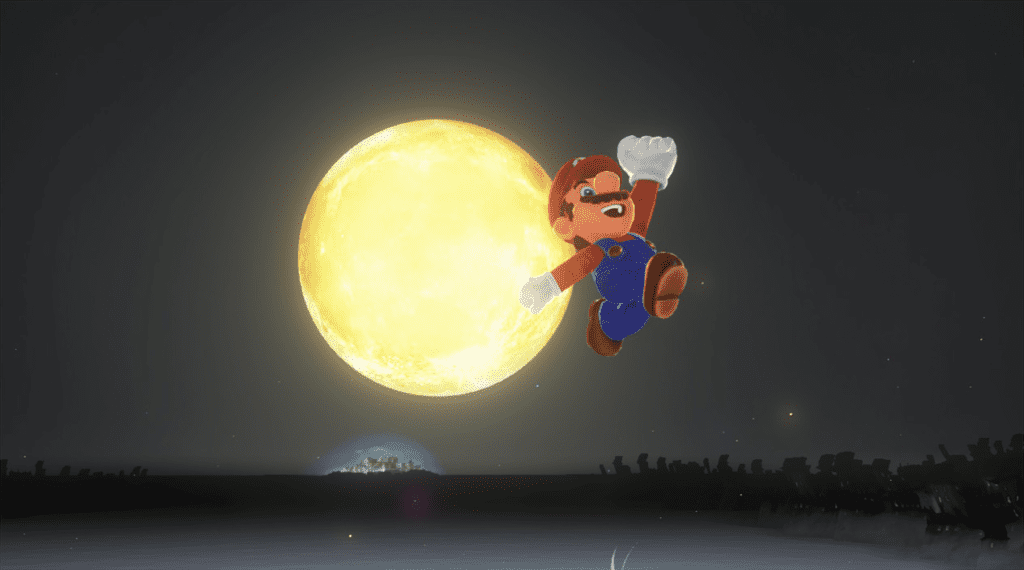 One must evolve to maintain longevity. Nintendo has been mindful of that when it comes to the mustachioed fella in the red hat. Whether he’s been strolling around planets without fear of falling off, or made to channel his inner Selina Kyle and climb up walls dressed like a cat, reinvention has made Mario’s adventures feel unique over the past few decades, and Odyssey is no different. But rather than a raft of tools at your disposal, you just have the one this time: Cappy.

Mario’s famous peaked cap is in tatters after a tussle with arch nemesis, and Princess Peach’s new fiancé, Bowser. With his bonce cold and lacking his first initial, a down-and-out Mario ends up in a land of sentient headwear — by no means the weirdest thing in Super Mario Odyssey — and discovers that one of these floating noodle pullovers has a vested interest in stopping the king koopa’s marriage to his reluctant bride-to-be, too. Mario welcomes the aptly named Cappy atop his dome, and they begin their journey to put an end to the loveless relationship, visiting all manner of elaborate environments along the way.

Meanwhile, Bowser and his colony of wedding planners have decided to fly around to all the different Kingdoms in the world, thieving a number of important marital paraphernalia, such as a dress and a ring, to make this marriage Hello magazine-worthy. The comforting beats and sweet gags feel like home, making the astonishing ending more impactful than most things we’ve seen in any previous Jumpman affair. But, without getting into that for fear of spoilers, you generally know what to expect from a Mario game; you’ve played one or two before. You haven’t played one as a Goomba, though, have you? Or a Hammer Bro for that matter. 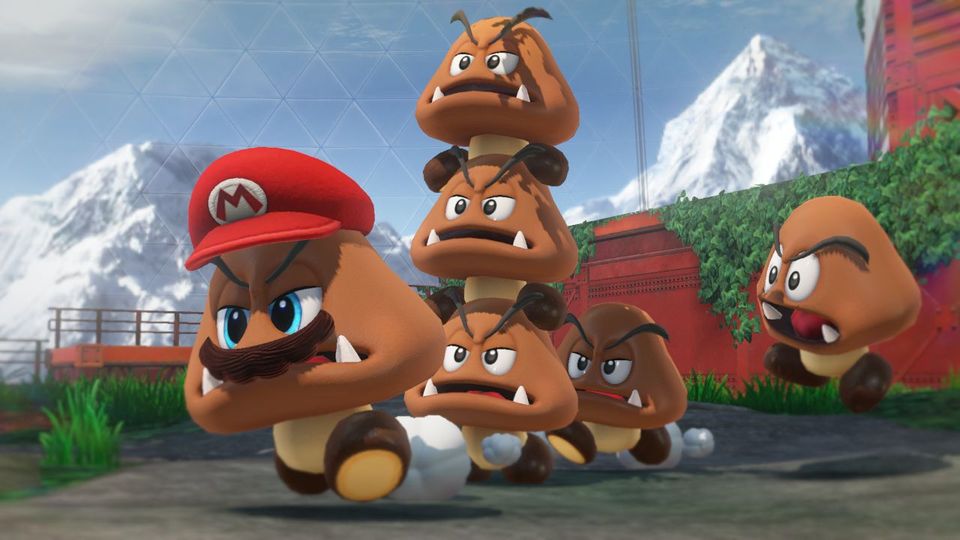 Cappy is the Swiss Army Knife of allies. Sometimes they’ll act as an extra platform for you to use when leaping across a giant chasm, but they’re also not averse to being flung into the unsuspecting face of an adversary to deal damage. Yet, the fabric’d helmet’s greatest trick is that Mario can hurl it in the direction of some 50 odd enemies and objects in the game, and transform into a facial-haired representation of them, inheriting their abilities and look. Figuring out what you can capture involves guesswork as it’s never explicitly stated who or what is capturable, but that’s half the fun. Strutting around the busy New Donk City and firing Cappy at a pole, and then discovering that you are now said pole, is just glorious. Certain enemies are there to pose a challenge rather than provide your spirit with a new vehicle, so identifying a new conduit is never not surprising.

While Lake Kingdom’s seaweed might only be there to make your life more difficult, Cheep Cheeps are the underwater vessel of choice, and make the drink explorable without you having to worry about air bubbles. The Paragoombas give you the opportunity to fly around the foggy Cap Kingdom, and land on the otherwise unreachable platforms scattered throughout. Become a Gushen and propel yourself through the postcard-worthy Seaside Kingdom, as long as you make sure not to run out of water. New things you control can add their own method of traversal like the long-limbed Uproots of Wooded Kingdom, or unearth a previously hidden layer in your surroundings like the stoney Moe-Eyes of Sand Kingdom. It’s incredible that it never gets old, quite honestly.

Mario’s a nimble lad, though, and if you’re good enough there are plenty of moments to relegate Cappy to mere fashion accessory status, rather than God-like headpiece. Super Mario Odyssey is inviting and allows anyone familiar with this type of setup to run around to their heart’s content, scooping up coins like Scrooge McDuck, but mastering the controls of the dungarees-loving one makes everything sing. A distant patch of ground may seem impossible to reach at first, and likely is if you saunter over to the edge and lazily leap into the abyss. However, chaining Mario’s hops, skips, and jumps together opens up a world of possibilities. Approach that same ravine by rolling into it at a ferocious speed, long jump at the last possible second and dive before gravity takes you, and you may find yourself safely on the other side. As mentioned above, Cappy is also useful for getting around, too, as Mario can throw the cognisant cap in front of him, and bounce off it for added height. It definitely takes a bit of getting used to, but once you nail a multi-faceted move, it is pure joy. Not being the most skilled at Odyssey won’t hamper your experience, but it’s worth your while getting to grips with these actions, if only to get around these vast levels more swiftly. 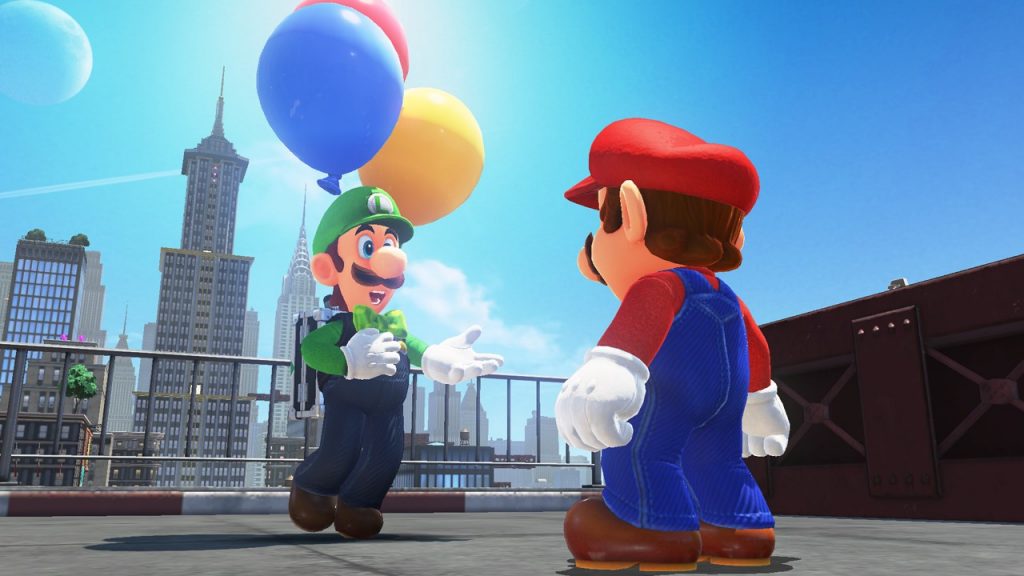 Rolling is one action that’s paramount, quite frankly. While you can fast travel to any checkpoint you’ve passed, Super Mario Odyssey’s stages skew big. Some rely on verticality such as the climbable skyscraper-filled Metro Kingdom, and there are those that are more condensed like the caveman-inspired Cascade Kingdom, but they’re all pretty sizable. Most also have pre- and post-boss states that will open up different areas for you to probe. Often after defeating the big bad at the end of a level, you’ll spot a warp pipe that wasn’t there before, or a now accessible doorway. You’re encouraged to examine every nook and cranny in search of Moons to power your airship and travel to the next world. And my God, there are a lot of them.

After landing on a new Kingdom, you’ll be required to collect a set number of Moons before jetting off to the next area; it’s never an unsurmountable figure and can generally be acquired via a base level of searching, and by defeating the stage’s bosses. A portion of the Moons are only attainable after you’ve seen the credits, as well, pushing you to revisit Kingdoms and clean them out after you’ve finished the game. And that’s more than fine, because spending as much time as you can in these magical areas, inspecting every corner of the map, is a pleasure. In all likelihood you won’t see everything Super Mario Odyssey has to offer, because of how full these Kingdoms are. Secret rooms, concealed pathways, mini-games, a plethora of outfits to collect, and tear-inducing nods to the past all ensure you’re rarely looking to fill your time. You just lose time, wrapped up in what Nintendo has created. 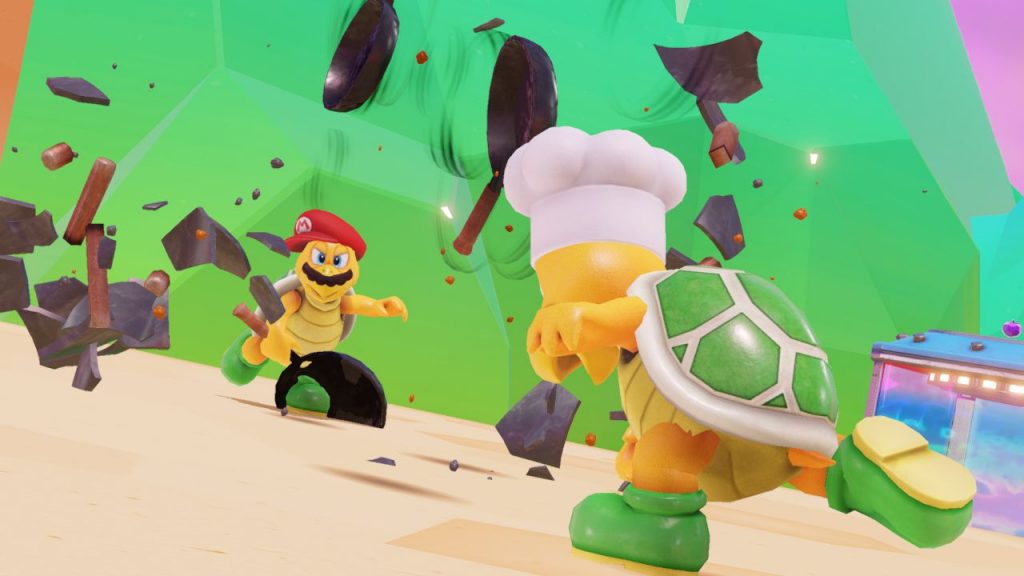 Musically, it’s unmistakably cheerful with an orchestral sound that would make most conductors blush, offers a brief respite with some delicate strings on occasion, and has even made room for some surf guitar. These delights, importantly, don’t drown out the ambient noise in each world, though, and you can take pleasure in the moments that Nintendo has allowed to breath, too. The soundtrack isn’t constant, meaning there are times where the natural tones of the world are more prominent, which allow you to both miss the gleeful soundtrack, and also enjoy Mario’s crunching footsteps in the sun-drenched sand, or the swaying of tree branches in a gentle wind.

While you’ll grab the right amount of fuel for your ship and see what each Kingdom has to offer quite handily, Super Mario Odyssey comes alive if you cover every single blade of grass — you might find a warp pipe that leads to one of the excellent 2D areas, an up-to-that-point uncaptured capturable, a skipping mini-game, a Koopa race, or even a Moon. You’re ushered along in the right direction, but relish in going off the beaten path and you’ll be rewarded for doing so. It’s rarely daunting, always surprising, and a true modern day masterpiece.

It's extraordinary, really, that after all this time a new Mario game can feel as fresh as any that preceded it. Cappy is a revelation, exploring Kingdoms is bliss, and Super Mario Odyssey is a masterpiece.
10 Exploration is constantly rewarded Kingdom layouts are exceptional Mario's fluid movement The result of capturing something surprises throughout