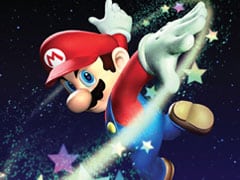 A true new Super Mario game is something we don’t get all that often – in recent years it’s been one per console. When that game finally does arrive, as is the case with Super Mario Galaxy on the Wii, it’s all too easy to get carried away. Anyone who’s been playing games for 10 years or more will have fond memories of Super Mario 64, a game that defined 3D games for the generations to follow. But what is left for Mario to wow with?

Let me get this out of the way first: In my opinion Super Mario Galaxy is hands-down the best ‘game’ available for the Wii. It’s a true gamer’s game and doesn’t give in to modern temptation to be edgy or crude. This is Mario as you remember him: the world is bright and colourful, the music is twee, the jumping is precise and the stars are plentiful. If you want a reason to buy a Wii after turning your nose up at the plethora of mini-game collections and novelty titles, this is it. What it isn’t is the greatest game ever made or gaming perfection.

For Mario fans Nintendo has delivered the goods, with a game that is nostalgic in the extreme, capturing what made Mario 64 so good and tweaking it where it needed work. Platformers like this aren’t made any more, with modern games almost all dependent on a strong storyline and character development. While Mario’s reluctance to follow trends will no doubt be commended by hardcore Nintendo devotees, for me Galaxy feels ever so slightly dated – although that isn’t necessarily a bad thing.

As ever in a Mario game, your goal is to rescue Princess Peach. She can’t seem to get a break, once again falling into the hands of Mario’s nemesis Bowser. This time he captures her castle, before jetting off into space with it. Mario of course goes along for the ride, but ends up on a malfunctioning space station. As luck would have it, all that’s needed is power stars, which will power the flying structure, allowing Mario to find Peach and rescue her from Bowser’s clutches.

This travelling space station, home to star creatures known as Lumas, becomes your hub, as the castle was in Mario 64, with numerous rooms acting as gateways to solar systems. Each solar system has a set of galaxies (essentially a themed area) and each galaxy has a number of stars. Each star is in effect a new level, with the star chosen determining what path you take when you land on the planet. It sounds a tad complicated, but it’s far from it, with the structure being all too familiar to long-time Mario fans. After a while the travel from one gateway to another gets a little tedious, but it will at least give you a chance to practice your triple jumps.

Core to Galaxy is the role of gravity. While many levels look and play similarly to those in previous 3D Mario platformers (albeit seemingly floating in space), numerous levels feature what can only be described as mini planets. Usually, rather than having anything meaningful on them, they serve as platforms, with Mario able to leap from one to the other, breaking the first’s gravitational field and entering the other’s. Because they’re little planets you can also walk around them, which makes for some interesting upside-down gameplay and a fair few mini-puzzles. Elsewhere gravity is played with more creatively, but only on occasion did it feel like a truly breathtaking addition to the gameplay.

It’s not all peachy though. Camera problems have blighted 3D platformers since their inception and while Mario Galaxy fairs better than many, it comes unstuck a few too many times. Small planets often cause the most problems, with your line of sight being little more than a few inches in front of your character. You also suffer moments where the camera will move on its own accord, causing your path to change and, if you’re unlucky, a plummet to your death. You get a silhouette of Mario if he passes behind an object, but this simply doesn’t cut it when you’re walking along treacherous platforms.

The swimming levels are by far the worst though, with the camera out of your control entirely and the view of the action never ideal. It doesn’t help that Mario swims like a weak child, but at least the freely available shells serve to propel him along at a faster rate of knots if you manage to pick one up. I’ll reiterate that the camera is the best yet in a 3D Mario game, but the inability to manually control the camera (as you could have done with a second analogue stick) really hurts at times. You can flick it around from side to side fairly crudely using the Wii-mote d-pad (if you’re in an area that allows it) but it’s far from the perfect solution.

Camera problems aside, the game is generally a delight, with many of the levels being some of the most interesting Nintendo has created in years. You’ll also be able to fire star bits at enemies, aiming using the Wii-mote, and a second player can opt to carry out these duties for you. Given that the A button on Player 2’s Wii-mote isn’t being used to make Mario jump, the second player can use it to interact with things, holding up enemies to help Mario out.

Galaxy doesn’t have a single gimmick (as Sunshine did with FLUDD), but it does consistently mix up gameplay through the introduction of special power-ups. During the game Mario will become a bee, move within a spring, walk on fire and water as an ice man, fly like Superman, become a ghost and throw fire. Other than the rather terrible levels that require the spring power-up, these are all great additions to the game, with the bee sections in particular offering a nice change of pace.

Little touches are seen throughout, which go to highlight the care and attention Nintendo has put into the game. The most significant is how the controls work. It might seem like a given, but when so many Wii games fail to walk the line between gimmick and gameplay, Galaxy’s impeccable use of the Wii-mote and Nunchuck is worth shouting about. From the simplicity of the Wii-mote shake to make Mario spin and the mid-air shake that gives you an extra few moments of air-time when you need it, to the instinctive star bit collection using the Wii-mote, it just feels right.

When walking on ice a flick of the Remote causes Mario to start skating, with jumps from then on causing him to pirouette like a trained skater. As Ice Mario you can jump up waterfalls – something you’re never told you can do. At times the game is a joy, with the visuals making a mockery of most Wii efforts and Nintendo’s decision to use a full orchestral soundtrack an inspired one. For a handful of levels Mario Galaxy is pure gaming at its best.

Bosses also crop up frequently, although one of the most adorable is tackled early on. The most visually impressive is also fought during the first quarter of the game, in your first encounter with Bowser Jnr. The later bosses are tougher but they just don’t have the charm of these two highlights. It doesn’t help that your main enemy, Bowser, is fought in practically the same way in each of your encounters with him, and these bouts seem sadly lacking in creativity when held up against the more diverse enemies.

60 stars is all it takes to activate the final confrontation, although getting this far will take far longer than your average modern video game. Add in all the stars from uncompleted galaxies and the optional stars activated by the red and green lumas, and you have a game that could take in excess of 30 hours to complete. It’s worth it too, with a nice reward given to all players who manage to obtain all 120 stars.

There’s just something missing though. As charming as Galaxy is, its ageing roots are clear to see. Adults reminiscing of times gone by will no doubt be captivated throughout, but unless you get all the little references to Nintendo games of the past, the lack of a compelling story and the game’s lack of cohesiveness could leave you wanting.

In the hands of anyone who’s been longing for a true sequel to Mario 64, Super Mario Galaxy could well be the game of the year, but for me the latter half struggles to match the creativity and moments of magic experienced during the opening. It’s tough, perhaps too tough for novices, yet its bedtime story-like charm is unlikely to appeal to players who have been spending the last ten years playing Halo, Tomb Raider and Final Fantasy. While Mario 64 did things no gamer has seen before, Galaxy simply builds on this template. It’s certainly a better than game Mario 64, but nowhere near as revolutionary.

In the hands of anyone who's been longing for a true sequel to Mario 64, Super Mario Galaxy could well be the game of the year, but it's nowhere near as revolutionary as Mario 64.
9 Wonderful music Some stunning art design Swimming and camera trouble Feels slightly dated

Mario takes to the skies in Super Mario Galaxy, his first outing…

Mario takes to the skies in Super Mario Galaxy, his first outing…