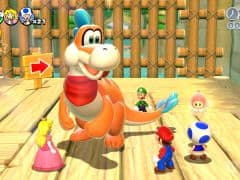 A major and fair criticism of recent Mario games has been their inclination to keep things rather familiar. Whereas Galaxy introduced new ideas, the likes of New Super Mario Bros U felt like extensions of what had come before – retreads, almost. Super Mario 3D World is Nintendo’s answer to that.

Instead of forming the game’s core around one idea, 3D World decides instead to continually throw new ones at you. Arguably the most varied Mario platfomer in years, the start of every level is met with a sense of anticipation as you wait to see what’s next. Recognisable trends are certainly in place, and it keeps its style in tune with the 3DS equivalent, but it never falls into a pattern.

It’s a wonderful technique, and used near perfectly throughout 3D World. I can’t think of a single level that wasn’t entertaining in some way – the sheer ingenuity that Nintendo has introduced is, on occasion, nothing short of genius. From stages that feature a jump-less Toad, to smaller, timed obstacle courses, you’re never sure what to expect. A case in point is the last boss, potentially the funniest in the franchise’s history.

The real question, then, is how this all translates in terms of challenge. I could guarantee that 3D World will make you smile for almost the game’s entirety, and I’d be fairly confident that most will also be surprised by how difficult events become. It doesn’t show its teeth until its later stages, but Mario’s return to the Wii U has some unbelievably tough tests that often end with the thought of hurling the GamePad across the room. It’s a welcome, almost forgotten hurdle, though, reminding you that when Nintendo wants to turn it on, it can do so effortlessly.

With a secret world so good it’ll make long-term fans (and me) squeal with glee, and how easily it oozes personality and skill, Super Mario 3D World is the best entry the series has offered up in years. It may not hit the highest of highs that the plumber has done in the past, but it’s awfully close.

The game that deserves to sell Wii Us the world over...
9 Co-op is on-hand to make it even more fun. Funny, charming, wonderful, lovely, addictive, beautiful... Wonderfully entertaining from start to finish. Is incredibly intelligent and varied.