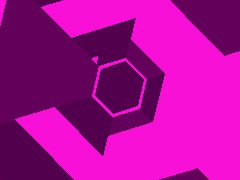 Super Hexagon started life as a Flash game simply titled Hexagon, thrown together in less than a day by prolific indie developer Terry Cavanagh for Pirate Kart V, an anarchic attempt to collect hundreds of ornate miniature games into a single launcher, most notably as an entry into the IGF awards. Super Hexagon burst out of those limitations, got extended and jazzed up and is now available as a universal app for iOS.

It’s unsurprising, given its roots, that playing Super Hexagon is simple: you control a tiny triangle, perched at the edge of a hexagon in the middle of a 2D playing field. Your task is to avoid the obstacles that hurtle towards the centre for as long as possible. Obstacles repeat but levels are randomised each time. The game starts about as quickly as level 20 in Tetris and only gets faster.

The new version’s first level is about as hard as the only level in Hexagon. The other five levels are faster, with more complex patterns of obstacles, and your movement speed is adjusted (or sometimes isn’t) accordingly. In fact, most of the tweaks Cavanagh has made add to the difficulty in one way or another. The central hexagon can now change, with little warning, into a pentagon or a square, which changes the obstacles and how you approach them. To move you need to touch the side of the screen that corresponds to the direction you want to turn. Analogue controls might seem more intuitive, but this method means that you’ll quickly learn how long to hold a direction in order to rotate a certain angle, accurately finding the gap you need to squeeze through.

Technically endless, each level is ‘complete’ when you stay alive for 60 seconds. You’ll level up at certain times along the way, going from point to line to triangle and so on, until you reach the magical hexagon at the minute mark. There’s no achievement-based meta-game here though, levelling up is simply a way of charting your progress through each level.

If this was all there was to Super Hexagon, it might have ended up an unconvincing test of your reactions, but the game uses music and visual dressing to make the experience much more intense. The soundtrack is pure, high-tempo, Game Boy chip-tune insanity. It uses 8-bit era sound effects, which means that it sounds like an old game that’s been sped up and distorted through a psychedelic haze. What’s brilliant is that it looks like it too. It’s always in motion, for one thing: rotating one way or the other at various speeds, pulsing and shaking wildly in time to the music. Even the colours strobe through a rainbow of neon hues while the image distorts and the game’s playing area seems to tilt below you. In many ways Super Hexagon could be a simplified Rez or Dyad, both games of abstract tunnels and synthesised music.

Personal preference will probably decide whether you see the audiovisual decoration as an aid or a nuisance. You might discover, as I did, that plugging in a pair of headphones allows you to zone out and let the game play you, so to speak. However, I can sympathise with the opposing view: that the sounds and colours themselves are the distraction.

Super Hexagon is hard enough to infuriate, but its competent design makes it inviting as well. This game will invite you to have one more try (taking less than a second to restart), and it’ll invite you to immerse yourself and play instinctively too: for a game like this, that’s the greatest invitation of all.

Super Hexagon is hard enough to infuriate, but its competent design makes it inviting as well.
8 A simple idea executed well Mesmerising visuals and audio A challenge for even the fastest fingers It may be too hard for some

Super Hexagon is a minimal action game by Terry Cavanagh, with music…

Super Hexagon is a minimal action game by Terry Cavanagh, with music…