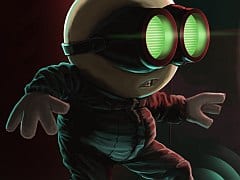 This year has seen a bit of a stealth renaissance, with games like Dishonored and Mark of the Ninja showing how much fun can be had from staying unseen. Stealth Bastard Deluxe, a newfangled version of a cult freeware prototype, arrives as a late-year addition to that roster. It also has the tagline of Tactical Espionage Arsehole, and I’d imagine that fact alone has guaranteed it at least a few sales.

The subtitle exposes developer Curve’s heart and mind, both of which serve as the lifeblood to this puzzle platformer and, coincidentally, plenty of the former is also splattered across the game’s gory walls. What you’re doing here is very much running, jumping and bounding across corridors, ledges and chasms. The twist (and it’s quite clever) is that Stealth Bastard is born in the fixed scrolling cameras, angular geometry and green, blue and yellow hues of Metal Gear Solid’s Soliton radar, so it’s about opportunistically sticking to the shadows, and timing those jumps between marching robot sentries and trigger-happy turrets.

You’re also going to die a lot, because it’s one of those games where you die a lot. You’ll know if you like those by now, and Stealth Bastard manages to carve out its own little niche despite sharing a similar mindset to Edmund McMillen’s genre-defining Super Meat Boy, with both games taking a certain masochistic delight in regularly turning you into a smear of crimson paste.

The key difference here is that most trial-and-error platformers live in the twitch moments of your fingers firing automatically, whereas Stealth Bastard opts for a slightly slower, more considered approach to its action. You’ve generally got enough time to think and plan your actions, but that’s not to say the game doesn’t zip along: levels are over in a minute or two and revolve around activating terminals, which requires holding down a button for a few seconds which feel like minutes.

There are multiple suits for your anonymous clone test subject to unlock, each with their own particular gameplay-changing bonus, but none of these are available on your first, pure trek through this nasty facility. Goggles are your one and only tool, with a traffic light display showing your visibility – when they go red it’s usually a sign that you’ve got a couple of seconds before something tries to kill you. Thankfully this is a game that is well telegraphed, and there’s enough visual feedback in these scenes that you always know why things went so horribly, fatally wrong.

Accompanying your frequent misfortunes is the detached voice of an anonymous watcher, displayed as words illuminating the walls and designed to guide your progress, taunt your failures and celebrate your victories. “Am I a bad teacher?” it asks, as a laser zaps you into paste. These all-knowing, pre-written messages are the equivalent of the alarm bells going off in an episode of QI; the game knows you’re likely to fall into these particular traps, and there’s a strange comfort in the game chiding you for doing so.

Like any and all successful examples of its ilk, Stealth Bastard works because its challenges are neatly sculpted and orchestrated with flair. This is a smart game filled with clever puzzles, and enough checkpointing to alleviate frustrations caused from your frequent and fatal missteps. An initial set of training courses instructs you of the basics – that almost everything in the game is designed to brutally murder you – and forces you to take solace in the comforting cold of shadow.

Such comfort is fleeting, however, and before long the game brings in some blind robot hunters that zero in on the clangs and wallops of some recently introduced noisy floors. That’s the game’s reality, really: everything in the game is designed to brutally murder you.

It’s not always painless. Misery does occasionally linger, especially after you get into loops of slowly sliding the same block for a while before getting obliterated by something nasty. But the downswings are never long enough to creep into the parts of your brain that are quite happily spinning around thinking of how to solve these myriad puzzles. Even after the main batch of tasks has been completed, there’s already a well-stocked selection of devious user-generated puzzles and the option to create and share your own.

Stealth Bastard Deluxe is a competent little head-scratcher, then, and while the death of your anonymous clone subject is constant, it is rarely aggravating. This is a well-made example of how proper checkpointing and telegraphing is often the key to success in any good, perplexing platformer, and by the end of the game you’ll be gleefully convinced that the only espionage arsehole is whichever masochistic sod invented some of these bloody levels.

This review was written after spending 7 hours with the game. The developer provided VideoGamer.com with a download code.