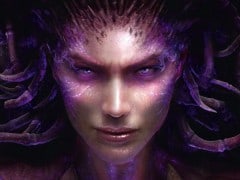 In an era in which additional content can take so many different forms, the classic PC staple of the ‘expansion pack’ no longer seems to be clearly defined. In the early days of Command & Conquer we’d happily shell out for a few new tanks and some half-baked missions. Whip out a similar offering these days, and we’d huff at any price-tag steeper than a couple of quid.

If you’re strictly only interested in the competitive online aspects of the game, Heart of the Swarm might seem a pretty raw deal. Recent tweaks to the user interface and online matchmaking progression system apply to both Heart of the Swarm and Wings of Liberty, but the ranking ladders and unit balancing in the expansion are entirely separated. Adding seven new units across the three races and changing a number of abilities and tech-trees has substantially altered the flow of the game, opening up a new range of viable tactics.

Siege Tanks no longer need to research siege mode, Hellions can transform into flame-throwing mechs, and the deeply fearsome Protoss Dark Templars are likely to appear much earlier in the game. Even before you investigate the new stuff, the multitude of minor changes can initially overwhelm. As a veteran of Wings of Liberty, Heart of the Swarm’s online multiplayer felt like returning to a nightclub after ten years: the music has changed, you don’t recognise anyone, and the moves you used to pull don’t work anymore.

Thankfully the new stuff they’ve added makes the tricky transition worth it. Protoss players gain three air units. The Mothership Core can use Mass Recall to warp your army back to base, while the massive attack range of Tempest ships are great for poking holes in enemy defences. Finally, the new Oracle unit specialises in the ability to harass, easily nipping in and taking out workers before most players will be able to react.

The Terrans gain the gloriously sneaky Widow Mines – which burrow underground and fire rockets at anything unfortunate enough to wander above – and the Hellbat, an alternate version of the Hellion buggy that essentially represents a tough-nut version of the Firebats from the original Starcraft. Despite only getting two new units the nature of the Terran force arguably sees the biggest change, moving away from a previous tendency to rely on bio more than mech builds.

Swarm Hosts repeatedly spawn tiny creatures that come in handy for bolstering both offense and defense, but players who’ve honed their micromanagement skills will have more fun with the Viper unit. Their gas cloud ability temporarily prevents enemy units from attacking, but their Abduct ability is even more fun. This sticky Zerg lasso grabs foes from far away, tugging them into the grasp of your main forces. The Viper is tough to master in the frenetic world of online matchmaking, but the accommodating pace of the solo campaign offers plenty of space for experimentation.

The tweaks to the overall balance of the game adds finesse you’ll appreciate after all the chin stroking, but the solo campaign of Heart of the Swarm is nothing short of balls-out amazing.

Through a series of varied and well-paced missions, Heart of the Swarm perfectly captures the nature of the Zerg by expertly channelling great movies. We’re all familiar with the chest-bursting antics of Alien and the sheer destruction seen in stuff like Starship Troopers, but the thrill of being the person in control of it all is pure fantasy-fulfilment for any sci-fi geek.

Dipping into the fiction behind the Zerg swarm, Kerrigan’s brood of slice-and-dice nasties will evolve throughout the nine-hour campaign, depending on explicit choices you make. Each unit has three unique upgrades that you can switch between as many times as you’d like, but you’ll have to choose mutation strains far more carefully. Tied into excellent mini-missions that further dip you into the lore, each unit in the game can be permanently altered into one of two notably different strains. Do you want grape-purple Banelings that can bounce up cliffs, or a breed that splits into two babby Banelings whenever the first blobby fella explodes?

Some mutation strains are more interesting than others, but by the end of the game you’ll be building armies that have been made to meet your custom designs. In contrast to the multiplayer mode’s careful balance the campaign is purely weighted towards instant fun, letting you stomp through lovely locales with an army of terrifying flesh-rending creatures. The ability to experiment and specialise with units creates constant opportunities to devise new tactics, ensuring that clever players won’t get bored.

Pro players will have a lot of fun here, but options remain for less skilled players: many of Kerrigan’s optional upgrades can be used to make micromanagement easier by automating the extraction of vespene gas or letting you increase your supply cap immediately. Heart of the Swarm’s greatest achievement is the ability to sideline most of the faff, letting you concentrate on all of the fun stuff.

The plot itself is equally satisfying, providing you’re comfortable with the space marine tropes. It’s a direct continuation of a story that began fifteen years ago; a slice of 1990’s sci-fi with a budget that would make FarScape cry. High-horse gamers can roll their eyes – I’m too busy getting lost in all the bombast. If you’ve been following the story of Kerrigan since the fateful day she was left on Tarsonis, the campaign finale won’t leave you disappointed. If you shamelessly play Starcraft games for their story then Heart of the Swarm is fantastic stuff, with a campaign that easily outshines that of Starcraft II: Wings of Liberty.

Missions which see you focussing on controlling Kerrigan – or some of the other cool chaps – feel a lot more like Diablo than Starcraft, especially when it comes to the brilliant boss fights that see you evading lasers and dodging missile salvoes. The campaign is a testament to the flexibility of the game’s engine – a later, space-set mission in particular – something that we’re only just starting to see the fruits of in the ‘Custom’ tab of Starcraft II, which supports and promotes a bunch of fan-made content.

There’s never been a better time to get involved with the series, which is why it’s a real shame that Blizzard didn’t have the balls to give their product its natural conclusion. The multiplayer and campaign go to great lengths to make themselves more inclusive for new players, and yet the requirement that you already own Wings of Liberty ensures that very few of these people will play it. For a campaign this excellent that’s a huge shame, but the damage is more substantial when you look at the competitive multiplayer.

Starcraft II’s influx of brand-new players created a matchmaking pool varied enough to sustain a huge range of skill levels when the game launched, while Heart of the Swarm feels like a much tougher crowd, comprising mainly of series die-hards. It’s a game that deserves to be played by anyone who owns a decent PC, but the hefty cost of entry grates against the ideals the game’s design seems to hold. It’s a price tag that’s arguably justified by the production costs behind the game’s iconic Blizz-sheen, but it still feels like they’ve made the wrong compromise.

Fewer people playing the awesome campaign is little more than a personal grumble, but barriers that prevent the scope of the multiplayer from blooming fundamentally damage the package you’re being sold. Blizzard might be masters of game design and aesthetic production, but once again greedy fingers seem to be ruffling up a fantastic game.

Thankfully this isn’t an issue on the scale of Diablo III’s auction houses, which crippled the game’s long-term appeal by trying to enforce a fictional economy. Kerrigan’s campaign probably won’t reach the audience it deserves, but Heart of the Swarm is Blizzard on top form.

Finished the campaign on Normal difficulty in just under 9 hours, played ranked matchmaking for 5 or 6. Probably played more than 150 hours of SC2/ HotS beta.

StarCraft II: Heart of the Swarm

The Zerg take centre stage in the second of three campaigns.

StarCraft II: Heart of the Swarm

The Zerg take centre stage in the second of three campaigns.