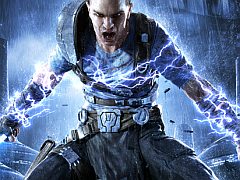 As far as sequels to multi-million selling titles go, Force Unleashed II is one of the most disappointing. It’s not that the first game was superb – it was merely an entertaining game set in the Star Wars universe – but that the sequel could, and probably should, have been able to better it. While LucasArts has created a fun, and at times visually stunning game, the campaign is over in next to no time at all and there are very few memorable moments throughout. The Force Unleashed II is, sadly, a by-the-numbers sequel which simply doesn’t excite as much as the original.

Despite dying at the end of the last game, you are once again cast as Darth Vader’s secret apprentice, Starkiller, but with a twist: you might be a clone. Vader insists you are, explaining how his many prior attempts all ended in grisly failure, but you and many others aren’t so sure. With flashbacks indicating that something isn’t right, you flee from the dark master in an attempt to find out the truth, and are quickly reunited with your friends. What follows is a fairly forgettable story, one that isn’t nearly as interesting as that found in the original, but enough to get you from planet to planet in order to fight endless waves of Stormtroopers, AT-AT walkers and ambiguous robot nasties.

Starkiller is a pretty badass warrior, highly skilled with his dual lightsabers and adept with the Force. This makes him more than a match for whatever Vader throws at him over the course of the five or so hour adventure (that’s right: five hours). Combat with your saber is quite basic, with just a single button handling strikes, but you can combo this with Force push and lighting attacks, while well timed blocks will repel projectiles back at enemies. It’s no Bayonetta (or even God of War) in terms of combat depth, but it’s good fun and, importantly, looks spectacular.

Another offensive option is using the environment. This can simply be pushing a trooper off the edge of a platform to his death, or lobbing an explosive barrel into a group of foes. Takedowns can be performed when up close, and larger enemies can be downed with successful QTE button presses once you’ve depleted their energy to a sufficiently low level. None of these are particularly taxing, but they generally look exciting enough to avoid becoming tedious.

As was the way in the previous game, your general stats and abilities can be upgraded through experience points, meaning that by the end you’re extremely powerful. The Force push is my favourite move to use, especially when maxed out, but the repulse ability – which sends a shockwave all around you – is incredibly handy for taking out large groups of enemies. In an attempt to spice up combat, certain enemies are immune to Force attacks, while others can only be beaten once hit by a certain strike.

Minute to minute gameplay in Force Unleashed II is good, solid fun, with the use of Force powers never becoming tiresome even after you’ve flung a Stormtrooper off a platform for the 50th time. Seeing a door open with tens of enemies behind it is never a bad thing, as you know it’s going to present some great opportunities for carnage.

Not so brilliant are the various large boss encounters. Usually boss fights are highlights in hack ‘n’ slash games, but here they feel laboured, unimaginative and sorely lacking in combat variety. One multi-stage battle against a giant enemy sums this up perfectly: It should be a showpiece moment in the game, but it’s far too repetitive to live in memory other than as an impressive use of the glorious Force Unleashed engine.

Thankfully the snipers from the original game have been toned down considerably, meaning there’s far less frustration while moving through levels. What isn’t so great are poorly placed checkpoints which force you to replay large chunks over and over again from scratch, and an awkward target lock-on system which frequently causes camera issues that get in the way of the combat. There’s also an issue locking onto objects that you want to throw about the environment, with the game often forcing you to tiptoe back and forth before you’re finally able to pick up the crate you’re after.

It’s impossible to overlook the brevity of the experience, too. At around five hours – maybe even less for skilled gamers – it’s considerably shorter than its predecessor and worse for it. While the original game had issues, it felt like it had a good pace and built up to its conclusion. The Force Unleashed II rushes so quickly to its finale that it seems like it’s over before it’s even got started. There are unlockable challenges to play once you’ve seen the end credits, but they aren’t enough to make up for a story that feels way, way too rushed.

What can’t be faulted is presentation. On Xbox 360 and PS3 The Force Unleashed II is a beautiful game, sporting some of the most impressive motion blur and rain effects I’ve seen to date. The aforementioned giant beast looks incredible too, while the lighting effects are top class. A minor touch is the ability to customise the colour of each lightsaber, so you can be walking around rocking red and green or, perhaps, blue and orange. There’s also a brilliant musical score, even if we’ve heard most of it before time and time again, and the voice acting is decent, but none of this can hide the fairly simple and repetitive game that lies beneath.

I had a real soft spot for Star Wars: The Force Unleashed, and that’s without even being a fan of the movies. Starkiller is a genuinely interesting and dangerous lead character, and I was excited to see how he evolved and the story advanced in the highly-anticipated sequel. That excitement has sadly been extinguished by a fairly insipid follow-up that does nothing to expand on and improve the original. It’s not a bad game by a long stretch – just a game that’s over in a flash and almost entirely devoid of any memorable moments.

The Force Unleashed II isn't a bad game by a long stretch - just a game that's over in a flash and almost entirely devoid of any memorable moments.
6 Core combat is fun Looks stunning Over far too quickly No fresh ideas