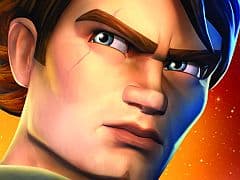 The woefully-titled Star Wars: The Clone Wars: Republic Heroes has clearly been created for young, male fans of the animated series, and not hardcore gamers. Does this mean it can get away with being crap? Of course not. There is no excuse. Developer Krome Studios can offer no justification for the awful graphics, horrible platforming and uninspired level design that Republic Heroes offers.

The game is structured with the shortest of attention spans in mind. Each level is a 10 to 15 minute blast through waves of Droids – the thin-faced Trade Federation robots from Episodes one to three – as either a Jedi or a Clone. As a Jedi (Anakin Skywalker, his grossly annoying sidekick Ahsoka Tano and the dour Obi-Wan Kenobi are playable among others) your main tool of destruction is of course the lightsaber, but a Force Push helps for shoving packs of Droids over platform edges. Despite Jedi being visual shorthand for cool in the minds of geeks across the world, Krome has somehow managed to turn playing one into a repetitive, bland experience punctuated by bouts of frustration and broken platforming.

The platforming really is awful. There’s an odd “snap to platform” mechanic that automatically makes your Jedi land where he or she should. This, in theory, sounds perfect for younger gamers, and negates any annoyance the awfully-positioned camera would bring. The only problem is, it simply doesn’t work. Well, sometimes it works, but, frustratingly, sometimes it doesn’t, and apparently for no reason at all. It’s as if a gremlin has holed up inside your console and decided it would be fun to switch the feature off and on again when you least suspect it.

As a result, you end up missing platforms and falling to your death all the bloody time. You wouldn’t mind viewing the action (action suggests, you know… action, but there’s hardly any) from angles that make gauging jumps difficult if the game always made you land correctly. But because it doesn’t, the camera makes platforming an exercise in counting to ten, breathing slowly and trying desperately not to tear your hair out. Sure, there’s no real punishment for death – either from a jump that ends up in you plummeting into nothingness or losing all of your health from Droid fire (you simply respawn) – but it starts to get annoying very quickly.

Swinging your lightsaber around, and combat in general, is a clunky, unresponsive affair. The animations are terrible, and your characters, especially Jedi, jerk around on screen as if having fit after fit. The game seems to think that tight collision detection doesn’t matter – sometimes you hit Droids with your lightsaber, sometimes you don’t. Republic Heroes’ hook is that you’re able to double jump on any Droid, (again a frustratingly random process as a result of the broken snap-to mechanic), “Jak” them with your lightsaber and ride them about as they blast their comrades to kingdom come. It’s a clever idea, but, like most of the game, is poorly implemented. Some Droids, especially those with rapidly-firing blasters, are useful and almost fun to ride. Most, though, are pointless.

The puzzle elements are equally uninspiring. Most involve mashing the Force button until a platform kicks in, or Droid-Jakking a robot that needs to be sent spiralling into a blockade to open the next area. It never gets any more complicated than that, and the puzzles soon feel like a pointless hoop that needs to be jumped through in order to progress. In fact, most of the game feels like that – an excuse to use powers that matter little in the grand scheme of things.

Strangely, playing as a Clone (Captain Rex and co are playable) is better than playing as a Jedi. Here, the game turns into an odd Geometry Wars style shooter where the left thumb stick moves your Clone and the right thumb stick directs and shoots your blaster. There’s grenade lobbing, a cover system and vaguely interesting puzzles. It’s almost good, but really it only stands out because of the mediocrity of the Jedi levels. It’s down to the fact that there’s no platforming required, and as a result the frustrating controls don’t get a chance to rear their ugly heads.

The level design is bland. Most levels are set either on a planet or aboard a spaceship, and never catch the eye. They feel more on-rails than a light gun shooter, and don’t allow you to backtrack to seek out missed collectibles. The surprisingly lengthy campaign feels all the more boring as a result. Nothing exciting ever happens. There are no standout moments, no bosses that bring the wow factor. All you get is a procession of braindead Droids that walk like lemmings to their doom.

As you’d expect, there’s absolutely tons to unlock. Upon completing a mission points are awarded that can then be spent on hats and masks, combat and Droid-Jak upgrades, cheats and even Droid dances. It might be interesting and a reason to replay levels if you were forced to think strategically about what to spend your points on – perhaps focusing on one area over the other to help tailor your playstyle – but there are so many points up for grabs that spending them feels redundant. Exacerbating the problem are one-off challenges that task you with destroying enemies within a time limit in a restricted area. These challenges spill out tons of points, making it entirely possible to max everything out after the first hour or so of play.

The game is better in two-player, where seamless drop in and drop out co-op at least works. It’s nowhere near as fun as LEGO Star Wars, for example, but you can see why the feature might be popular. It’s designed to try and get adult fans of the original Star Wars films playing together with their Clone Wars-obsessed kids. Unfortunately, the awful platforming ruins any potential bonding father and son might have enjoyed while playing the game.

In the game’s defence, hearing the voice actors reprise their roles from the animated series will help convince young Clone Wars fans that what they’re playing is the real deal, despite the fact that the dialogue, especially Yoda’s, is terrible (hearing Yoda say “Droid-Jak” is particularly soul destroying). And while the graphics are uninspiring and bland, they’re at least designed in the same Cartoon Network anime style as the show. But these slight positives are unceremoniously blasted into oblivion by the unresponsive controls and awful platforming. It’s obvious that adult gamers should avoid Republic Heroes. But, more damning, it’s also impossible to recommend it to anyone wondering whether they should buy it for a young fan of The Clone Wars.

It's obvious that adult gamers should avoid Republic Heroes. But, more damning, it's also impossible to recommend it to anyone wondering whether they should buy it for a young fan of The Clone Wars.
4 Voice actors from animated series reprise their roles Awful platforming Unresponsive controls Uninspired level design