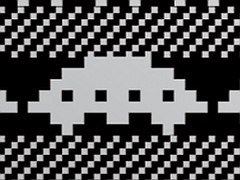 I imagine the majority of people reading this won’t have played Space Invaders or one of its million clones that appeared on various 8-Bit machines like the Commodore 64 and ZX Spectrum. The simple act of moving a cannon across the bottom of the screen, shooting evil alien space ships as they slowly made their way to you was at one stage the pinnacle of gaming entertainment. These days we quite rightly expect a lot more, so where does that leave Space Invaders Extreme on the DS and PSP?

Thankfully Extreme isn’t just the classic game given a snazzy makeover. The core gameplay remains as it was (cannon moving sideways across the bottom of the screen, shooting down alien space ships), there’s still a huge emphasis on high-score building and it soon becomes harder than it looks – dodging enemy fire takes concentration. Changes come from the arsenal of weapons at your disposal and the various different enemies and formations.

Weapon pick-ups fall from certain enemies (each colour dropping a different coloured block if you shoot four in succession). By default you fire your standard single-shot weapon which can be levelled up as you progress without dieing, but you’ll use a laser beam, Bombs and Broad shot at various times. Each of these has its own use and limitation. The laser, for example, can obliterate an entire row of invaders without too much trouble, but it is blocked by Reflecting Invaders. Bombs can take out a wide area of invaders and aren’t blocked by Reflecting Invaders, and Broad Shot is able to take out numerous invaders at once. A shield is also available as a power-up, protecting you from enemy fire for a short period.

For what seems like such a simple game the range of invaders you’ll encounter is surprisingly broad. As well as the normal kind you’ll face bomb invaders which explode and take surrounding invaders with them, armour invaders which take more damage, roll invaders which turn on their side, split invaders which split in two when hit, and many, many more. You’ll even encounter boss invaders at the end of each stage, which take up much more space on the screen and require you to target a weak spot. These are relatively easy to take out compared to the ever increasingly difficulty of the levels.

How you score points sounds complicated, but is pretty simple once you know what you’re doing. The game essentially uses a multiplier (displayed in the Rate gauge) which increases as you shoot down invaders in succession (called chaining). If you’re able to keep a chain going until you reach a multiplier of five and the Rate gauge is maxed out you’ll enter the Break state. Here you’ll have a multiplier of x10 for a short period, allowing you to rack up a massive amount of points.

You’re also able to shoot down flashing UFOs in order to enter a mini-game known as a Round. Here you’ll be tasked with taking down a set number of invaders within a certain amount of time. If you complete the Round you’ll return to the main game in Fever Time, during which your cannon’s weapon is greatly improved and invaders can be cleared very easily. Fever Time only lasts a short while (although it’ll last longer if commenced during a Break state) but it’s a great way to rack up points.

There is even more to the scoring system than that, but the core scoring mechanic is all about chaining and getting to the x10 multiplier state. Combined with some incredibly catchy music and retro-cool on-screen effects, Space Invaders Extreme is an assault on the senses. For some the effects might distract too much from the core gameplay, but there is an option to turn them off or reduce their brightness. I liked them, but hardcore high-score enthusiasts might prefer a blank canvas.

Functionally the DS and PSP games are the same across the single-player mode, but the DS has the clear upper-hand when we come to multiplayer. Both games feature head-to-head play for two players, with the core invader shooting gameplay being turned into a battle mode of sorts, with each player able to send invaders over to their opponent’s screen. It works really well, but is sadly much more limited on the PSP.

For less than £20 Space Invaders Extreme is worth every penny, whether you’re a DS or PSP gamer. The high-score hunting gameplay makes for an incredibly addictive retro gaming experience, and the sleek presentation gives it a modern appearance and feel. If you can choose between PSP and DS versions then the DS game is clearly the best choice. Online leaderboards are practically essential in a game of this type and it also makes playing with friends a lot more practical.