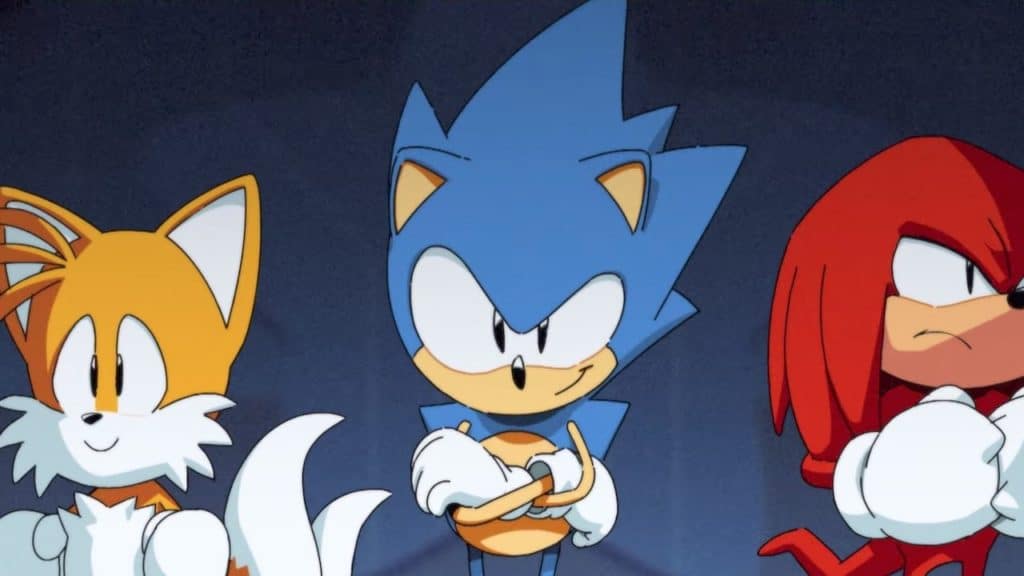 Sega had a winning formula with Sonic on the Mega Drive, but decided to throw it all away in the early 00s in favour of jumping on the 3D platformer craze. There’s been a smattering of ups along the way, but honestly, the hedgehog’s name has been dragged through the mud for years. Fans have never lost hope that a return to form has been on the cards, though. In many ways, Sonic Mania has been 23 years in the making.

Those distorted two syllables that play through your TV’s speakers when you boot up Sonic Mania, ‘SAY-GAH,’ are like a signal of intent from developers PagodaWest Games, Headcannon and Christian Whitehead. They clearly understand the want for an old-school Sonic, because they’ve been yearning for something similar. This is the game that would’ve been released on the Mega Drive 2; a 16-bit looking, side-scrolling platformer where Sonic, Knuckles and Tails must free little creatures from their robot prisons, and thwart Dr. Eggman’s efforts to nab all of the Chaos Emeralds. This is a project that’s obviously been crafted with as much love and care as humanly possible.

And having the picturesque Green Hill Zone as the first thing players see is a clever way to invite the ever rabid, but always optimistic, fan base back into the fold. That famous tune, that familiar layout, that unmistakable feeling. It’s the comfort of home. The light glistening off the impossibly beautiful water, the colourful plant life bopping around to the music, and the inimitable chequered mountain rock. Follow that with Sonic the Hedgehog 2’s industrial Chemical Plant Zone, with its accompanying bass-thumping soundtrack, and most will begin punching the air in delight. I can already hear the thousands bellowing ‘OOOOH, SO-NIC-THE-HEDGE-HOG’ to the air of Seven Nation Army in sitting rooms up and down the country.

You can play as either Sonic, Knuckles, Tails, or Sonic & Tails, with each having their own benefits: Knuckles the Echidna can glide through the air and climb walls; Tails can fly upwards to get to those hard-to-reach places; while Sonic is the fastest of the group, naturally, and is able to use a myriad of power-up boxes that the other two can’t. The fire shield makes players invulnerable to flames and allows them attack as a burning projectile; the bubble shield means you don’t have to worry about oxygen while submerged in water; and the lightning shield attracts nearby Rings to you like a magnet, as well as giving you the ability to double jump.

And while an awful lot of Sonic Mania is recognisable, subtle changes are noticeable throughout a number of the old stages. Remixed music is a constant fixture as you transition from act 1 to 2 in zones. And some new elements have been introduced to the old levels, forcing you to re-learn sections you know like the back of your hand. Quite honestly, even if you were well-acquainted with the Flying Battery Zone as a child, you may have forgotten that Sonic games were difficult at one stage, believe it or not. This is the antithesis of what modern Sonic titles are: they play themselves, while this doesn’t tell you a thing. You have to figure out that hammering the jump button while crouched initiates the Spin Dash, for example. It may be second nature to many, but not all — it doesn’t even tell you that Rings are your lifeblood. Getting the die hards onside is obviously very important, and I’d never dispute that, but there’s a barrier to entry if new kids want to join in on the fun. A simple menu screen at the beginning asking whether or not you’ve played a Sonic game before could’ve fixed that.

Because even as someone who has lived through the good times, the bad times, and the Big the Cat times, I found myself looking for more innovation, or at least some more new zones. Of the 12 featured in Sonic Mania, four of them have never been featured in a Sonic game before. I loved Lava Reef as much as the next child back in the Autumn of ‘94, but I’d sacrifice that and Sonic CD’s Stardust Speedway for another Studiopolis, or Mirage Saloon. I’d offload the blue sphere bonus stages for something different, too, because it’s plain to see (whether it be from the new levels, or the reworked, old ones) that the Mania team are in tune with what makes a Sonic game great.

They understand that moments of blistering pace are something the player is rewarded with for completing a more difficult platforming section, rather than the driving force of the adventure. They get the verticality seen in those classic games that offered up a few options in what route to take to the end-level signpost. They’ve grasped that the superior two-player versus mode in Sonic titles is the Competition mode seen in Sonic 2, rather than the muck we played in Sonic 3. They know all this because Sonic Mania has all this. They’ve nailed the feel that no one else could for the last 20 fucking years. But still, I want to look forward, rather than back.

Sonic Mania feels like a proof of concept — a really, really good proof of concept. This is something that the team can build upon going forward, and I sincerely hope they get the chance to do exactly that. This will appease a lot of folks, and for good reason: a good Sonic game has been released in 2017.

Available on: PlayStation 4 (reviewed on), Xbox One, Nintendo Switch, PC

It took two decades and change, but a team of developers has shown they understand what made the old Sonic games great with Sonic Mania, even if nostalgia is sometimes too much of a driving force.
7 A joy to revisit some recognisable locations, but... The Sonic game that fans have wanted for 20 years It leans a little too heavily on nostalgia