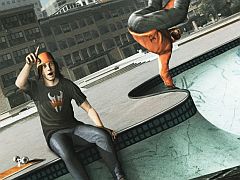 Skate 2 was all about becoming a big shot skater, working from the ground up to build a name for yourself. It echoed the path of the franchise itself, with EA having to establish the series as a contender in a market ruled by Tony Hawk. Now, having done all the hard work, Skate exists as brands that people know, but your in-game boarder is still trying to make it big. This time it’s all about brand awareness and selling as many boards as possible.

If you’ve been sheltered from the world of skateboarding video games for a few years and have somehow managed to miss out on what Skate is all about, here’s a brief summary. Rather than going for the almost arcade-like skating experience offered by Tony Hawk, EA’s Black Box studio opted to deliver an authentic sim, where players had all the abilities needed from the off. Stats play no part in Skate and even simple tricks take some learning and skill to perform.

As in Skate 2, body movement is mapped to the left analogue stick (ground and air), tricks are mapped to movements of the right stick (ollies, nollies, manuals, and flip tricks), grabs are on the shoulder buttons (you can grab your board while grinding or in the air), you have a face button for each leg (allowing you to do one-footers), a button for hand plants, and can tweak various tricks while in mid-air using the right stick. If this all sounds a bit complicated, well, that’s because it is.

Skate 3 offers two new difficulty settings (one which makes gaining speed and performing tricks easier, while a harder mode makes an already tough game even tougher to perfect), but even on the easiest setting you’ll need a good few hours to gel with the controls. Be warned that your right thumb is going to take a beating – as is your controller if you’re serious about getting good.

While Skate 3 shifts the focus away from liberating the heavily policed city of San Vanelona, you’ll still be taking part in similar activities. This time you’re in the brand new Port Carverton, a place that is more accepting of your four-wheeled pastime. By successfully completing challenges you’ll gain more reputation and in turn increase the sales of your boards – the end goal being to sell one million. As before, you’ll be performing tricks for photos, nailing lines for short films and owning trick spots. New to the series are Own The Lot activities and a variety of team challenges.

Own The Lot events are essentially a collection of trick challenges spread out over a fairly large area. Whereas most of the game’s challenges are in small parts of the city, here you’ll skate around and see much more of it, giving a greater sense of it being a real place rather than a series of locations connected by loading screens – such is the way you’ll usually hop from one event to another by using the Challenge menu.

Building up a team of skaters, each one customisable, is very simple and happens early on in the story. While skating with AI buddies gives you the sense that you’ve got a crew, the team events don’t really come into their own until you venture online and take part in team challenges with your friends. The entire game can be played online if you wish, with added bonuses for completing the challenges while connected to EA’s servers. Online functionality as a whole has seen a number of improvements, most notably in the sharing aspects. Photos, video reels and entire skate parks (the park editor is great, but a lot for skating newcomers to take in) can be shared with the Skate 3 online community, and doing so will help you reach your target of one million boards sold.

Social networking is a big deal in today’s games, so it’s a shame that EA didn’t go the whole hog. Considering the length we’ve seen developers go to in titles like Blur (which appears to be doing more with social network integration than any other game in recent memory) it would have been great to be able to share your best videos with your friends on Facebook or post a tweet linking to a really sickening bail.

And bail you will. A lot. It’s incredibly easy to miss-time your jumps and end up planting your face into a wall or the ground. Thankfully Black Box clearly knows this is a huge amount of fun and has once again included the Hall of Meat, a series of challenges built around causing as much pain to your skater as possible. As well as being able to guide your guy around while in the air, you can get into four different positions and even propel yourself off the ground once you’ve landed. Much hilarity ensues.

Where Skate 3 really excels is in how there’s always something to do or try to achieve. One part of the city has a statue of a shark hanging between two concrete structures that look awfully like ramps. We hadn’t been asked by the game to jump this shark and land on the ramp on the opposite side, but a good hour was spent trying to do it, with everyone in the office taking part. Later on, one of the game’s challenges that simply asked us to grind a sign and then gap a bush looked incredibly simple, but proved devilishly hard. Again, a group of five of us all wanted in on the action.

There’s no doubt that Skate 3 lends itself to pass the controller gameplay, but it’s completely bizarre that no offline party play modes exist. Whether just for challenges or for the Hall of Meat mode, the game doesn’t give you the tools that would make for highly addictive social gaming. Online play is great, but lots of people still prefer to play games while sat on the sofa with friends.

In terms of gameplay Skate 3 is an iteration of what came before, but visually you’d be hard pushed to notice any significant changes at all. The city is entirely new, which brings some freshness to proceedings, but the frame rate is still a little shaky, character models aren’t the best we’ve seen and there’s a general roughness to the environment. It’s far from ugly, with the low-down camera and fisheye lens giving the game a great sense of style, but use the higher camera (which for some will make gameplay a little easier) and things look quite bland at times.

Audio essentially boils down to the soundtrack, which features plenty of tracks that fit the skating culture perfectly. A large cast of skaters also appear and provide voice overs to their in-game characters, and My Name is Earl (and Alvin and the Chipmunks) star Jason Lee is always offering advice as Coach Frank. He’s a tad annoying, but adds some star quality. Also worthy of mention are the bone crunching sound effects that accompany nasty bails. More than once we’ve winced as our virtual skater’s body slammed into concrete at the most unfortunate angle.

Skate 3, to be blunt, doesn’t offer a great deal that’s different to the previous two games in the series, with the added team, online and sharing functionality being the key additions. That said, the core gameplay is as good as it’s ever been, the new city is great, and there’s no denying that the sense of achievement when you finally nail a trick after hours of practice is almost unrivalled in the sports genre. It’s more of the same, but the series is still in a league of its own.

The core gameplay is as good as it's ever been, the new city is great, and there's no denying that the sense of achievement when you finally nail a trick after hours of practice is almost unrivalled.
8 Great controls Online functionality is good Nothing fresh and new Graphics starting to look dated