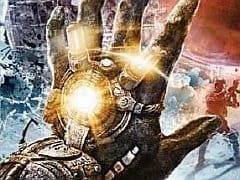 Half-Life 2 meets BioShock sounds like a good pitch for a first-person shooter. Two of the most popular and well received games of all time, squished together to create something that combines the best aspects of each, from a publisher with the financial might to make it a commercial success too. This was no doubt Raven Software’s dream when it started working on Singularity, but for whatever reason it arrived at retail with barely a whisper and, well, I expected the worst. It isn’t nearly up to the quality of the aforementioned classics, but it’s plenty good enough to tempt FPS fans.

Time travel and manipulation are central to the sci-fi goings on in Singularity. You’re cast as Captain Nathaniel Renko, a US military operative who is sent on a mission to scope out the abandoned Katorga-12 island. This place was used during the Cold War for research, in particular the study of the newly discovered Element 99 – a terribly unstable but incredible power source. Being a game about time travel, it’s not long before strange events occur, resulting in you being transported to the 1950s, where you rewrite history before returning to the present day. This travel between then and now happens throughout the campaign as you attempt to make up for your history altering actions.

To begin with Singularity feels like a fairly bog-standard shooter. You’ve got your usual assortment of automatic rifles, pistols, shotguns and sniper rifles. In use they feel like they lack punch, although that doesn’t stop them blowing enemies apart if used correctly. Gunplay is solid, and the later weapons (including one which fires bullets which can be guided from a first-person viewpoint) are more exciting, but it’s the time manipulation abilities that make Singularity a more interesting shooter.

After a brief opening sequence you acquire the Time Manipulation Device, or the TMD – powered by E-99. When you initially get hold of the device you can’t do much more than alter the age of objects, turning new things old and decrepit and old things new and shiny. It’s a bit gimmicky, but does come into play during the odd puzzle. Soon you’ll have numerous other time powers, including blue orbs that slow down everything inside them. You’re also able to levitate objects (like in Half-Life 2), repulse enemies using a kind of time blast, display your required path using a time echo, and more.

When you use the TMD during puzzles it’s great, but these aren’t nearly complicated enough. While perhaps an unreasonable expectation, the fact that only certain objects can be interacted with also hurts the believability of the game world. Why can I change the time state of that crate but not that door? There’s also a somewhat bizarre set of effects that the TMD has on enemies. Some will disintegrate while others will just slow down. I also can’t help but think that Raven missed an opportunity by not letting you visit different time periods.

Upgrades to weapons and powers can be made at special stations, using weapon upgrade tokens and E-99, which serves as a kind of in-game currency. These stations are very BioShock, granting you such upgrades as decreased reload times and greater stamina to allow for longer periods of running. It’s not really as exciting as the Plasmid upgrades in 2K’s classic, but allows for some degree of customisation.

Scattered throughout the levels are audio recordings (hello BioShock, System Shock and the rest), telling some of the backstory of the previous inhabitants of Katorga-12. You also get moments where previous events in time can be seen taking place in front of your eyes, giving locations a solid sense of history and making the curled up dead bodies more than just scenery dressing. There are loads of notes to read, too, each providing a little more background to events that took place on the island.

Raven’s game doesn’t feature the longest single-player campaign, but it’s enjoyable while it lasts despite not really capitalising on the potential offered by the TMD. There’s a 12-player humans vs monsters multiplayer mode included too, but it’s just not interesting enough to tear anyone away from the many superior competitive shooters already on the market.

Singularity has been made using Unreal Engine 3, but for a lot of the time you wouldn’t know it. At points, when the moody lighting is in full swing and the time effects are filling the screen, the game can look great, but at others it appears rather bland and lacking in the kind of sheen we’ve seen in action games over the last couple of years. The enemy designs are also rather generic, although are still effectively creepy in appearance.

Surprises don’t come along too often in the video game industry, but Singularity definitely isn’t the flop everyone expected it to be. With a bit more ingenuity in the puzzles, more made of the time travel and a little more graphical “oomph”, Raven and Activision could have had a real gem on their hands. It’s still well worth a look though, especially when it inevitably gets cut in price a few weeks down the line.

Surprises don't come along too often in the video game industry, but Singularity definitely isn't the flop everyone expected it to be.
7 Good background story Some smart time puzzles Visuals are mixed Multiplayer is forgettable