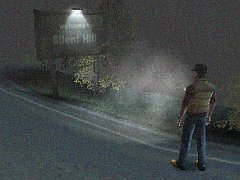 Travis Grady clearly doesn’t frighten easy. If Silent Hill Origins is anything to go by your average American trucker laughs in the face of evil occult rituals, sickening gore and half gimp half straight-jacketed demon freaks. And we haven’t even begun to talk about the rotten ‘I’m slightly disturbed to find attractive’ zombie nurses hell bent on tearing out Travis’ oesophagus and chewing on his intestines.

You see Travis faces all the twisted evil stuff that we all know and love from the Silent Hill series and he doesn’t even bat an eye lid. Me? You’d see a Wesley-shaped hole in one of the barricaded windows of the town hospital, Origins’ opening interior section, quicker than you can say “survival horror”. Unfortunately, or fortunately, depending on how sick your mind is, Travis is made of sterner stuff.

Unfortunate is indeed the word to describe Travis’ plight. Set seven years before the first Silent Hill game on the PlayStation, Origins reveals the secret behind how the famous foggy town got so screwed up in the first place. It stars the previously mentioned trucker Travis Grady, who is forced to stop, while out on a job near Silent Hill, by a mysterious figure on the road. Mistake number one: Travis gets out to investigate. He then sees a girl run off into the darkness. Mistake number two: he chases after her.

Our Travis then discovers a burning house and hears screams coming from inside. Mistake number three: he dives into the inferno. Inside, you discover the charred body of a small girl who you manage to drag out before collapsing with exhaustion (Travis feints a lot throughout the game). He wakes up on a bench in Silent Hill and, in the biggest mistake of all, decides to go to the local hospital to find out what happened to the girl.

If things weren’t weird before, it’s in the hospital that it all goes a bit freaky. You discover that touching certain mirrors transport you to the ‘Otherworld’, a more gruesome, disturbing version of the real world. You can flick from one side of the mirror to the other, like changing channels on a TV, at will, and you’ll find that you have to do this a lot as you solve the game’s intriguing puzzles, explore pitch-black corridors and unravel the secret behind the little girl and your own mysterious past.

Much of Origins is wonderfully executed. It does a great job of making you feel very, very alone, for example. The game doesn’t show us anything except Travis and his surroundings, making for a cinematic look that’s well suited to the PSP’s wide screen. There’s also a film grain effect – giving the impression that you’re looking at an old VHS recording.

And Origins’ creepy aesthetic is wonderfully complimented by series veteran Arika Yamaoka’s eerie and heart-pumping soundtrack. The game is silent and loud in just the right places. The game’s sound effects too are great, with meaty crashes when you smash a toaster over the head of a demon and suitably horrific groans and moans from Silent Hill’s disturbed populace. When you boot Origins up for the first time it will recommend you play with earphones in and the lights switched off – a bold claim for any game, but here it’s totally justified.

So Origins looks and sounds great. But does it play great? Fans of the series will be familiar with the controls and core gameplay (trying to open countless locked doors and flicking to and from your map to work out where you haven’t been). While the analogue nub moves Travis as he explores Silent Hill, the camera is fixed. Your view switches as you move from room to room, turn up corridors and move towards items of interest. It’s more dynamic than early Silent Hill titles for sure, but Origins still suffers the odd terrible moment where the camera will switch and you’ll be moving in the wrong direction. Who says games have come a long way in the last 10 years?

This problem with the camera is no more apparent than during the combat. Travis can pick up much of what has been left discarded by the people of Silent Hill, from TV sets to filing cabinets, and batter demons with them. He also gets access to guns, and nice ones at that, which are much more useful for taking down enemies before they get close enough to grapple – a new but unfortunately pointless feature. If something does grab onto you, you have to hammer buttons to shake it off. That’s it.

You hear enemies somewhere off screen but you can’t see them. They may be two feet in front of you, or 20. You just don’t know because the camera angle is often fixed (in certain sections you can force the camera to position just over Travis’ shoulder). So in tight corridors or small rooms combat can be very frustrating. There is an auto-aim feature (which removes any skill the combat might have required) that helps you tell if there are any enemies about, but overall the combat just feels underwhelming.

What prevents Origins from being an eight-out-of-10 for me is the save system. Aren’t we past only being able to save at certain areas of games nowadays? In Origins you can only save at red triangles sparsely dotted about the interiors of the game. For me this is a draconian game mechanic. Why can’t I save when I want? This is handheld gaming after all, which is supposed to be all about short, sharp bursts. I would save, progress about 20 minutes then die because the camera messed me up during a fight with a few demons. Then I would have to start all over again from that last save. On more than one occasion I thought sod it I haven’t got the time for this. Only the engrossing storyline and the need to play through the game for the review forced me to replay what I had lost.

It’s a tad sad, because Origins has some genuinely frightening moments and some really quite wicked ideas that will make you think twice about turning the light off before going to bed. One puzzle, which involves fitting organs inside a hospital guide dummy, made me pause before completing it for fear over what might happen. Another, involving working out what medication to fit into creepy dolls based on asylum patient cells is excellently executed. The horror in Origins puts most of the drivel Hollywood pumps out every Halloween to shame.

Origins has all the hallmarks of a great Silent Hill game, but it does nothing to eradicate the series’ faults. Predictably, fans of the franchise will find it more enjoyable than others – there’s plenty of references to the previous games and tonnes of back story to get your teeth into. That doesn’t mean that it’s not worth a try if you haven’t played a Silent Hill game before – it stands on its own as a solid survival horror puzzler. But it does mean that if you don’t like Silent Hill on home consoles, or you’ve grown tied of the series’ ageing formula, you won’t like it on the PSP.

Origins has all the hallmarks of a great Silent Hill game, but it does nothing to eradicate the series' faults. Predictably, fans of the franchise will find it more enjoyable than others.
7 Intensely moody Great visuals Save system is awful Main character is a little casual