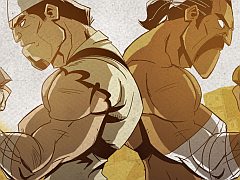 The connotations associated with protagonist Shank’s nimble and deadly namesake betrays his true self: a lumbering, brute of a man hacking his way across an expanse of hapless mooks. Powered entirely by muscle and rage, he neatly packs both the primal force of Schwarzenegger and the lightning agility of Bruce Lee inside his chunky, bestial frame. Meanwhile, the game’s aesthetic is equally prone to feeding off pop culture, its backdrop neatly riffing off Rodriguez’s and Tarrantino’s recent grindhouse revival.

He likes to kill things, basically. It’s certainly a stylish undertaking, and the hand-drawn 2D art is beautifully animated with a visual style similar to how I would imagine a collaborative work between Genndy Tartakovsky and Quentin Tarrantino to look.

Carnage is loosely justified by the plot: Shank’s mission is to get revenge on anyone who wronged him seven years ago in a preposterously uncalled for incident where his school teacher lover was brutally murdered, and he subsequently chose to wear a blood-soaked bandana for the rest of his days. I guess he couldn’t afford to buy a new bandana, what with all the revenge and all. If you need more back-story then you can either check out Kill Bill or play the game’s co-op prequel campaign, but it’s not really the focus. See baddies, kill baddies.

Our hero is called Shank and his favourite weapon is a shank. Funny that. He’s not actually that picky, though, and will merrily employ most weapons he comes across to help facilitate the game’s indiscriminate killing spree. The shiv is always your light attack, but you can switch between your various heavy weapon and guns at any time. The idea is to seamlessly mix-up the death-dealing with deft use of Shank’s hefty arsenal, but you’ll be far more inclined to find a mix that suits you and never waver: shank, chains and shotgun were my weapons of choice.

We’re safely within a comforting and familiar 2D brawler territory, albeit with a little spice added from modern action titles. There’s plenty of violent ways to end your grizzled and unlikable foes: Shank can pounce across the screen and land on his foes, smashing their brains out on the pavement, or eviscerate enemies with a grapple attack from the katana – when he unlocks it, that is. Limited and lobbable grenades can be conventionally flung or, alternatively, deposited in the mouths of enemies. There’s plenty of ways to dispatch your foes, basically.

But Shank’s main failing is that it never incentivises its desire to encourage beautiful play. Button mashing is all that’s really ever called for and, in most instances, is more effective than mixing up your tactics. Large, lumbering enemies, clearly included to spike up an otherwise nonexistent difficulty curve, can effortlessly ruin a foundling combo before it has a chance to blossom. It’s never a good sign when the most important tactic is the button mash.

It never properly gets to grips with what it’s trying to offer. Dynamic, free-flowing combat gets abandoned to make way for uneventful henchman set-pieces. Gun-toting enemies are put on higher ground, for instance – a particular favourite tactic of later levels – requiring Shank to fire his own guns into the air to take them down: an otherwise menial task made maddening by sloppy targeting and unresponsive controls. It, along with the tendency to throw in a couple of cheap opponents to create the illusion of challenge, makes it feel like the soul of the game is doing its best to not accommodate the players. Doing simple tasks, such as targeting particular enemies, is often an impossible pipedream.

Take the trusty explosive barrels, surely the best friend of any self-respecting video game protagonist. Not in Shank! They seem to do more damage to you than the enemies. Or my old friend the instant death drop. How are you? – I hope you’ve been well. I see you’ve spruced yourself up a bit, haven’t you? Oh, I’ve just remembered: you’re still bloody annoying.

It’s hard to tell whether these old mechanics were included out of a dutiful sense of homage or simply because Klei Entertainment was just looking for something easy to pad out the game’s brief content. Anything other than the basic combat with regular cannon fodder foes is poorly implemented and mostly unnecessary to begin with – not everything from the past is good. Just look at slavery and Victorian medicine, for instance.

That’s not to say Shank is bad, just that it has an uncanny knack of outstaying its welcome. And considering you can polish it off in just shy of three hours, that’s saying something. Mindless entertainment is all well and good but, at its worst, Shank’s gameplay is as ugly as the underworld of thugs, drunks and violence that make up the game’s universe.

Shank isn't bad, it just has an uncanny knack of outstaying its welcome.
6 Solid selection of weaponry Visually appealing Some poor design choices Drags on