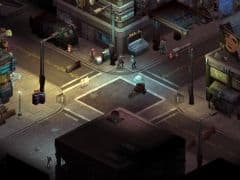 Shadowrun Returns’ first campaign feels like it was written by what D&D players would call ‘the stubborn storyteller’ – the dungeon master whose ‘important decisions’ always feel like they lead to the same place. Thankfully this story – and your interaction with it – are strong enough that, for the most part, this can be overlooked.

The combat itself is arguably a little too forgiving. Although it borrows ideas from games like XCOM: Enemy Unknown, with half/full cover and an overwatch mechanic, it certainly doesn’t share the same level of complexity. My group only failed once, after being forced to start a mission without purchasing medkits. The real danger comes from the fact that manual saving isn’t an option, a strange and frustrating omission.

That aside, the overarching challenge is figuring out the best way to spend your credits. After each chapter you return to your hideout with some form of reward, but you’re unlikely to be able to afford absolutely everything that you desire. Upgrades and progression aren’t slavishly tied to power-leveling – I even forwent cybernetics, instead remaining competitive by finding a balance between the upgrades, consumables and whichever mercenaries you want in your squad for the next quest.

There’s at least one more campaign in the works right now (supposedly set in Berlin), but the real future for Shadowrun, in my mind, will come from the players themselves via the bundled editor. A good start.

A good start, with the best hopefully yet to come.
7 Interesting storyline Leveling system is good Possibly a little too easy No manual save