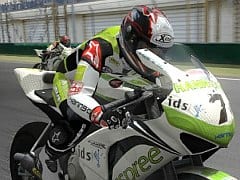 SBK 08 is a hardcore racing sim. Whereas the Xbox and Xbox 360 MotoGP games have been sims at heart but more than accessible to casual racing fans, SBK 08 is not. It’s a game that requires you to be not only in the right frame of mind but also 100 per cent committed to what you’re doing. If you like to play games while slouched back on a reclining armchair, drinking a beer and scoffing crisps every now and again, SBK isn’t for you, but if you quite fancy dedicating some proper time to get to grips with what initially seems an overly strict driving model, step right up.

There are really two parts to any racing game: driving and racing. In most racers you can pretty much take the two together, but in SBK 08 you need to have mastered your bike’s handling before you even attempt to compete against other riders. Trying to think about racing lines and where you opponents are is just too much for a beginner to cope with. We’ve been playing racing games, arcade and sim, for years, yet the harshness of SBK 08 still came as quite a sharp shock. Training it is then.

For a game so intent on punishing you for every small mistake on the track it would have been nice for developer Milestone to include an in-depth training mode, but it wasn’t to be. The game includes a handful of strict tasks, such as completing a lap without straying too far from the racing line, but these don’t really help you learn how to ride. You’re just as likely to learn by heading straight to the time trial mode and spending a few hours repeatedly riding around the same track. Quite dull, but essential if you want to compete in the full on Championship mode and gain all the medals in Challenge mode.

Championship mode sees you competing in a full season across all 12 SBK circuits. Each race weekend comprises of numerous practice and qualifying sessions and then two races, where your finishing place earns you points. Before each race you can tinker with your bike’s set up, getting all you can out of it, but it’s not for the faint hearted. If you want you can take advice from an engineer and effectively auto-tune your bike, which is probably going to be the best option for 99 per cent of gamers.

Challenge mode is split into a number of categories, with timed and scenario-based tasks for you to attempt. Timed challenges are basically glorified time trials with the added incentive of medals, while many of the others ask you to do things like perform a certain number of burnouts during a race or win a race against your rival while racing through the final few corners of a lap. These activities add a touch of variety to the game, but they’re still only really going to appeal to hardcore SBK fans.

Something followers of SBK and hardcore sim fans will be keen to spend some time with is the eight-player Xbox LIVE mode. It’s a rather no frills set up, but more than serviceable. The maximum player count of eight is a tad disappointing considering MotoGP has offered more for years, but online performance is solid. The smaller number of racers compared to full-on SBK races does lessen the experience somewhat, but competitive riders are still able to go head to head with equally skilled players.

Aside from the punishing difficulty, SBK 08’s biggest turn off for most gamers will be its visuals. It’s not an ugly game, sporting crisp visuals, a decent frame rate and an essential sense of speed, but it’s nowhere near as attractive as the latest MotoGP or many of the car racers available for the 360. The bikes, riders and tarmac all look passable, but the detail in the tracks and the surrounding areas is almost PS2 quality. Everything has clearly been sharpened up so you won’t see any rough objects as you hurtle around the tracks at high speed, but you won’t see anything that’s particularly pleasing to look at either. In-game there’s also a distinct lack of atmosphere. Some adrenaline pumping music would have made things seem a little more exciting.

SBK 08 has clearly positioned itself as a game for a niche audience. It’s hard to say for sure how well it appeals to those hardcore sim fans, but it seems to be an accurate representation of the sport. As a video game it doesn’t really cut it though. It’s a game that is so hell-bent on being realistic that it’s forgotten to be fun. With the fairly drab presentation not helping matters we can’t recommend SBK 08 over the far more entertaining and visually appealing MotoGP series.

While clearly having good intentions, SBK 08 is so hell-bent on being realistic that it's forgotten to be fun.
6 Hardcore sim Steep learning curve Drab presentation Ugly trackside detail