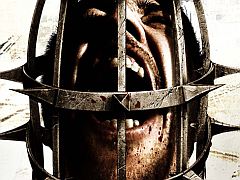 Saw is a bit grim really, isn’t it? While I did quite enjoy the original movie, the follow-ups have been cash-ins with one thing in mind: to be as utterly nasty as possible. Saw 2 the video game has similar intentions, and in that sense it’s accomplished its mission; unfortunately, somewhere along the line the dev studio forgot to make the game enjoyable.

The story is almost irrelevant to proceedings. All you really need to know is that you’re stuck in a maze-like building set up by franchise bad guy, Jigsaw – a psycho in bad need of a throat lozenge. And this isn’t a normal maze, oh no. While it’s a series of connected rooms that require smarts to get around, the real fun-killer is the fact that you’re thrown into a series of life-on-the-line challenges, usually built around dastardly contraptions. Sadly for you, these aren’t the kind you’d find on the Crystal maze, and the reward isn’t a skydiving experience. These tend to want to crush your face, blow you up or shoot your head off.

The challenges vary in how they play out, but you’re generally moving objects around, pushing switches, linking up circuits or using clues hidden on walls. On occasion the game manages to be a clever, but these moments are rare; often you’ll simply have to look through a hole to find the combination for a nearby padlock. The bloodthirsty trappings that accompany each of these events put you on edge and hide the simplicity somewhat, but before you’ve seen half of the short campaign you’ll be longing for it to end.

Combat is surprisingly rare, and when you do actually face an enemy you do very little. There’s no actual melee combat; instead you’re given a series of button prompts in order to take down foes – something that happens very quickly if you’re lucky enough to be carrying a baseball bat with nails sticking out of it. In a way it’s probably for the best that fights are handled in this way, as they’re completely painless in execution, but it does remove an area of the game that could have been tense and thrilling if handled with care.

For a game so focused on killing you and everyone else in the game, Saw 2 is disappointingly devoid of any real sense of foreboding. You begin to expect what’s coming, such as the often-repeated trap doors that require short QTE button presses to avoid being brutally mutilated. Some people may find it unnerving to crawl past a man who’s had the top of his head removed, or to walk into a room full of bits of exploded body, but to me these moments just felt grim for the sake of being grim. They certainly did little to build an atmosphere.

For a game so clearly rushed out the door Saw 2 doesn’t look too bad visually, and the use of the series’ trademark soundtrack and characters will please fans. It’s clearly not up to the standards of bigger budget productions, however, and there’s not a great deal of variety to the environments, which does make things drag towards the end. The character models are a few years behind what’s generally expected these days, but as far as positives go, the general production values are a highlight of an otherwise fairly sloppy title.

Whether or not you’ll get anything out of Saw 2 depends on how much you love the movie series. If all you want is a gore-fest, then this may well tick all the boxes required, but everyone else will find it lacking the things that make games great. It’s a survival horror game where survival really is the name of the game, but at points you might just opt to get your head caved in by a big metal helmet instead.

It's a survival horror game where survival really is the name of the game, but at points you might just opt to get your head caved in by a big metal helmet instead.
5 Visually it's competent Relies on gore over atmosphere Combat is almost nonexistent Puzzles become rather samey