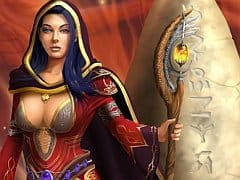 I was rummaging round Runes of Magic, Frogster’s free-to-play MMORPG, when my flatmate Dave walked into my room. “Why are you playing World of Warcraft again?” he said.”I thought you quit.” “I have,” I replied, eyes fixed on thwacking my fiftieth beetle of the evening. “This isn’t World of Warcraft.” “Oh yeah.”

Dave, as well as inadvertently giving me some colour to start this review with, nailed Runes of Magic on the head. It’s for all intent and purpose a World of Warcraft clone, with a remarkably similar art style, nigh-on identical classes, a carbon-copy combat system, a deja-vu inducing UI and exactly the same gathering and production skills as Blizzard’s behemoth. Loot-giving corpses even sparkle.

However, it is free. Completely and utterly free. The client’s a free download from the official site, and there are no regular fees. So, can Runes of Magic be criticised for all of the above, when it doesn’t actually cost anything? Well, of course. If someone gave you a packet of crisps, just for fun, but it was way past its sell by date, would you scoff them? Of course not.

That’s probably a bit harsh on Runes of Magic, which has everything you’d expect from a subscription-based Western fantasy MMO. It’s got six classes, a thousand quests, starting areas, 50 levels, mounts, instances, guilds, 36-player epic raid dungeons and all the rest of it. Indeed, one of the game’s main problems is that most fans of the genre will find it a case of been there and done that.

Which is especially relevant during the first 10 levels. The game begins with character creation: pick from the warrior, scout, rogue, mage, priest and knight, which work exactly as you’d expect them to. There’s only one race available – human – but you can pick your sex, and breast size, thank God. Then, beginning in starting area the Howling Mountains, it’s a case of kill x amount of x mob and bring x amount of x to this NPC.

After level 10, though, Runes of Magic starts to get a bit more interesting. When you reach the main city an NPC will let you pick your secondary class. Once done, you’re able to level them both up independently, switching between the two as primary and secondary classes. Not only does this affect the skills you’ve got available, but the gear you have equipped. So, as a priest mage, for example, you’ll have all cloth gear but healing and damage dealing spells to choose from. You could be a warrior rogue, or a knight scout, or any other combination, up to 30, in fact. It’s not a new idea, indeed many MMOs, including Final Fantasy XI, offer a dual class system, but here it’s well executed and adds much needed variety to Runes of Magic’s WoW-like experience.

You might be wondering, at this point, just how publisher Frogster’s going to make any money out of Runes of Magic. The answer is diamonds. Lots and lots of diamonds. With diamonds, purchased with real world cash, you pay for in-game items designed to give you a leg up in the levelling process. Examples include potions that increase by 30 per cent the experience collected in combat for all members of a group, or portal runes that transport you around the world, or clothes racks for storing armour in your customisable house (every character has a residence, kept spic and span by a sexy anime-style maid), or even a war horse, available to rent for seven or 30 day periods.

While the idea of buying advantage with your own cash will give many players the fear, it’s important to note that in Runes of Magic you can’t buy powerful armour or weapons. Only subsidiary items are available. In that way, you should never come up against another player in a PvP situation (restricted to duels at the moment) who’s got the edge because he’s considerably wealthier than you. And, really, if you have the time and inclination, there’s no reason to spend any money at all. The Phirius Tokens system allows you to cash in rewards from a number of area specific daily quests for many of the items that you’d otherwise have to pay for with diamonds. Because Frogster seems to have made such effort to make the game fully playable without the need to spend a penny, it seems unclear at this stage why anyone would.

Instead, the appeal, as the game’s title suggests, is in runes. Customisation is the order of the day here. Weapons and armour have slots in which you’re able to fix runes that grant statistical bonuses. You can do this for absolutely everything, and it doesn’t stop there. You can strip powers from new objects into a rune and attach it to your existing armour. You can even combine runes to form more powerful ones. In this way, it’ll be a rare sight indeed to see two players with identical gear, unlike WoW.

For me, Runes of Magic is impressive for a free MMO, perhaps even the best, but predictably it’s nowhere near as good as its subscription-based rivals, WoW and Warhammer Online. It doesn’t do anything particularly ground breaking, and in parts it’s shoddy – music will inadvertently cut out for no apparent reason, the text sometimes makes no sense, betraying its Taiwanese origins perhaps, and the graphics won’t knock anyone’s socks off, but it’s free, and, by all accounts, popular. The English-speaking PvP server tested is heavily populated, with LFG requests popping up in world chat every five seconds. The game world, Taborea, isn’t particularly big, but that’s much preferable to having a massive game world with content spread too thin. Runes of Magic’s 50 levels should keep players entertained throughout the grind, and the promise of regular free updates with new game content bodes well for the future.

For MMORPG newcomers, though, Runes of Magic will be utterly bewildering. There’s little in the way of explanation, the game isn’t particularly user friendly and it clearly assumes a degree of knowledge on how these games work. You have to imagine that Frogster’s missed a trick here: there’s bound to be one or two people who’ve been put off by MMORRPGs in the past because of the regular fees. Runes of Magic doesn’t explain itself well enough to appeal to them.

From whatever angle you enter Runes of Magic’s virtual world, don’t expect it to blow you away. But it works. Dave summed it up well: “So, what do you think?” “It makes me want to play Warcraft”. “Yeah.”

Runes of Magic is impressive for a free MMO, perhaps even the best, but predictably it's nowhere near as good as its subscription-based rivals.
7 Dual class system It's free No new ideas General lack of polish

Free to play MMORPG with micro-transactions.

Free to play MMORPG with micro-transactions.